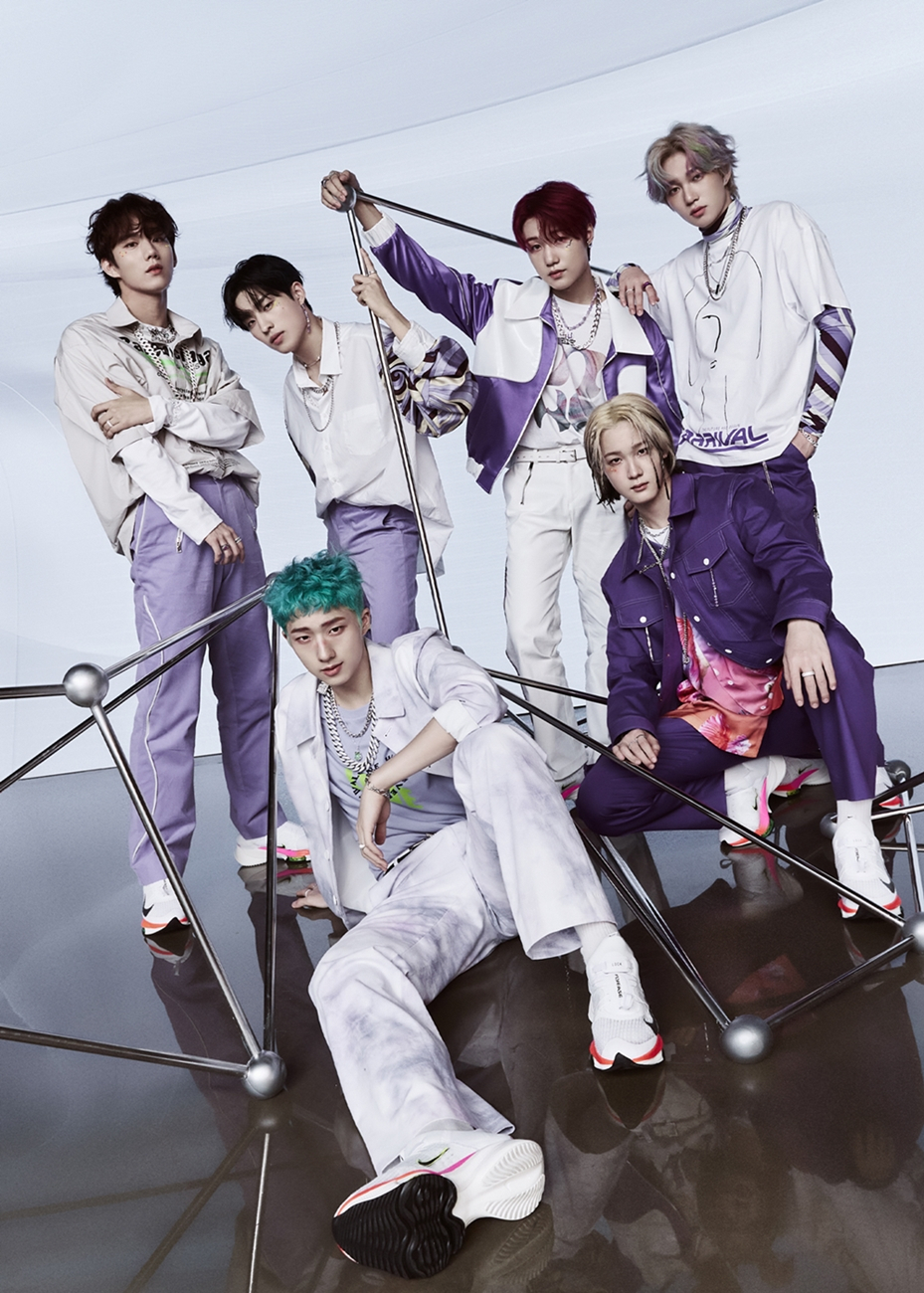 With their feet stable on the ground in their third year, P1Harmony hoped they could further expand and make themselves known in the coming days. Marking the start of that journey is fifth EP "Harmony: Set In," released Wednesday.

Before the album dropeed, the six-piece -- consisting of Keeho, Theo, Jiung, Intak, Soul and Jongseob -- invited local media for an interview Wednesday at the FNC Entertainment building in Seoul.

"One of my personal goals was to drop three new albums, and we achieved that for the first time this year. It was a good opportunity to show more diverse aspects of ourselves, and we worked hard in all ways, from the visuals to styles, the sounds and the music video," Keeho said during the interview.

The new album marks the second chapter of the act's "Harmony" trilogy, following the fourth EP "Harmony: Zero In." Through the album the boys speak about overcoming conflict through friendship to reach true harmony.

Fronting the album is song "Back Down," a powerful hip-hop dance tune that convey's P1Harmony's message: Stride forward together without backing down.

"We've turned more strong for this song. 'Back down' means to step back, and in the song, we're saying, 'I won't back down. Everyone who isn't my friend, back down.' I wrote the lyrics thinking about the team," Intak, who contributed to writing the song's lyrics, said.

Intak stressed that all the members put their heads together to show a new side of themselves.

"I think we felt different preparing for the song this time. It could show so many of our different colors. We felt we could show what we could do really well through this song. We hope it could take us to the next level," he added.

Jongseob, who took part in the lyrics-penning of all six songs listed on the album with Intak, said the five other tracks are more vibrant compared to the title song.

"I tried to make sure each song gave off a different mood. For example, if 'Look at me now' portrayed confidence about one's friendship, 'BFF' would be like chatting about secrets with friends. I wrote the lyrics for 'Better Together' thinking about the time when the six of us went on a trip together," Jongseob said.

In the short-lived career of a K-pop idol group, the third year plays a crucial role in deciding whether the group will last long, and P1Harmony seemed to have spent the year to its fullest.

"Although every moment is important, we think now may be the most crucial period that could decide whether P1Harmony can do well in the future. It was the first time that all six of us were satisfied with the music video. We hope we could garner more popularity through the new song," Theo said.

Having made a name for themselves, values like quality of music, gratitude for fans and genuine zeal for improvement are key factors impacting the group's longevity.

The six-piece seemed aware of this, and perhaps this is why the group has flourished this year. Kicking off the year with a successful first global concert tour, the group appeared on "The Kelly Clarkson Show" on Tuesday.

"Although our foreign fans may not know the Korean lyrics, there's the energy we give. And we emphasize communicating with the fans on the stage, making eye contact and getting closer to them, and this allows them to enjoy the show even without understanding the language," Jongseob said.

Keeho added, "I realized that music really has no language (barrier). It's grateful that I could do what I love, singing and dancing. And it's even more grateful as people keep on finding us for what we do, which just makes me work harder."

The bandmates said their next task was to make themselves more known.

"I think we need to make music that could appeal to more people in general. Ultimately, a singer shines the brightest on the stage. So, in essence, the stage and our performance is what's the most important to us. We want to make a concert where not just our fans but any people could come and enjoy," Theo said.

Meanwhile, P1Harmony will embark on their second global tour early next year.