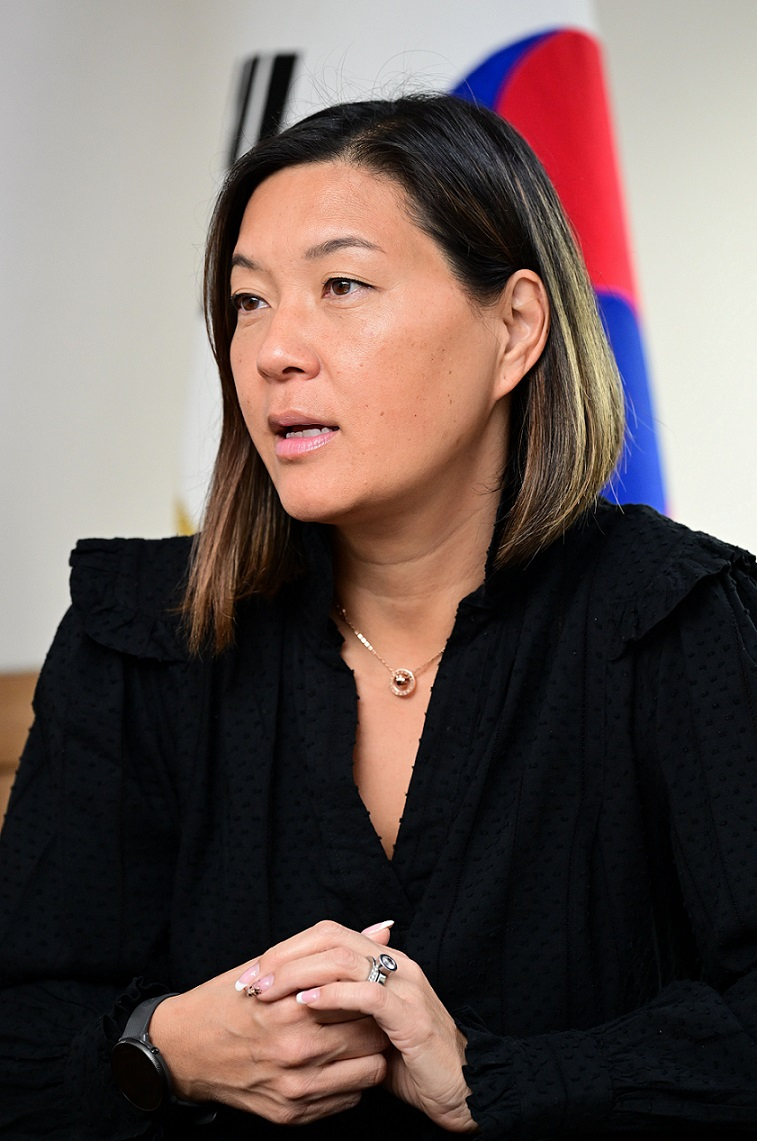 Karin Jensen, a 47-year-old Swedish police officer, had no clue that her business trip to Korea in 2018 would be the beginning of a long journey to discover her biological roots.

Born in Daegu, she grew up in Uppsala, Sweden after being adopted by a Swedish couple when she was 4 months old.

Having led a happy life with supportive parents and a younger sister, Jensen never felt a need to find her birth parents until she became a mother of two children -- a 13-year-old son and a 10-year-old daughter.

“After I got children of my own, I started to wonder what they (birth parents) look like. Also, I wanted to tell my children about my inheritance,” Jensen said in an interview with The Korea Herald in Seoul earlier this month.

With no memories of Korea, she found it challenging to search for her blood family. All she knew about her past was from her old Korean passport, issued in January 1976 for the one-way trip to Sweden: Her Korean name O Ok-hee, her date of birth Sept. 23, 1975 and the address of the Korean adoption agency. 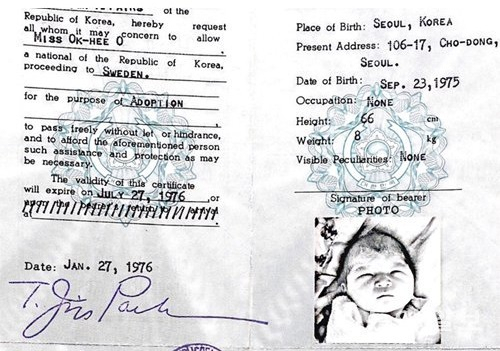 A photograph shows Karin Jensen's original Korean passport issued when she was adopted by a Swedish couple. (Courtesy of Jensen)

In October 2018, she came to Korea for a conference in Seoul. She was among 10 foreign police officers of Korean ethnicity. There she met Suh Joon of the Korea National Police Agency’s foreign affairs bureau, which doubles as the International Criminal Police Organization’s National Central Bureau in Seoul.

Suh offered help. He looked through old newspapers and searched the internet to find the local social welfare center that had handled her adoption. Fortunately, the institution was still running at the time. With the help of the center’s officials, he could then locate Jensen’s birth mother.

Earlier this month, after a yearlong process of DNA testing and analysis, Jensen finally met her biological mother in Daegu. It was 46 years after they were separated. She also met a younger brother she did not know existed.

“As soon as I went outside the arrival gate at the airport, my mother found me and threw herself into my arms and cried. The first thing she said was my Korean name Ok-hee. She kept repeating my name and saying sorry. It was so overwhelming,” she said.

The dramatic reunion brought some answers to many unsolved questions regarding her family history.

“I was told that my maternal grandmother decided to give me up for adoption because my mother was so young when she had me, and she and my father were not even married at that time. About a year after I was adopted to Sweden, they got married and my mother gave birth to my younger brother,” she said.

She also learned that her father had passed away when her younger brother was 2 years old and her Korean family name is Lee, not O as stated in the passport.

“I was very happy to meet my birth mother. She told me a lot about my family background. I actually hope that I could come back here with my own family in Sweden,” Jensen said, expressing gratitude for Suh’s efforts in tracing her roots.

Jensen was among nearly 6,600 children given up for international adoption in 1976. That year, the number of overseas adoption was sharply up from the previous year at around 5,000.

Nearly 170,000 Korean children were adopted overseas between 1958 and 2021. Last year, 45 percent of 415 new child adoptees in Korea or 189 were adopted by overseas families, according to data compiled by the Ministry of Health and Welfare.

In Sweden, Jensen’s main field of responsibility at the Swedish Police Authority is money laundering investigations. Jensen previously worked for the Swedish Air Force, specializing in cybersecurity, before joining the police in 2012.

Jensen recently collaborated with Interpol’s National Central Bureau in Seoul to investigate a case in which a Korean man was defrauded of more than 50 million won ($37,000) by a scammer who posed as his business partner using a fake email account.

"The Swedish bank got a notice from the Korean bank that his money transfer was fraudulent. The Swedish bank then reported it to the Swedish Police Authority and the investigation came to be conducted by the anti-money laundering unit where I belong. I asked inspector Suh if he could help,” she said.

In the end, the scammer had his bank account frozen and the Korean victim got his money back.

“Criminals don’t actually care about country borders. As for transnational organized financial crimes from phishing to money laundering, the victim can be in one country, the people who conduct the scam in another, and the person who receives the money transaction in a third country,” Jensen said.

"This type of crime happens very quickly. So, police authorities, banks, and other law enforcement across the globe need to work together."