King Sejong of the Joseon era, or simply Sejong the Great, is arguably the Korean who has left the biggest mark on the nation’s history. Every single day, people across the country use the monarch’s creation --- Hangeul, the Korean writing system.

How highly Koreans think of him can be seen in numerous instances. Among the many things named after him are a Seoul street, a city, a university, a performing arts center, a naval Aegis destroyer, a satellite and the country’s Antarctic research station. Then, of course, there’s the 10,000 won banknote graced with the portrait of King Sejong.

In time for the 576th Hangeul Day, which falls on Sunday and marks the promulgation of Hangeul in the mid-15th century, here are some of places across Seoul worth a visit in commemoration of the king and his great gift for the Korean people. 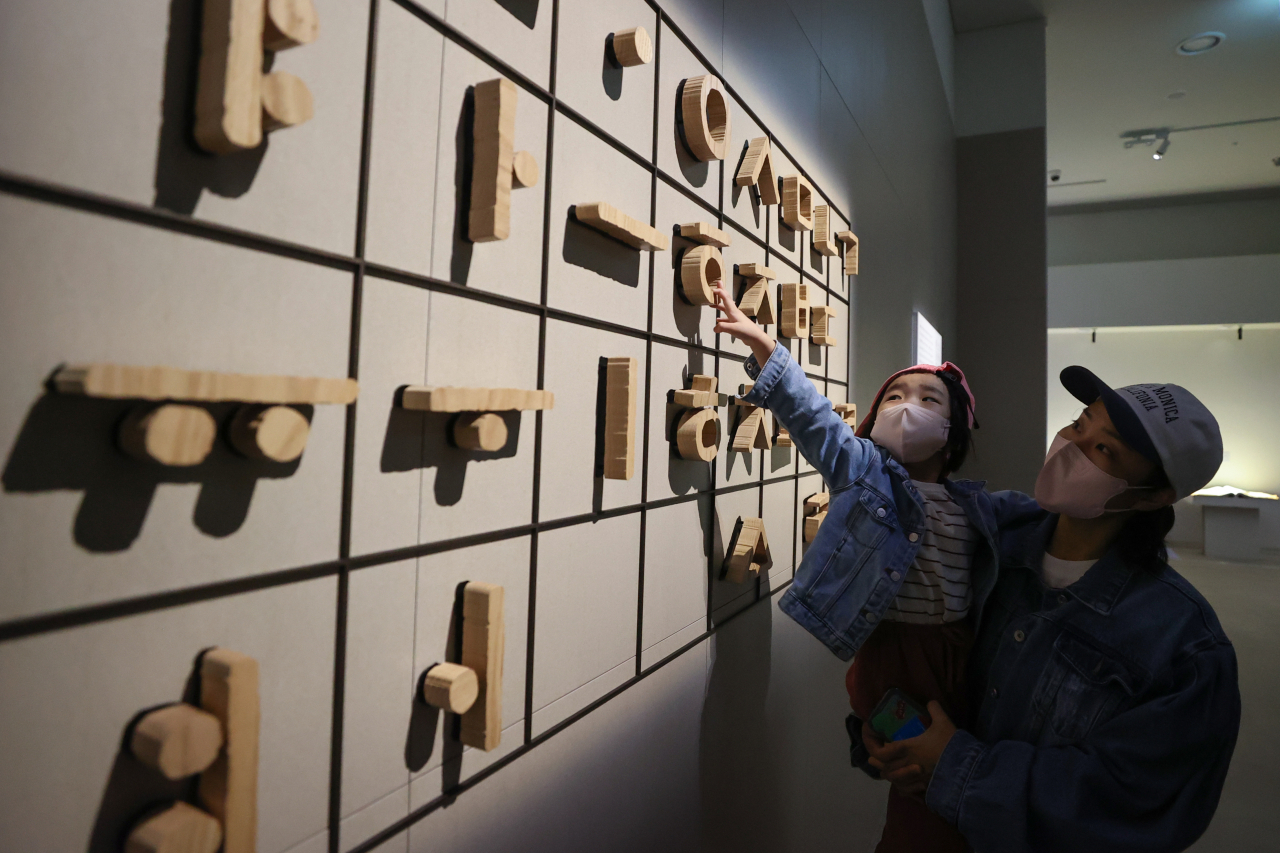 A child and her mother visit the National Hangeul Museum in Yongsan, Seoul, Tuesday. (Yonhap)

From Tuesday to Monday, the museum is celebrating Hangeul Week with performances, events and the "Reinterpreting Hangeul in the Modern Era" special exhibition. The museum is popular among Korean children learning to read and write, although it does have a section dedicated to foreigners learning Korean.

The museum is open 10 a.m. to 6 p.m., free of charge. It is closed on holidays, with Hangeul Day being an exception.

Aside from the permanent exhibition, “Reinterpreting Hangeul” runs until Jan. 29 of next year. 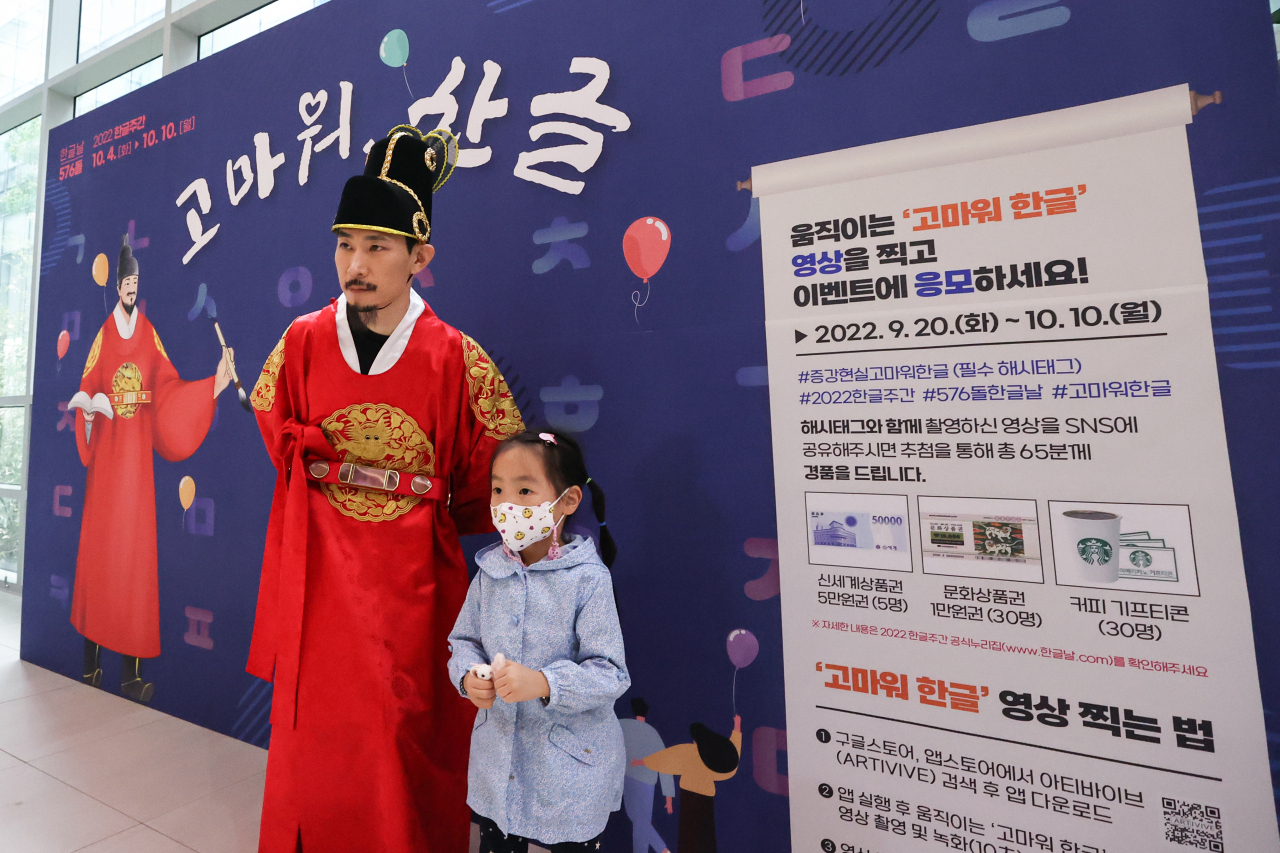 A child takes a photo with a museum worker dressed as King Sejong at the National Hangeul Museum in Yongsan, Seoul, Tuesday. (Yonhap)

For more information, visit the museum's homepage, which is provided in Korean, English, Japanese and Chinese.

In Seoul, a road called Sejong-ro connects all the major spots of downtown Seoul, including the main palace Gyeongbokgung, Gwanghwamun Plaza, Seoul Government Complex and the former presidential office Cheong Wa Dae. And the name’s owner makes an impressive appearance -- via a giant statue right at the entrance to Gwanghwamun Plaza. 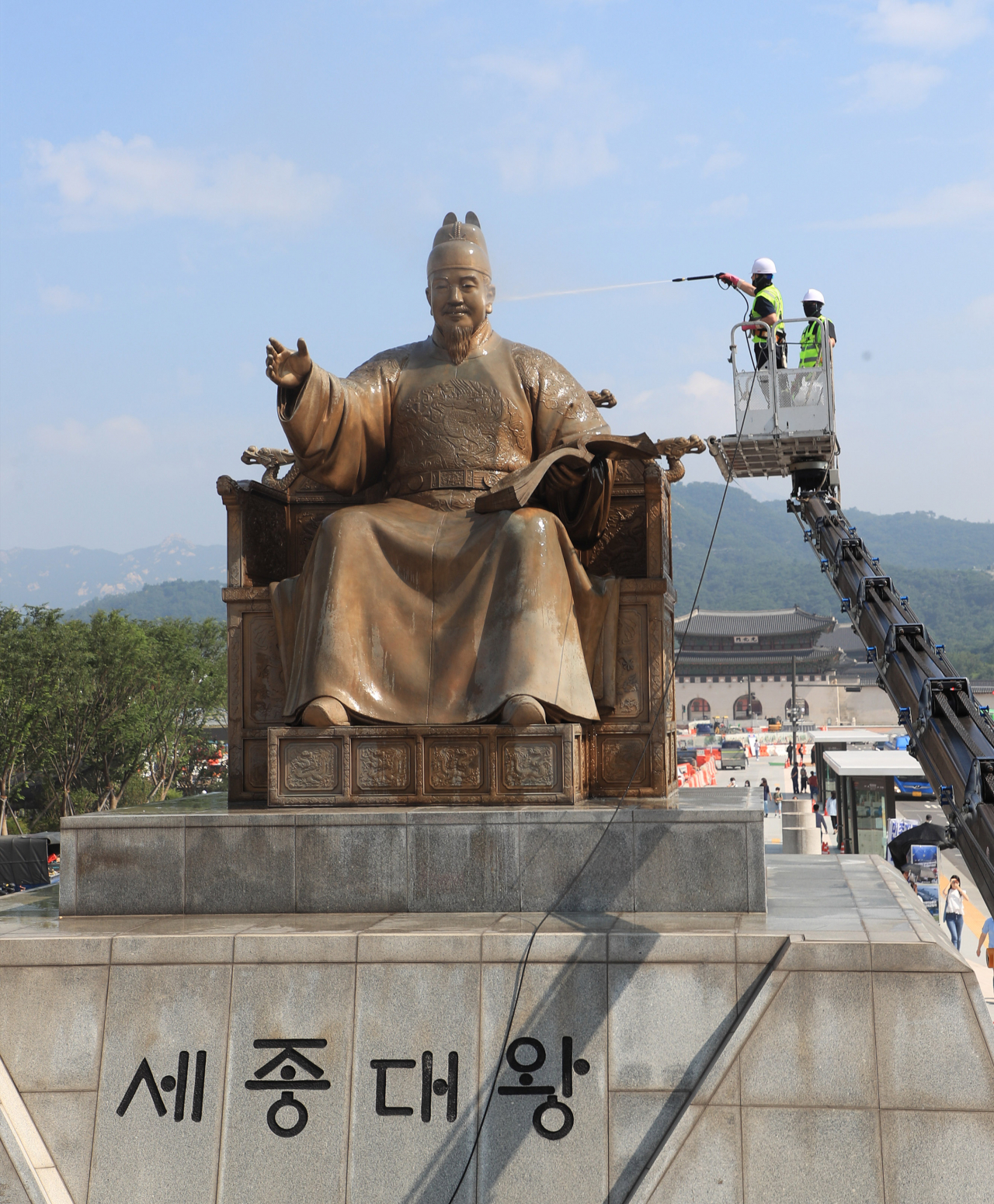 A little over 6 meters tall and 4 meters wide, the statue depicts the king looking over his subjects with a book in one hands, showcasing the fact that Sejong was an accomplished academic and an avid inventor. Displayed near him are models of inventions from his era, including Joseon’s first celestial globe that allowed the kingdom to study astronomy without using the Chinese system.

The statue is accessible from exit No. 9 of Gwanghwamun Station on subway Line No. 5, which also leads to the Sejong Center of Performing Arts. The building is used for high-profile performances and cultural events, but located on its underground level is an exhibition hall dedicated to King Sejong and another figure from the Joseon era, Adm. Yi Sun-shin.

The main exhibition is open from 10 a.m. to 6 p.m., free of charge, and is normally closed on Mondays. However, it will be open this coming Monday, and will instead be closed on Tuesday, Oct. 11.

The Sejong statue and underground exhibition are actually part of what the Seoul Tourism Organization calls the Hangeul Gaon-gil Course, a walking path that leads past major spots related to Korean writing. Right next to the Sejong Center is Hangeul Geulja Madang, a collection of rectangular sculptures carrying the content of Hunminjeongeum -- the book published under the commission of Sejong to explain how Hangeul works and how it was created.

Hangeul Geulja Madang is located at Sejong-ro Park, which is next to the Seoul Government Complex. Walking further down Sajing-ro 8-gil, one would come across a residential complex called Yong-bi-eo-cheon-ga. While not much stands out about this building, it is the site of Ju Si-gyeong’s former home.

Ju Si-gyeong, born in the waning days of the Joseon era and who died in the early 20th century, is a linguist credited with establishing the coherent system of Hangeul, including its grammar and spelling rules. He was also among the most avid educators of the writing system, and his feats are considered crucial in Hangeul surviving Japan’s 1910-1945 colonization of Korea, during which using the Korean writing system was forbidden.

While the city specifies the spot as a place to visit, not much is there to see today, but a small memorial says this was where Ju lived.

Turning left onto Saemunan-ro 3-gil and walking a couple of minutes more, you will come across Ju Si-gyeong Garden. The small park with a monument explains the great scholar’s accomplishments, along with a sculpture that symbolizes Hangeul.

This is also near Sejong Art Garden, which is a small garden located behind the Sejong Center with another sculpture symbolizing Hangeul.

Those still wanting to know more about Sejong can also visit the King Sejong the Great Museum located in Dongdaemun-gu, open 9 a.m. to 6 p.m., except Mondays. It consists of information related to Sejong's life, the creation of Hangeul and his scientific accomplishments. The fee is 3,000 won for adults and 1,500 won for minors.