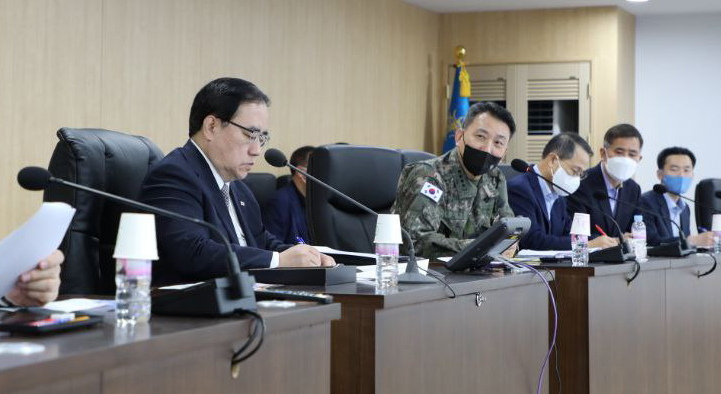 The presidential National Security Council strongly condemned North Korea's launch of two short-range ballistic missiles into the East Sea on Thursday, warning of strong countermeasures as demonstrated by the redeployment of a US aircraft carrier into South Korean waters.

President Yoon Suk-yeol was briefed immediately after the launch and the NSC held a meeting presided over by National Security Adviser Kim Sung-han, according to the presidential office.

Thursday's launch was the North's sixth missile test in under two weeks.

The council "took note that the latest provocation was carried out as the U.N. Security Council was meeting to discuss North Korea's ballistic missile launches, and strongly condemned it as a challenge to the international community that cannot be overlooked," the presidential office said in a statement.

The council also "warned that North Korea's provocations will be met with an even stronger response, as demonstrated by the redeployment of the Ronald Reagan US aircraft carrier strike group to the East Sea" following the North's launch of an intermediate-range ballistic missile on Tuesday, it said.

The council vowed to further strengthen the South Korea-US combined defense posture and security cooperation between South Korea, the US and Japan, while preparing thoroughly against additional provocations by the North. (Yonhap)