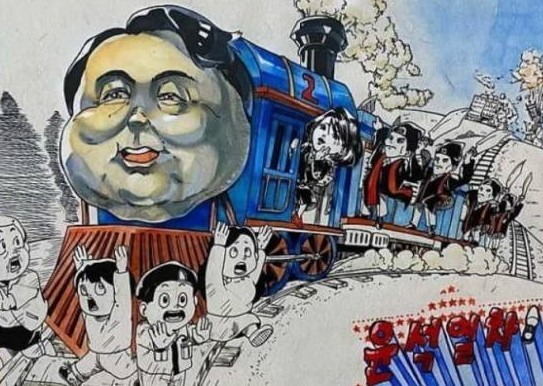 A cartoon featuring a figure resembling the well-known British comic book character Thomas the Tank Engine, an anthropomorphic blue steam locomotive in the children’s television series “Thomas the Tank Engine & Friends,” found itself at the center of controversy over freedom of expression Tuesday after the Culture Ministry said it would look into how the work was selected for the top prize in a recent contest.

Titled “Yoon Suk-yeol-cha,” the cartoon by a high school student won the gold prize at this year’s National Student Comics Contest, part of the 25th Bucheon International Comics Festival that came to an end on Monday. The cartoon, whose title is a combination of the name of South Korean President Yoon Suk-yeol and “yeolcha,” a Korean word meaning train, was on display at the Korea Manhwa Museum during the BICOF, along with other winning works.

The satirical drawing depicts Yoon in the form of Thomas, his wife Kim Keon-hee as a train driver and people running away from the train.

The cartoon went viral when an anonymous person uploaded the image on a local online community site.

While many people said they were impressed by the realistic depiction and the student's perception of Korean society, controversy erupted as some questioned whether it was appropriate for the Korea Manhwa Museum, a museum dedicated to cartoons, to display such a drawing. Critics alleged that the political bias of the cultural figures judging the contest led to the cartoon being selected for the top prize.

The organizer refuted such allegations.

“In order to ensure fair evaluation, the Korea Manhwa Contents Agency (KOMACON) -- the organizer of BICOF -- is excluded from the panel of judges. Various experts from Korean comics industry scored the students’ submissions and the winners were chosen on Sept. 13,” a KOMACON official told The Korea Herald on Tuesday.

According to the agency, the National Student Comics Contest, now in its 13th year, allows students to submit works on any theme.

On Tuesday, the Ministry of Culture, Sports and Tourism issued a warning to KOMACON for awarding and exhibiting an “inappropriate” drawing at this year’s National Student Comics Contest. This warning raised concerns about violation of freedom of expression among the public.

“As the drawing goes against the contest’s initial purpose of inspiring the students’ desire for creative drawing, we regret to warn the KOMACON. The ministry will reexamine the judging criteria, investigate the selection process and take appropriate measures,” the Culture Ministry said in a press release Tuesday.

An official at the Culture Ministry told The Korea Herald that measures against the KOMACON are yet to be decided.

Jang Hye-yeong, a lawmaker of the minor progressive Justice Party, said that the Culture Ministry may have felt pressured into criticizing the drawing.

“I personally think the satirical drawing does not violate or discourage young students’ desire for making creative work. The ministry seems to be walking on eggshells when it comes to the presidential office,” Jang told The Korea Herald.

A former documentary director and a graduate of Korea Animation High School, Jang said, “I am concerned about the possibility of many cultural organizations who are sponsored by the ministry, starting to censor creative projects so as to not create social controversies and continue receiving ministry support.”

An official from the presidential office said at Tuesday's press briefing that the office would not make additional statements concerning the issue and asked to refer to the Culture Ministry’s statement.