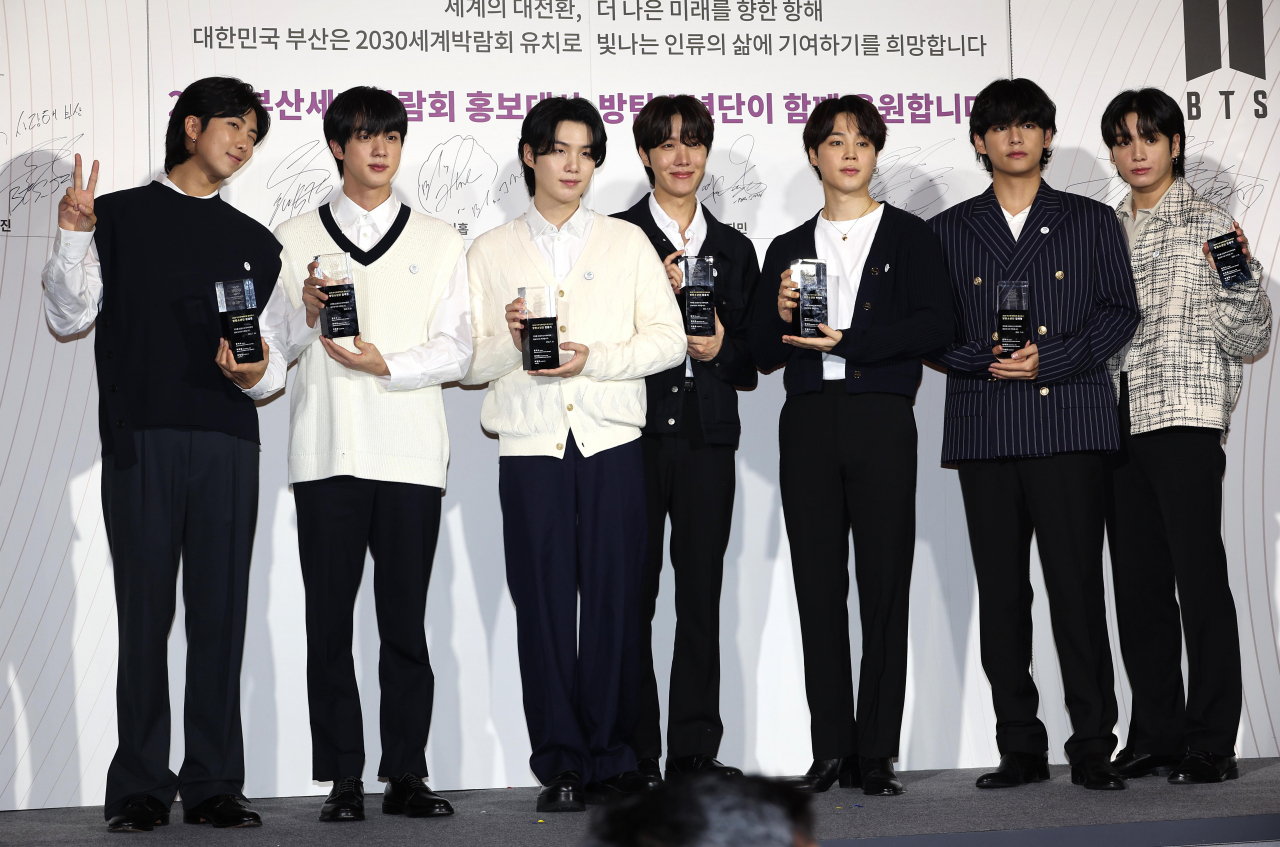 BTS poses for a picture at the group's appointment ceremony as honorary ambassadors for the 2030 Busan World Expo at Hybe's headquarters in Seoul on July 19. (Yonhap)

In a statement released via email to local press on Thursday, Hybe said, "Hybe and BTS feel proud in contributing in a national affair. Until now we have been focusing more on making a meaningful outcome than on the expense," adding that the company and BTS "will support the bid for 2030 Busan World Expo and we hope that BTS' concert could become the chance to bring global attention to Busan."

On Oct. 15, the K-pop septet is set to hold its "'Yet To Come’ in Busan" concert at the Asiad Main Stadium for free in support of the city's bid to host the 2030 World Expo. The gig is taking place as part of Hybe's deal with the Busan city government to cooperate in the city's efforts, whereby BTS was appointed as promotional ambassadors for the Busan Expo.

The rebuttal from Hybe comes amid growing controversy over expenses incurred in holding the concert, expected to amount to at least 7 billion won ($4.97 million). Hybe had stated the cost would be covered through various means, including corporate sponsorships, online stream ads and other incidental business activities by the company.

In the statement, Hybe said, "We understand that the expenditures generated in hosting events cannot be covered through government resource and have always maintained a cautious approach on receiving any financial support from the government as it comes from tax paid by the people."

"The same goes with the expenses coming with the Busan concert," Hybe continued. "The administration, the local government and the expo bidding committee have offered us the concert venue and are trying their best to support us within those limited budgets. Furthermore, we believe it will not be fair for the government and the companies working for the expo bid to make a large investment for the Busan concert."

Hybe made it clear, however, that expenses cannot be spared toward their efforts to bring about the best result.

"There is one thing that we cannot yield, and that is the quality of BTS' stage. The stage quality of the world's best artists cannot be compromised just because it is happening for a national cause," the statement read.

"If we had prioritized the expense made in BTS' participation in a national affair until now, it would have been difficult to achieve such great outcomes at major international and local events," Hybe said in the email, adding, "All we can do is committing our best efforts to ensure the quality of BTS' Busan Asiad concert and other subsidiary events and focusing on bringing out the best result."

Hybe added that the bandmates of BTS would voluntarily not be paid for the Busan concert.

"BTS is featuring in the upcoming concert at no cost, which results from the artists' long-held wish to hold a concert free-of-charge for fans," Hybe said.

Originally planned as a 100,000-capacity concert in a venue in the Gijang area of the shoreside city, with an extra 10,000 audience members joining through a real-time broadcast in a separate venue, BTS' gig was downsized after its relocation to the Asiad Main Stadium due to safety concerns. Hybe anticipates the event to gather around 60,000 concertgoers to Busan, with 10 million joining in an online stream.

"The 2030 Busan World Expo will create an economic effect worth tens of trillion won, and, as a single event, it is even larger in size when even compared to the World Cup," the K-pop firm said. "We hope the concert brings the international spotlight onto Busan."