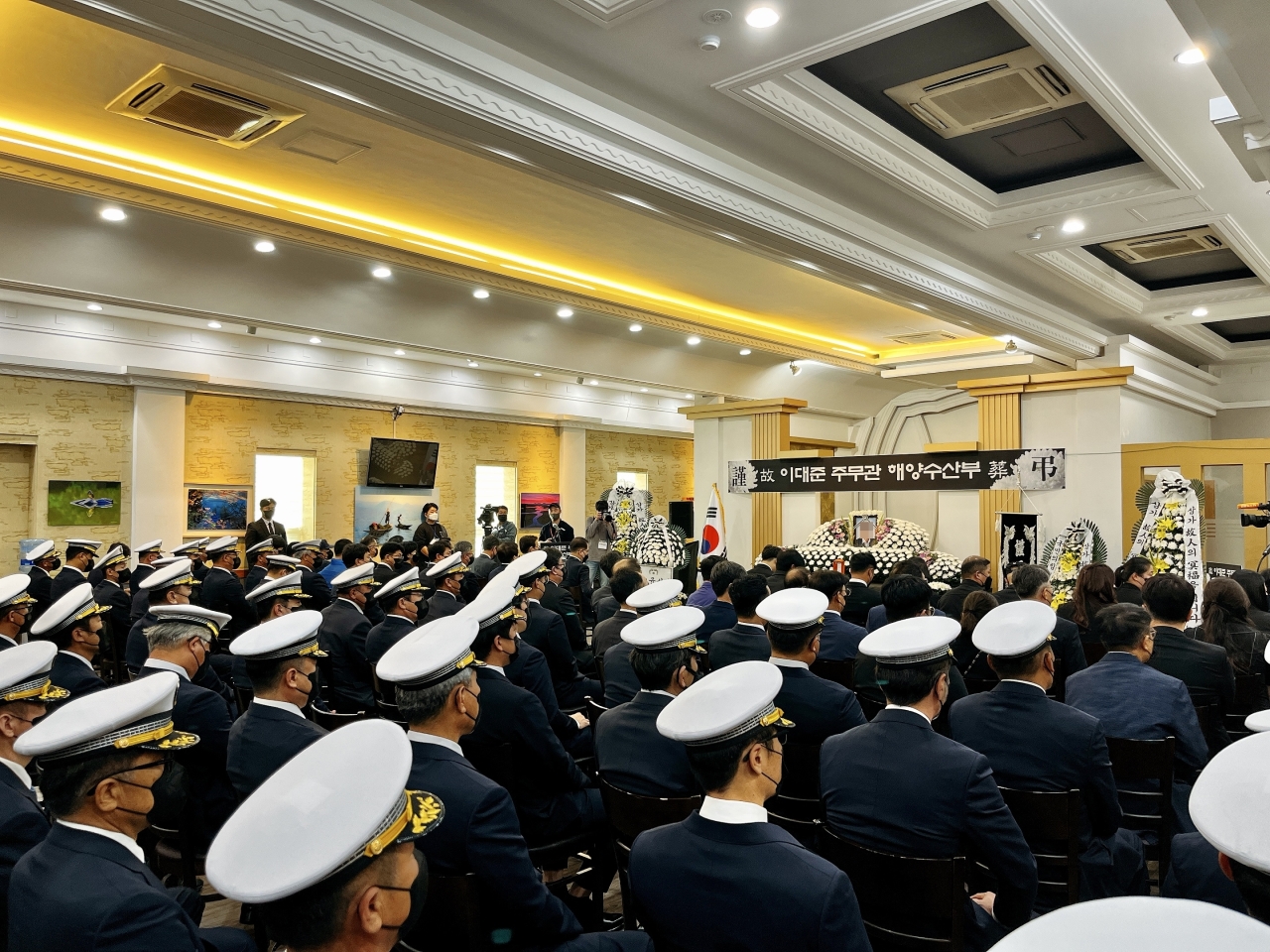 At the service held in his hometown Mokpo, South Jeolla Province, over 100 people turned up to pay their final respects to Lee. The service, which was not open to the public, was attended mostly by relatives and former colleagues at the Ministry of Oceans and Fisheries.

President Yoon Suk-yeol sent flowers, and his senior secretary for state affairs planning Lee Kwan-sup was among the mourners at the funeral.

Minister of Oceans and Fisheries Cho Seung-Hwan told reporters before the funeral that at the ministry, Lee will “always be family.”

“For over seven years of his service at the ministry, Mr. Lee, as the fisheries inspection official, worked on the sea. Until his last day he was serving his country in the dangerous waters off Yeonpyeongdo,” he said. “My deepest condolences for his family, who had to wait two years to give him a proper farewell.”

Lee’s fellow crew member remembered him as being “devoted.” “He did not hesitate to put his country first before himself,” he said in a letter that he read out before guests.

“It’s taken two long years for Mr. Lee to be back home. We know that the Republic of Korea is where he longed to be in his final moments and where he was supposed to be all along,” Rep. Ha Tae-keung of the ruling People Power Party said in a eulogy.

“Mr. Lee was denied a funeral for so long because he was branded a North Korea defector. His family has patiently fought to restore his honor and prove that he was not an attempted defector.”

Ha said that last week when he and Lee’s older brother, Rae-jin, met with the parents of Otto Warmbier they have shared with them their experience of not giving up fighting.

“The many families of victims of North Korea’s human rights abuses have had no way to bring them to account. That is no longer going to be the case,” he said. “We are going to hunt down the North Korean regime’s assets all over the world and see that justice is delivered.”

Speaking at the service, Lee Rae-jin said in a message to his brother, “Daejun, you’ve been through so much. I hope you can rest in peace now.”

He said what helped him get through most was support people have shown for his brother and the family, and thanked everyone for coming. 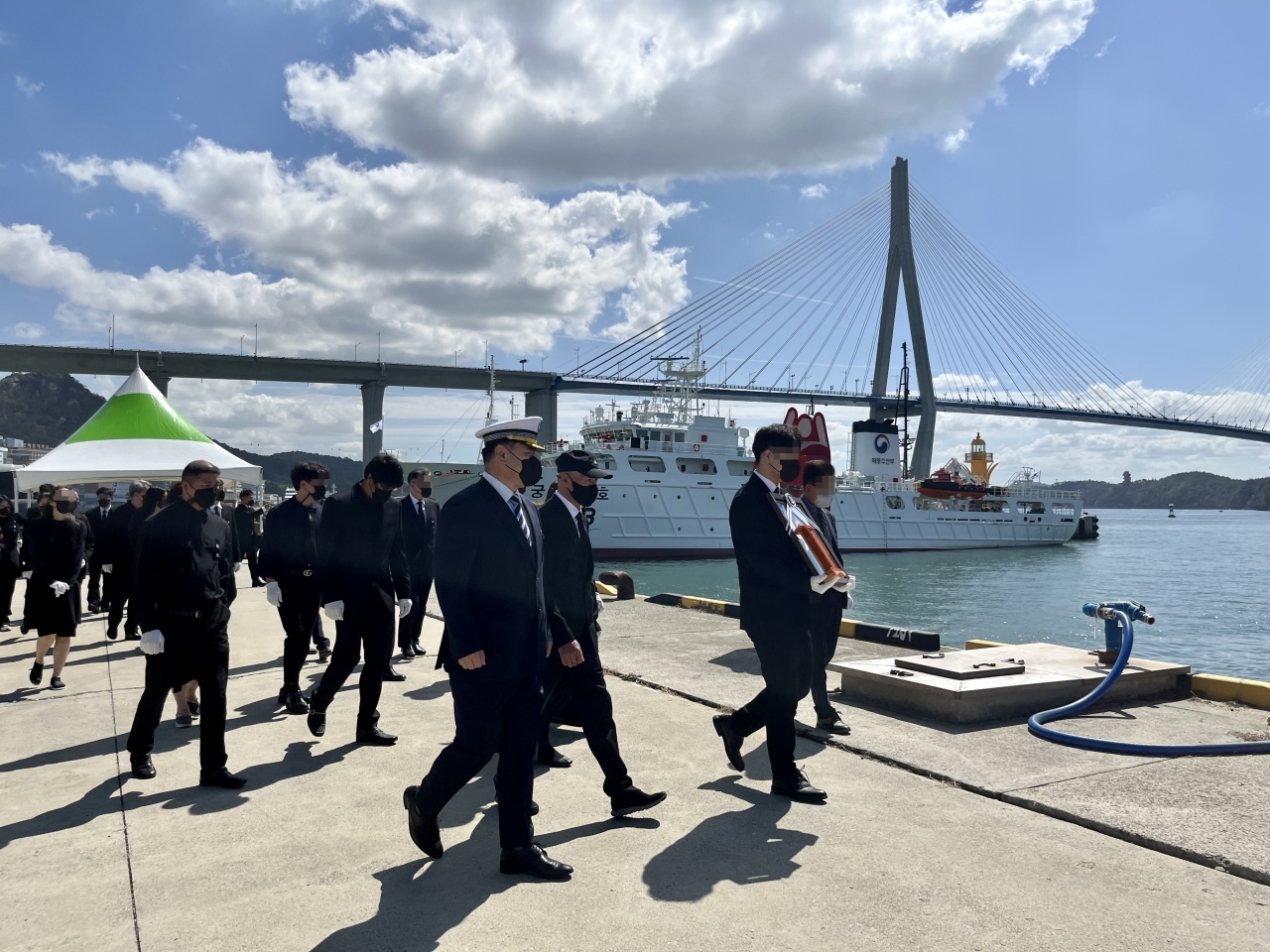 Family members take a final look around Mugunghwa No. 10, the fisheries patrol vessel where Lee last served. Lee’s son holds his father’s portrait in his hands. (Kim Arin/The Korea Herald)
Following the funeral, the West Sea Management Service under the Fisheries Ministry gave him a final send-off at the quay with Mugunghwa No. 10 --the fisheries inspection vessel where Lee last served -- moored alongside.

Lee’s son, 20, held a portrait of his father in his hands as the family took a last look around the vessel and his workplace.

Along the both sides of the procession, the fisheries officials saluted the Lee family. The vessel sounded three prolonged blasts in his honor.

On Sept. 21, 2020, Lee went missing in waters near the island of Yeonpyeongdo just south of the inter-Korean sea border while he was on patrol. The next day he was captured by North Korean soldiers, who shot him and then burned his body. He was 47 years old.