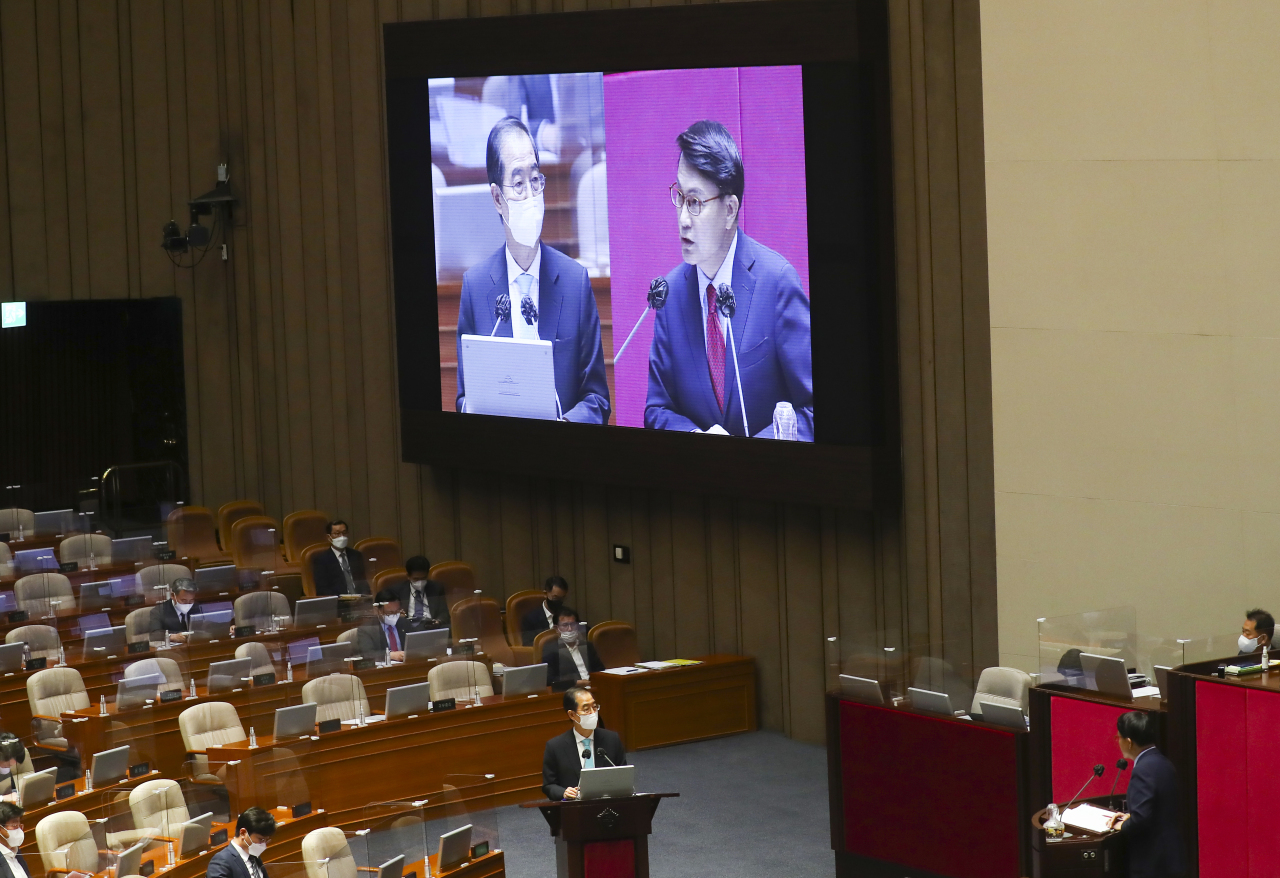 Rep. Yoon Sang-hyun ask questions to Prime Minister Han Duck-soo (left) during an interpellation session at the National Assembly on Tuesday. (Yonhap)
On the second day of the National Assembly’s interpellation session on Tuesday, Rep. Yoon Sang-hyun of the ruling People Power Party said President Yoon Suk-yeol “should have met with” US Speaker of the House Nancy Pelosi during her trip to Seoul last month.

In a question addressed to Prime Minister Han Duck-soo, the ruling party lawmaker on the parliamentary committee for national policy asked if he believes the president not meeting with the US House Speaker was “in national interest.” The presidential official at the time had explained that the decision to forgo an in-person meeting was based on a “comprehensive consideration of national interest.”

The lawmaker said the president meeting with Pelosi “would have been in the national interest of South Korea.”

He then compared the reception given to Pelosi’s Chinese counterpart, top legislator Li Zhanshu, who was in Seoul last week. Li was received by the National Assembly’s secretary general Lee Kwang-jae and held talks with President Yoon.

When Pelosi landed in Seoul last month, no South Korean official received her at the airport.

“This is very serious. This is not the kind of diplomacy we ought to be pursuing,” said Rep. Yoon, who asked if the move was “intended to appease China.” “Think about what kind of message we would be sending to the US.”

Prime Minister Han reiterated the explanation given by the presidential office at the time, stating that President Yoon was not able to see Pelosi as he was on summer vacation.

“I don’t think it’s fair to view it as appeasing China. How the meeting would take place had already been arranged in advance. As you know, the president spoke with Speaker Pelosi for about 40 minutes on the phone,” he said.

Other figures within the ruling party have issued criticisms over the president’s handling of the Pelosi visit.

Former floor leader Na Kyung-won called it “regrettable.” Rep. Ha Tae-kyung said the president “should have taken time out of vacation” for a meeting, while faulting the National Assembly’s secretary general Lee and speaker Kim Jin-pyo, both of whom are affiliated with the Democratic Party, for the reception.

At Tuesday’s interpellation session, Rep. Yoon said that the current administration, while maintaining a hawkish stance, was “failing to bring Pyongyang to the negotiating table.”

“North Korea has so far refused to engage in dialogue with President Yoon despite his offer of aid as part of the ‘audacious initiative.’ Nor has North Korea responded to the Unification Ministry’s proposal of a reunion meeting of families separated during the Korean War,” he said.

Rep. Yoon added that while North Korea remains unresponsive to calls for dialogue, the country was stepping up efforts to cement its status as a nuclear power.

“About 40 percent of the speech delivered that day was dedicated to highlighting North Korea’s refusal to denuclearize,” Rep. Yoon said.

In a question to Minister of Unification Kwon Yong-se, he asked what the Yoon administration was doing differently under the “audacious initiative.”

Kwon admitted that “no communication channel has been established” with North Korea.

“The audacious initiative differs from the approaches taken by preceding administrations in that economic incentive is not going to be the only bargaining chip in the negotiation,” the minister said.