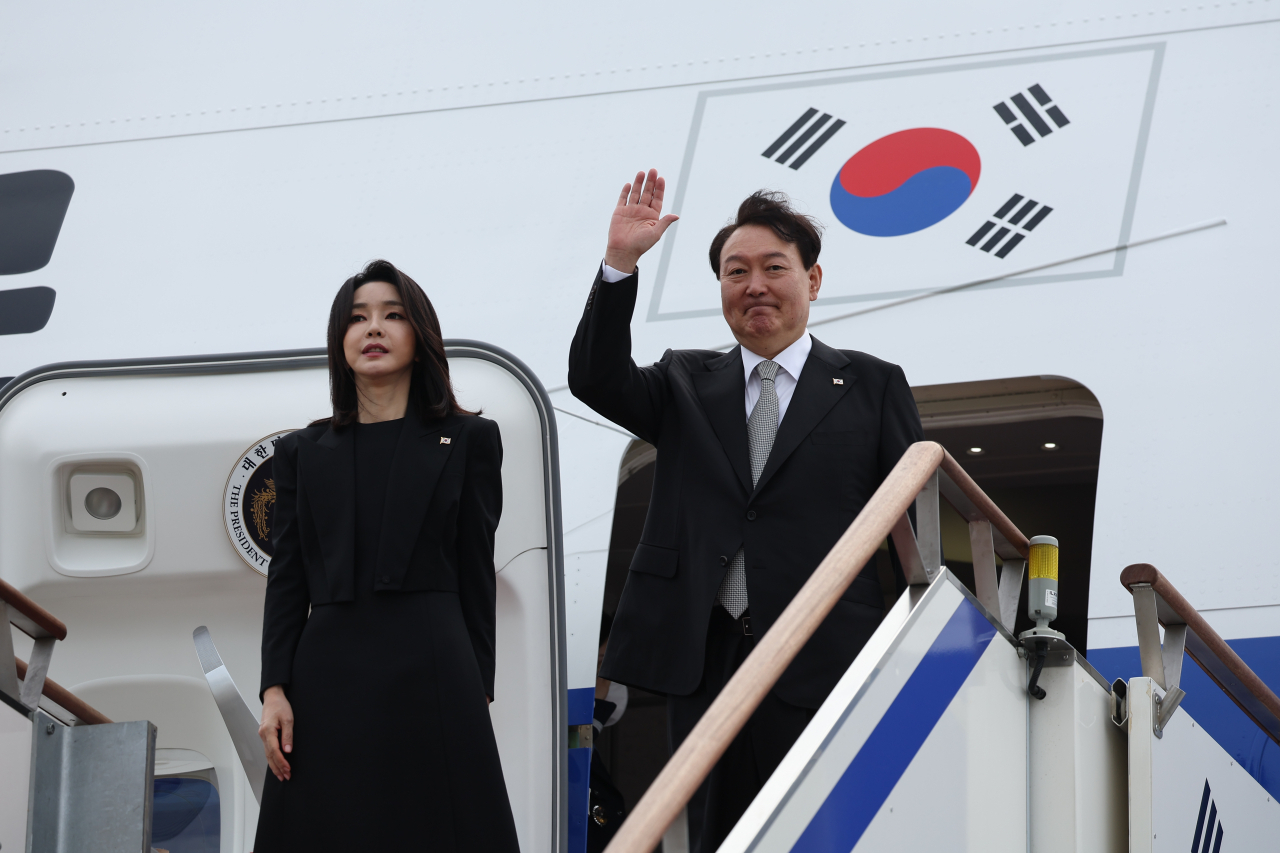 President Yoon Suk-yeol and First Lady Kim Keon-hee arrive at Seoul Airbase on Sunday for a five-night, seven-day visit to the UK, the US and Canada and greet before boarding Air Force One. (Yonhap)

President Yoon Suk-yeol is on a seven-day tour of the UK, US and Canada, where he will meet state leaders to strengthen security and economic cooperation and urge those attending the United Nations General Assembly to cooperate on the threat of North Korea.

Yoon left Seoul Air Base for the UK on Sunday morning. This is his second overseas trip following the NATO summit in June. First lady Kim Keon-hee is also accompanying him on the tour.

He will first attend Queen Elizabeth II's funeral at Westminster Abbey in London on Monday and then move to New York and deliver a keynote speech at the UN General Assembly on Tuesday.

Yoon intends to hold bilateral summits with the leaders of the US and Japan. On the last leg of his trip, Yoon will head to Ottawa for a summit on Friday.

Yoon will focus on strengthening solidarity with partner countries that share the core values ​​of liberal democracy, the presidential office said.

The Korea-US bilateral talks to be held on the sidelines of the UN General Assembly are of the greatest interest to Korean companies, which raised concerns following the recent passage of the Inflation Reduction Act and Chips and Science Act in the US.

Under the inflation act, the US government provides subsidies of up to $7,500 only for electric vehicles that use more than a certain percentage of batteries and core minerals produced in the US. Hyundai Motor, which ranked second in the US electric vehicle market with a 9 percent share in the first half of this year -- Tesla accounted for 70 percent -- is ineligible for the subsidy payments and could lose price competitiveness.

The Chips and Science Act includes a provision that companies that received US tax credits should pay them back if they build new semiconductor factories or expand facility investment in China. Samsung Electronics and SK hynix both have chip production facilities in China, so they may have to give back subsidies.

Also, US President Joe Biden recently signed an executive order for the "National Biotechnology and Bio-Manufacturing Initiative,” seeking to make all research and development and production related to biotechnology take place within the US.

The Biden administration has sought to step up measures to boost investment in the US ahead of the upcoming midterm elections in November.

However, the moves also come as the US has stressed economic security with South Korea by encouraging investment from major Korean battery and chip firms and by pushing ahead with economic alliances, including the Indo-Pacific Economic Framework and “Chip 4” alliance.

Issues related to the Inflation Reduction Act are likely to be a pressing item on the agenda when Yoon meets with Biden for bilateral talks.

A senior presidential official said on the condition of anonymity, “The US side has expressed its position to look into the IRA in detail (after the Korean side protested),” and added, “Since this issue is a very important issue for us, I think it will be raised in the bilateral talks.”

Last week, the presidential office said Yoon would also have bilateral talks with Japanese Prime Minister Fumio Kishida. The meeting would be the first Korea-Japan summit since Yoon took office. They encountered each other several times at the NATO summit in June but did not meet formally.

However, Japanese news media Sankei Shimbun reported Sunday that the Japanese government was not planning to hold an official Korea-Japan summit in the wake of the UN General Assembly, citing multiple government officials.

Sankei reported that Japan has complained to South Korea about the presidential office's announcement. It added the Japanese side is cautious about responding to the summit without making progress on the conscripted labor, and predicted that the leaders of the two countries could stand and talk for a short time at the UN General Assembly.

Another Japanese news media, Mainichi Shimbun, reported on the same day that a Korea-Japan summit was not certain to go ahead as Japan is still treading carefully.

The relationship between the two nations has remained thorny over the past years due to unresolved historical issues. The Supreme Court justice in charge of the case to decide when to start compensation for victims of Japanese forced labor recently resigned. This has indefinitely delayed the compensation procedures, which involves selling the domestic assets of Japanese companies that were complicit in the war crimes. The Japanese government opposes the process.

The Korean presidential office, in response to the Japanese reports, said there was “no change” in the agreement to hold the summit.

Yoon's keynote speech at the UN General Assembly, the highlight of the trip, is scheduled for Tuesday.

As North Korea recently rejected the "Audacious Initiative" proposed by the South Korean government and formalized the legislation of nuclear weapons, Yoon is expected to urge the international community to cooperate in facing the North Korean nuclear threat.

A senior presidential official said Yoon is likely to include in his remarks a message on building peace on the Korean Peninsula through international solidarity and jointly responding to nuclear threats from the outside.

He is unlikely to mention the Audacious Initiative, which was proposed in August but did not get a positive response from the North.

South Korea and the US agreed to respond overwhelmingly and decisively to North Korea's nuclear threats in an unprecedented manner at a meeting of the Extended Deterrence Strategy and Consultation Group in Washington on Friday, as North Korea has legislated its preemptive use of nuclear weapons and advanced its seventh nuclear test.