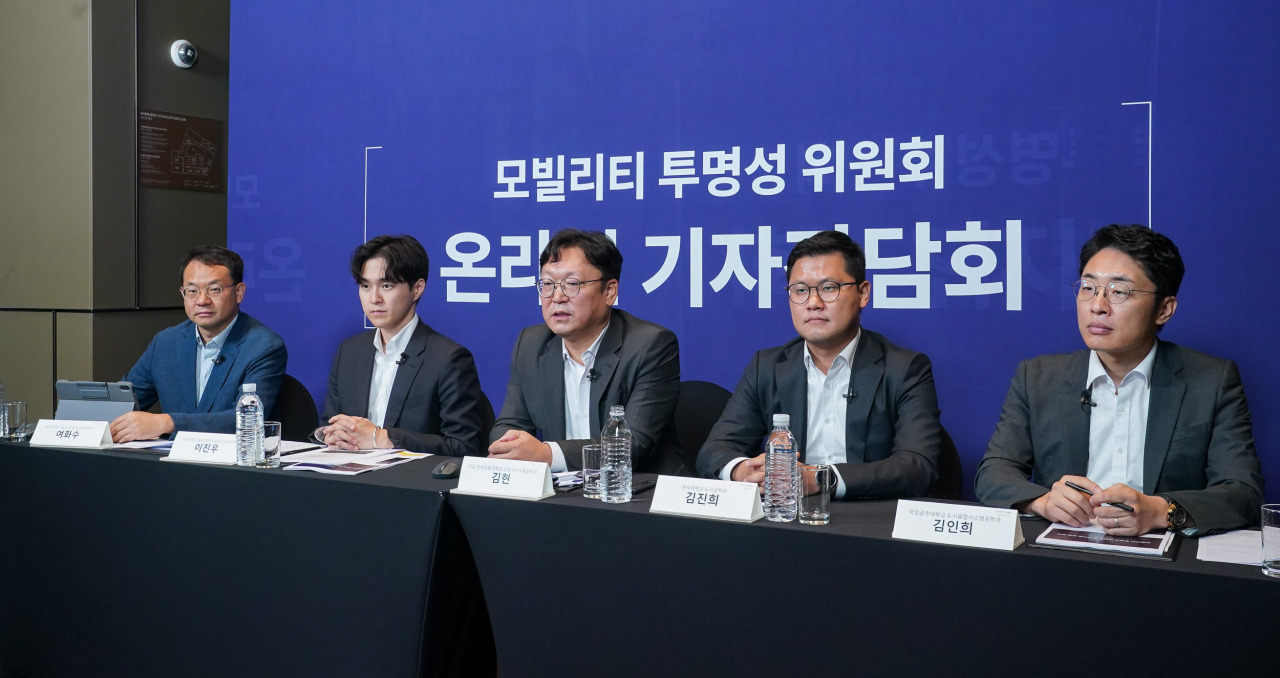 Officials from the Mobility Transparency Committee speak during an online press conference to announce the results of their review of Kakao Mobility's taxi-hailing algorithm on Tuesday. (Mobility Transparency Committee)
A committee of experts said Tuesday that the algorithm of Kakao Mobility’s taxi-hailing application -- Kakao T -- does not favor its affiliated cabs known as Kakao T Blue in the process of matching passengers with taxi drivers.

The experts’ analysis came amid the Fair Trade Commission’s ongoing case against Kakao Mobility over allegations that the ride-calling app operator intentionally assigned passengers to its affiliated cabs first.

Denying the allegations, the company disclosed its algorithm to the public in April, in an attempt to prove that its ride-calling system does not favor certain cabs.

Prior to the allegations, Kakao Mobility established the Mobility Transparency Committee in January as part of the company's efforts to strengthen social contributions. The five members of the committee were recommended by the Korea Society of Transportation.

The committee's five professionals in the fields of big data in transportation and artificial intelligence carried out a 6-month analysis of Kakao Mobility’s algorithm source codes and the data of over 1.7 billion taxi-hailing calls made on Kakao T.

"On July 29, 2022, the Mobility Transparency Committee visited Kakao Mobility office without prior notice and checked the ride-calling algorithm used on the company server," said Kim Hyun, the chair of the committee and a professor at Korea National University of Transportation, in an online press conference.

"We confirmed that the ride-calling algorithm provided to the committee (by Kakao Mobility) matches the algorithm source codes actually used on Kakao Mobility’s server.”

The committee also looked into Kakao Mobility’s operation server at random and found no traces of intentional meddling, according to Kim.

The committee said that Kakao Mobility’s ride-calling algorithm offers fair opportunities for taxi drivers to receive calls from passengers on its application regardless of whether they are Kakao-tagged or not.

The experts added that the algorithm does not have a discriminating mechanism based on the distance to the passenger’s destination. According to the committee, all cabs using Kakao T received calls as long as they were near passengers.

The committee, however, noted that the acceptance rates for calls differed between Kakao T Blue drivers and other cabs using the application due to non-Kakao drivers choosing which passengers they want to take.

Kakao T Blue drivers do not get to pick up passengers as they are automatically assigned, whereas non-Kakao cabs get the information on the destination of passengers and choose which calls they would like to accept.

The FTC is expected to rule on whether to impose sanctions against Kakao Mobility once Han Ki-jeong, FTC’s new chairperson nominee, is appointed after passing the National Assembly’s confirmation hearing.

According to the office of Rep. Kim Sang-hoon of People Power Party, over 90 percent of about 240,000 taxis across the country were found to be using Kakao T as of August last year.