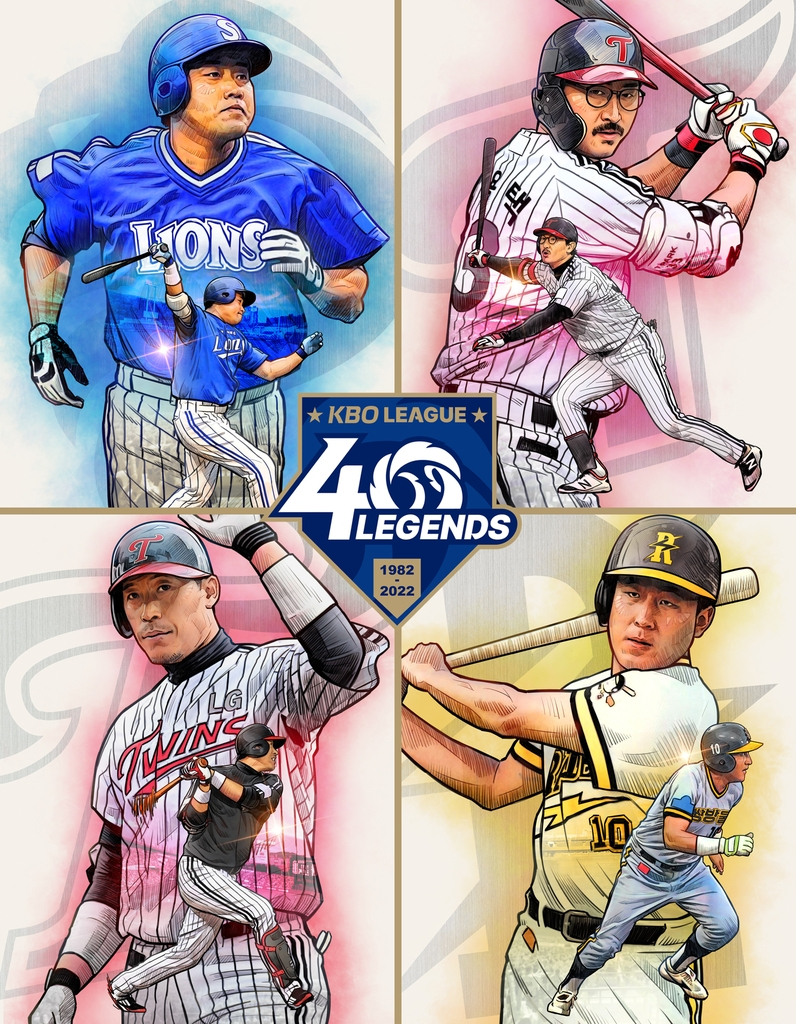 Four of South Korean baseball's greatest left-handed hitters were unveiled as the latest members of the commemorative team marking the 40th anniversary of professional baseball in the country Monday.

Yang, seventh in the voting by experts and fans, is among the career leaders in several major offensive categories. In 2007, the Samsung Lions icon became the first KBO player to reach the 2,000-hit mark and is No. 2 all time with 2,318 hits.

He set the league on fire as a rookie in 1993, leading the KBO in batting average, on-base percentage and slugging percentage while finishing second in home runs. The 1993 Rookie of the Year went on to collect at least 100 hits in 16 consecutive seasons, a record that still stands.

When Yang retired in 2010, the eight-time Golden Glove winner and four-time batting champion owned all-time records in nine categories. He has said he is especially proud of his 1,278 walks, and no active player is even within 200 of that mark.

Yang remained the hits leader until June 2018, when former LG Twins star Park Yong-taik surpassed the record once thought unbreakable. Park, who retired in 2020 with 2,504 hits, finished 15th in the voting for the anniversary team.

Park batted at least .300 in 10 straight seasons, and his lone batting title in 2009 started that stretch. The versatile player is the only one in league history with at least 200 career home runs and 300 steals.

Park spent his entire 19-year career with the Twins. Another ex-Twins star, Lee Byung-kyu, made the anniversary team at No. 19.

Lee had a memorable rookie season in 1997, playing in all 126 games while snatching both the Rookie of the Year award and a Golden Glove as an outfielder. The hitting machine led the KBO in hits four times and won two batting titles over his 19-year career. The latter of those two titles came in 2013, when he was 38, making Park the oldest batting champion in league history.

Checking in at No. 22 in the anniversary team voting is Kim Ki-tai, who became the first left-handed hitter in the KBO to win the home run crown in 1994. Three years later, Kim led the league in batting average (.344), on-base percentage (.460) and slugging percentage (.636).

In 1991, Kim became the first KBO rookie to smack more than 20 homers, when he finished with 27, along with 92 RBIs, for the now-defunct Ssangbangwool Raiders.

Kim also served as captain for three different clubs over his 15-year career: the Raiders, the Lions and the SK Wyverns. (Yonhap)