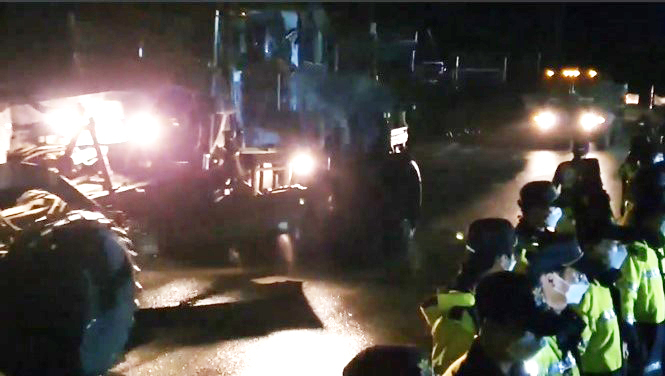 Construction equipment is delivered to a THAAD base in Seongju, 220 kilometers south of Seoul, in this photo taken on Sept, 4, 2022, and provided by a civic group opposing the installation of the U.S. anti-missile defense system. (Yonhap)
South Korea has begun the process of providing full-time, unfettered overland access to a military base that hosts the US-made Terminal High Altitude Area Defense anti-ballistic missile system in earnest as of Sunday.

The move is part of the South Korean president’s pledge to “normalize” the operation of the THAAD base in Soseong-ri, Seongju County, North Gyeongsang Province, by the end of August.

Around 10 vehicles carrying construction equipment, an oil tank and military personnel headed to the THAAD site at around 1:30 a.m. local time on Sunday without prior notice, a group of anti-THAAD protesters said, providing video footage.

The transportation at dawn is the Yoon Suk-yeol government’s action to start implementing its plan to guarantee unfettered and full-time overland access to the THAAD site seven days a week, The Korea Herald learned on Sunday.

But the Yoon government is expected to ensure the United States Forces Korea has access to the THAAD site at their convenience for the present rather than providing full-time, unrestricted access, mainly in light of residents’ resistance.

A large-scale rally was held on Saturday at the entrance of the military base for the existing THAAD battery to oppose the Yoon government’s plan to expeditiously make the THAAD system fully operational.

Construction materials for refurbishing barracks, daily necessities and military personnel had been brought to the THAAD site by overland routes two to three times a week under the Moon Jae-in government. But the frequency of transporting supplies was increased to five times a week from this June after the Yoon government took office.

Why it matters
The existing THAAD missile defense battery has been temporarily deployed on the now-shuttered Lotte Skyhill golf course in Soseong-ri, and has been running in emergency mode since 2017. South Korean and US military personnel have been living in shipping containers and the old golf clubhouse.

The operation of the THAAD system has been long hindered by harsh backlash from local residents and the limited overland access to the military base as a result.

USFK commander Gen. Paul LaCamera in May openly complained that limited access to the THAAD site has had adverse impacts on its military readiness, living conditions for American service members and the alliance’s combined defense posture.

LaCamera underscored that unfettered access was “required to fully ensure logistical support at the site, and improve the quality of life for Service members stationed there” in a written statement presented to the House Appropriations Subcommittee on Defense.

The USFK commander added that limited access also slowed down construction projects which are “critical for maintaining the system’s capabilities, crew training, and upgrades.”

Against this backdrop, the Yoon government has repeatedly pledged to grant the USFK full-time, unrestricted access and ensure full-capacity operations of the existing THAAD battery.

How far has Yoon come?
The Yoon government has recently taken a critical step last month to that end.

A government-civilian consultative body was composed last month after the process had been delayed for years due to the lack of cooperation from local residents. South Korea’s Environmental Impact Assessment Act stipulates that the council should include at least one local resident representative.

Forming the consultative body should precede the full-scale environmental impact assessment of the THAAD deployment, which is legally required to repair and refurbish the THAAD base to ensure its full capacity.

The first meeting was held on Aug. 19 and reviewed evaluation criteria and methods, the Defense Ministry’s acting spokesperson, Moon Hong-sik, said at a regular press briefing on Sept. 1.

The full-scale environmental assessment generally takes more than one year, but the Yoon government seeks to complete it by next March, a military source recently confirmed to The Korea Herald.

South Korea and the US have also been in consultation over the process to transfer the remaining land within the THAAD base to the USFK by this month in a bid to bring the military base into normal operation, another South Korean military source confirmed to the media in August.

In 2017, South Korea granted around 320,000 square meters of Lotte Skyhill golf course to the USFK.

China’s backlash
But The Yoon government’s multifaceted efforts to ensure the THAAD battery’s full-capacity operations at full tilt will likely further deepen the rift between South Korea and China.

China’s Foreign Ministry in August said the US deployment of the THAAD anti-missile system in South Korea “clearly undermines China’s strategic security interest,” claiming that the Moon Jae-in government had pledged to limit the operation of the existing THAAD battery.

The Yoon government has reiterated that THAAD is a means of self-defense to protect people’s lives and safety from North Korea’s nuclear and missile threats and it is a matter of “security sovereignty” that can never be subject to negotiation.

Defense Minister Lee Jong-sup admitted that South Korea’s relations with China has made it tougher for the Yoon government to ensure the full operational status of the deployed THAAD battery during a parliamentary briefing on Aug. 29. At the same time, Lee underscored the legitimacy of the THAAD’s deployment.

“North Korea’s nuclear and missile threats are the fundamental reason for the deployment of the THAAD battery,” Lee told lawmakers. “There is no need for THAAD to be placed here should the threats disappear.”