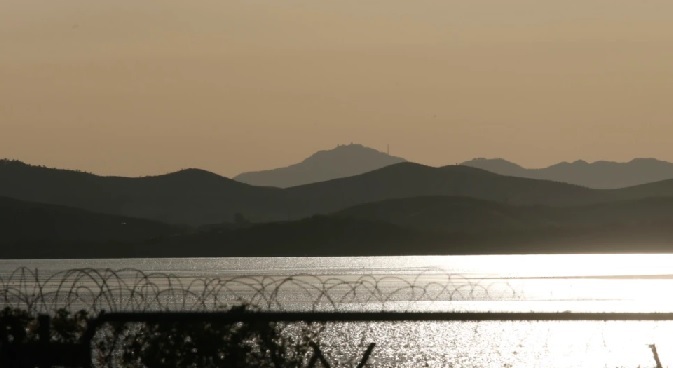 The Imjin River in Paju, northwest of Seoul. (Yonhap)
Last week, another corpse thought to be of a North Korean was recovered from the South Korean side of the Imjin River, which flows from North Korea and crosses the border. The deceased, a woman, was wearing a badge with portraits of the North’s two former leaders Kim Il-sung and Kim Jong-il, according to local police investigators.

It was the fourth time in July that a body suspected to be of a North Korean was found washed up in the South.

The three other bodies wore no badge to indicate their origin. But their thin bodies, worn-out clothes missing fabric labels and the absence of marks from vaccination shots support the theory that they are North Koreans.

The first of the four, found on July 2 was a child, thought to be aged between 3 and 7 years old, washed ashore on the island of Ganghwado, off the coast of Incheon. The child was wearing only a long-sleeved top.

Just three days later, another child -- a boy wearing only shorts -- was recovered in an estuary of the Han River in Gimpo, Gyeonggi Province, just south of the Military Demarcation Line. On July 16, a 9-month-old baby was found naked and dead near the Unification Bridge over the Imjin River in Paju, northwest of Seoul.

The clothes that were found did not have fabric labels, which are required for all clothing products sold here. For the younger one without clothing, police found no trace of vaccination shots. All infants born in South Korea are required to get vaccine shots in accordance with the government-set immunization schedule for children. For instance, a typical baby 3-month-old would have received shots for hepatitis and tuberculosis.

While police investigations are underway to establish the deceased’s identity, some North Korean defectors told The Korea Herald that they were probably victims of flooding in the North.

According to the North’s state-run Korean Central Broadcasting Station, the western provinces of South and North Hwanghae and the city of Kaesong near the inter-Korean border had been hit with more than 300 millimeters of rainfall from June 27-30. 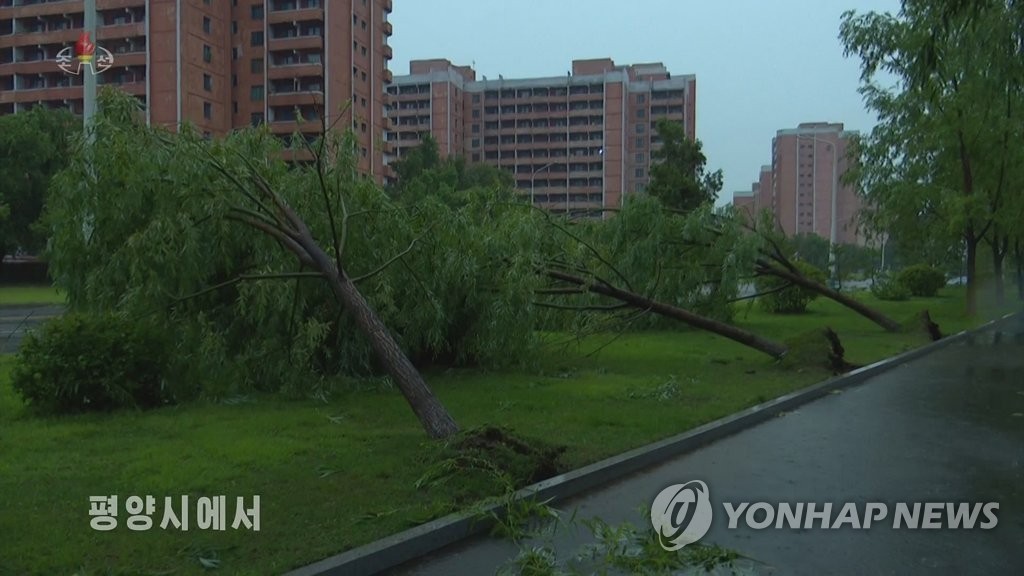 Trees are uprooted by heavy rain and strong winds in North Korea‘s capital city of Pyongyang, in this footage captured from the Korean Central Television on June 26. (Yonhap)
Choi also raised the possibility of landslides as well.

“Mountains in North Korea are mostly bare and rocky. As you know, trees, with their roots, hold soil in place and fight erosion. Heavy rain often causes huge losses of both life and property in the country largely due to the problem of deforestation,” he said.

Formerly a member of the North’s Communist Party, Choi defected to the South in 2008.

If they are North Korean, what happens next?

If the dead body of a North Korean is found in the South, the Seoul government should report it to the North and discuss its repatriation, under an agreement on the disposal of North Korean bodies which came into effect in 2000.

Of the four cases in July, only the woman wearing the North Korean badge is likely to be reported, local reports said.

At the same time, the Seoul authorities are obliged to check whether the deceased have any relatives here.

This, however, looks unlikely to happen, according to defector-turned-lawyer Lee Young-hyun.

“North Korea wouldn’t want to reveal their safety loopholes to the world by taking the dead bodies of their residents. The North Korean authorities always promote their image to foreign countries as a stable regime,” he said. He passed the national bar exam in 2019, becoming the first defector to do so.

As for the three children, despite them appearing to be North Korean, their bodies are likely to go through the South Korean process of handling unclaimed bodies.

Meanwhile, it is not a rarity that bodies of North Koreans wash up in the South.

In the summer of 2007, Seoul authorities discovered a total of 11 bodies after heavy rains in the North. At that time the North agreed to have them repatriated.

In July 2017, when Seoul asked Pyongyang about a body of a woman in her 40s washed ashore on Yeonpyeong Island near the border, but the regime had refused to take it over.