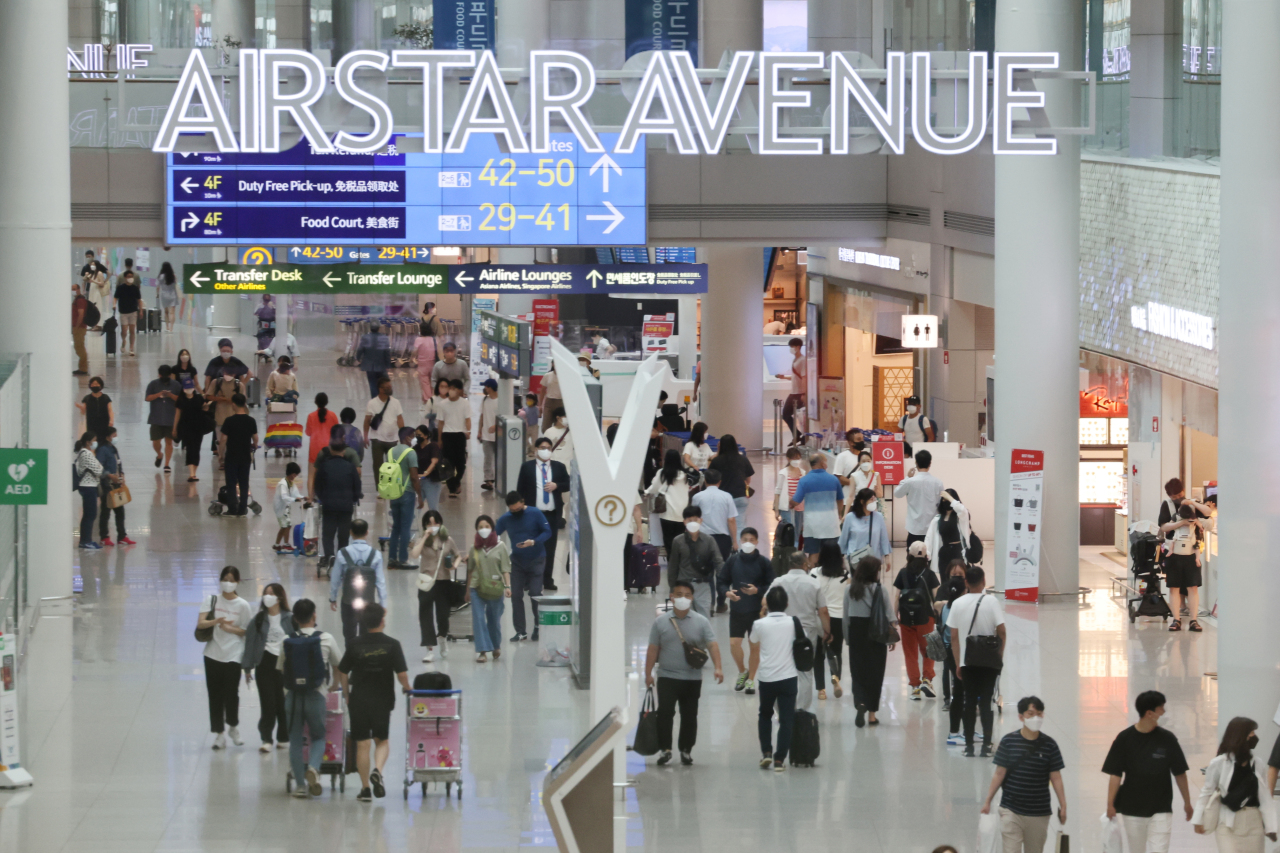 Incheon Airport (Yonhap)
The number of overseas travelers spiked to over 3.93 million in the first half of this year, surging 233.2 percent on-year, fueled by fully lifted aviation restrictions and antivirus regulations, according to Incheon Airport on Thursday.

"The increase was most noticeable in May and June when the number of overseas travelers increased 44.6 percent and 34.4 percent on-month respectively. Most popular destinations were the US, Southeast Asia, and Europe,” said Kim Chang-kyu, public relations executive director of Incheon International Airport Corporation.

The Transport Ministry fully lifted aviation restrictions -- including a curfew on flights landing at Incheon Airport – as of June 8, more than two years after the enforcement of the antivirus regulations.

Since June 15, all inbound air travelers were exempt from quarantine regardless of their vaccination status, as part of the government’s post-omicron response plan announced in April.

Incheon Airport expects the number of overseas travelers to hit 24 million this year—a 35 percent restoration of the pre-pandemic figure.

The airport is also preparing to normalize its operations to its pre-pandemic level by up to 70 percent by the summer peak season, which is between July 22 to August 10.

That involves operating up to 6 departure gates, 490 check-in counters, and 8 arrival gates for over 60,000 international travelers a day.

Incheon Airport forecasts a daily average of 85,621 travelers during that period, which is a hike of 747 percent on-year.

To respond to increasing travelers at the airport, Incheon Airport will also restore airport limousine bus operations to pre-pandemic levels by up to 60 percent.

"But travel restrictions to China and Japan could hold back travelers and delay travel demand restoration back to the pre-pandemic level, since back in 2019, travels to China accounted for 19.1 percent of the total number of overseas travelers and to Japan 16.7 percent,” explained Kim.

Flights to China are currently heavily restricted due to Beijing’s rigorous quarantine measures. Despite the reopening of air routes between Korea and Japan, Japan does not offer visa-free entry to Korea.