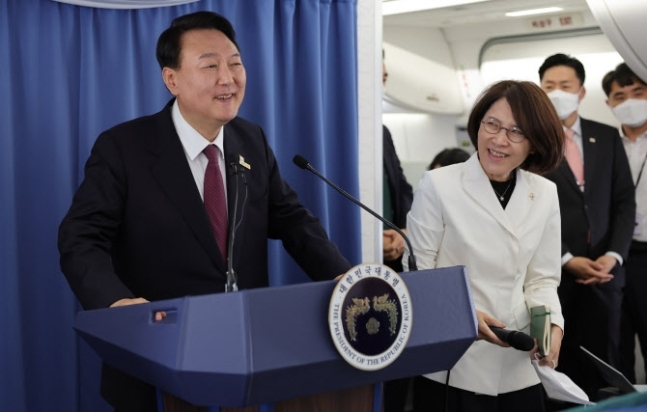 President Yoon Suk-yeol talk to reporters during the flight en route to Seoul at around 1 a.m. on Friday. (Yonhap)

President Yoon Suk-yeol said his participation in the trilateral summit with the US and Japan, and the NATO summit did not aim to "exclude China" but added universal norms and values should be respected and protected.

Holding a press briefing on the plane en route to Seoul from Madrid on Friday, Yoon delivered his thoughts on his first trip and meetings with NATO allies and partners.

“We have been partners with NATO since 2006 and Korea has cooperated with NATO in Afghanistan and other such cases, but this is the first time a Korean president has participated in a NATO summit,” he said.

He described the trip as a “useful opportunity” to talk with world leaders, particularly the trilateral summit with the US and Japan.

When asked how he would address relations with China, which expressed dissatisfaction with Korea’s participation in the NATO summit, he said Korea's involvement was not aimed at “excluding a specific country.”

“We should deal with issues whether international or local with the spirit that universal norms and value should be followed,” he added.

“Even if we criticize a person and if we do something else when they violate rules and values, it's just an action to identify, declare, and protect the values that our society pursues together and not to exclude the person from the society,” he said, adding that the same rules are applied to the international society.

Yoon added for the international community to develop sustainably, it must “abide by these common values and norms,” and the order based on those norms must be respected.

But he avoided pointing the finger at China, saying, “There is no need to mention a specific country.”

“No matter what country it is, when they act against the values and norms that the world must uphold together, we condemn them together and impose sanctions together, and if that country accepts them, we work together for world peace and prosperity,” he said.

Throughout the summit, Yoon was “able to confirm” that the leaders of the participating countries were steadfast in their stance on the North Korean nuclear issue and strict management of tension on the Korean Peninsula.

“The main topics mentioned by the leaders at the NATO summit were about the Ukraine crisis and North Korea's nuclear weapons,” he said.

“It seems to be the first time in about five years that the leaders of the three countries, South Korea, the US and Japan, discussed how to respond to the North Korean nuclear program together.”

The three leaders agreed that it would be “desirable” for military security cooperation, which had been suspended for a long time to respond to North Korea's nuclear weapons program to be “resumed,” he said.

Yoon believes more details will be advanced by the ensuing discussions between foreign ministers, defense ministers and security officials.

Improving relations with Japan is possible

When asked how he will solve tensions with Japan, Yoon said, “As I told the public during the election campaign, I have emphasized that the issues of the past and the future of the two countries must be solved together on the same table.”

“The idea that we cannot discuss pending and future issues without progress over past issues should be avoided.”

He said he believes that if both sides can discuss issues and cooperate for the future, the past issues will be fully solved.

Yoon and Japanese Prime Minister Fumio Kishida met several times at the NATO summit through a gala dinner, a four-way summit with Australia and New Zealand, and a trilateral summit with the US. Whenever they met, the atmosphere was cordial although they avoided sensitive topics.

Alongside boosting security ties with the Western allies and partners at the NATO summit, he sought to use the opportunity to increase economic cooperation through a number of bilateral meetings on the sidelines, with Czech Republic, Canada, Spain, France, UK, Romania and France.

There was considerable interest among European countries in new nuclear power plants, as countries come under pressure to achieve energy security amid the Ukraine crisis and the carbon neutrality by 2050, Yoon said.

“And as you all know, Korea's nuclear power plant construction capacity is by far the best in the world,” he said.

“We prepared a lot of brochures about our independently developed APR1400 model and introduced them to the leaders while explaining them,” Yoon said. “They showed a lot of interest.”

He told them Korean companies could complete nuclear power plant construction “at the cheapest, safest and fastest time” in the world.

“And there were many countries that were interested in defense,” Yoon said.

Especially because of the Ukraine crisis, there were many countries that wanted to strengthen their national defense provisions and develop defense industry technology, he added.

“We've been adopting a trade-off approach in which we export defense equipment and then later transfer technologies at the right time,” he said. But he added that there were now a lot of countries that want to do research and development with us from the beginning and to share the resulting technologies.