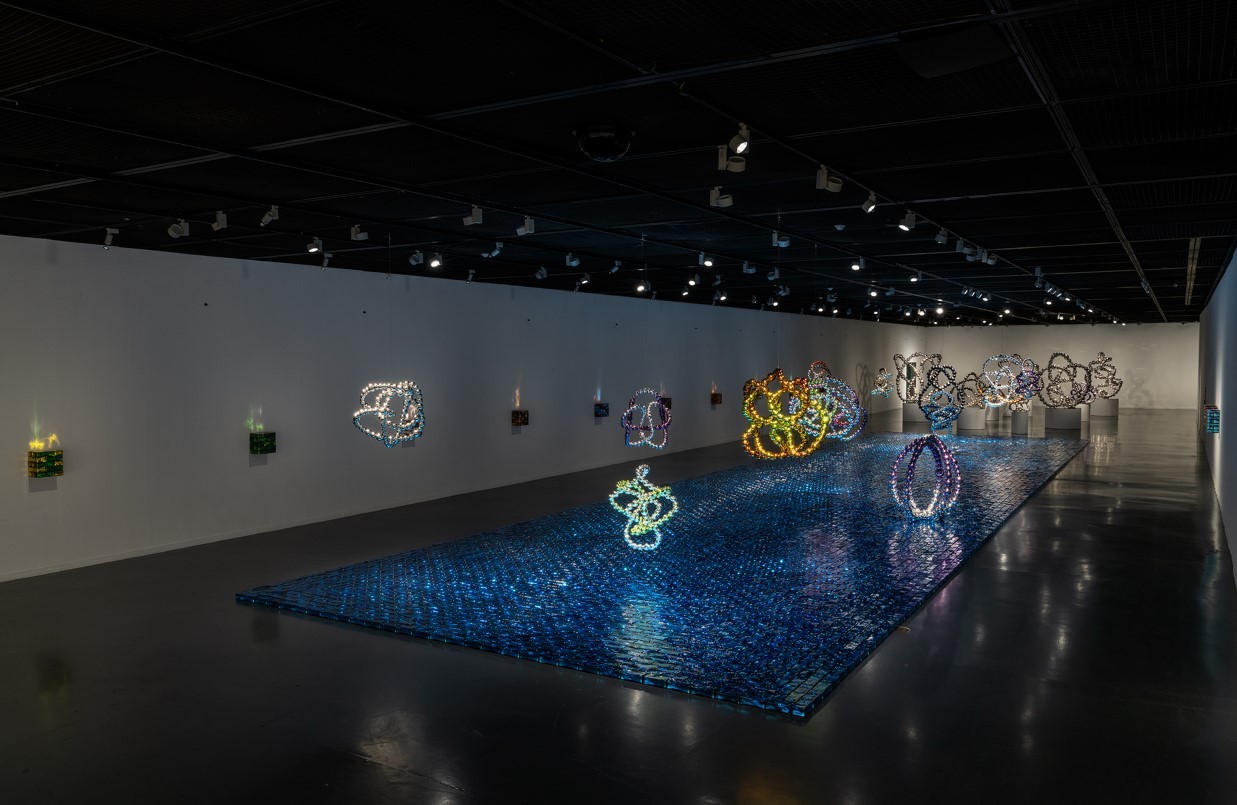 An installation view of “Riviere Bleue (Blue River)” and the “Knot” series by Jean-Michel Othoniel at Seoul Museum of Art (CJY Art Studio)
A shimmering blue river runs along the floor of the museum and droplets in the form of knots float above the stream. The combination of works by French artist Jean-Michel Othoniel is overwhelming, stimulating the visual senses.

The tranquil blue river, measuring 26 meters long and 7 meters wide, consists of bricks of blue glasses created in collaboration with glassblowers in Firozabad, a famous glassblowing center in India. The blue color, referred to as “Firozi” blue, embraces multiple references to Mediterranean culture and to the cradle of Indo-European civilization.

The exhibition “Jean-Michel Othoniel: Treasure Garden” at Seoul Museum of Art is the largest show of the artist, known as master of glass, since the 2011 retrospective at the Center Pompidou. The Seoul show features some 70 pieces from the past decade.

The knots series -- which hang above “Riviere Bleue (Blue River)” -- are made of stainless steel and mirrored glass, which the artist started to explore in 2009 and developed further with the Mexican mathematician Aubin Arroyo. Standing near the knots, the glass beads reflect the viewer as well as casting reflections onto each other, evoking a sense of infinity.

“I had a culture shock in India when I learned the glassblowing technique has a 2,000-year history,” Othoniel said during a press preview on Wednesday.

On the wall are blocks of bricks in two different color combinations -- blue and yellow or blue and red. Each installation looks like a beacon -- the bricks reflect the light coming from the ceiling, creating a shadow that looks like a flare. 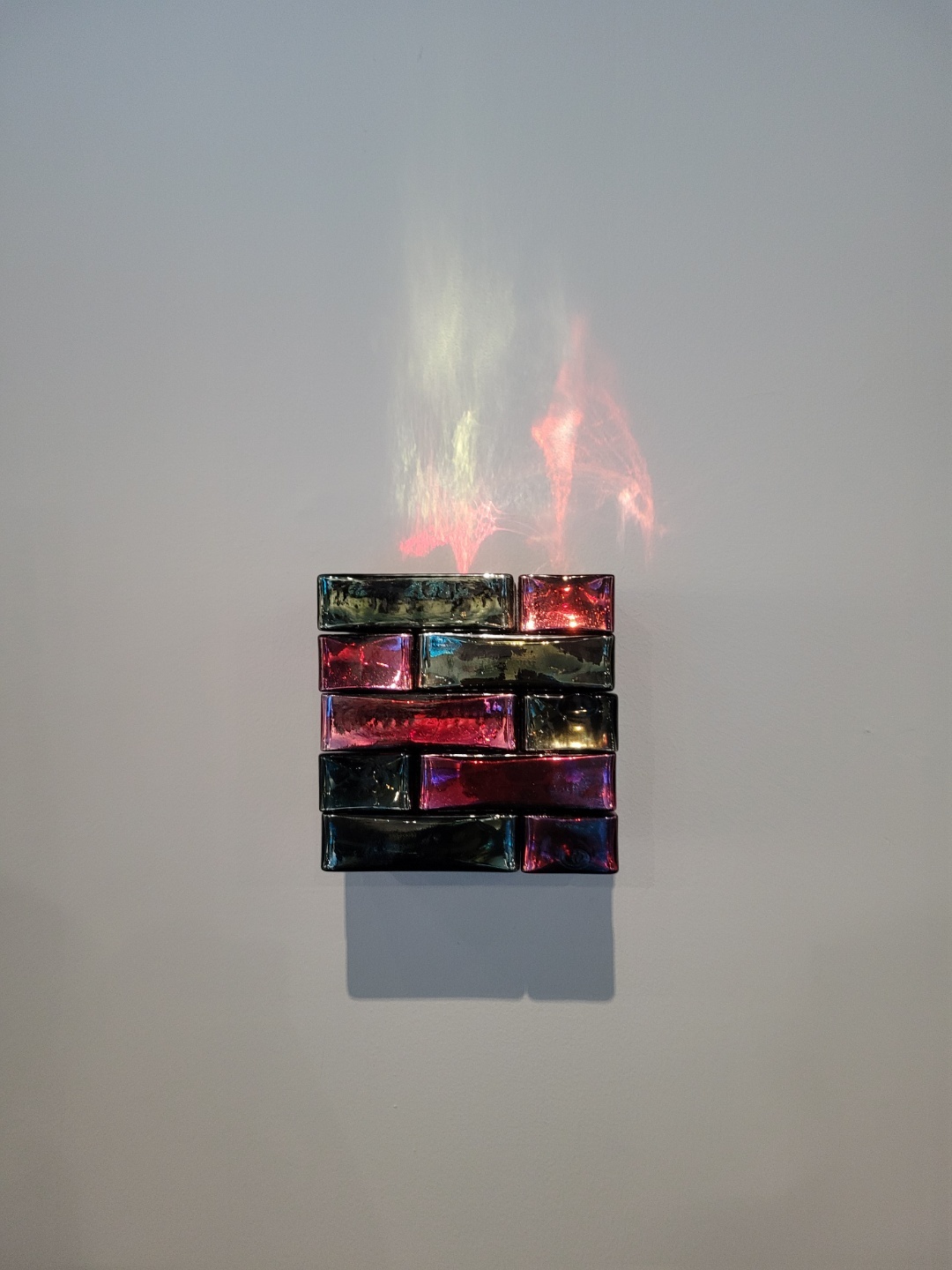 “Precious Stonewall,” by Jean-Michel Othoniel, at Seoul Museum of Art (Park Yuna/The Korea Herald)
The two-colored bricks, titled “Precious Stonewall” is the result of the artist’s desperate perseverance to stay an artist. Othoniel did a series of drawings like daily journal entries during the pandemic lockdown in France. The brick sculptures are based on the drawings.

“Nobody knew when the pandemic would end. I wanted to find energy and rhythm for creativity in the middle of hopeless times,” he said. “I did the drawing like a daily journal. I was able to regain the power to keep creating art.”

The exhibition extends to Deoksugung Palace, located across from the museum. A small pond in the corner of the palace is decorated with Othoniel’s “Gold Lotus,” golden sculptures of lotus flowers. The fact that the lotus blooms in mud attracted the artist to the flower. 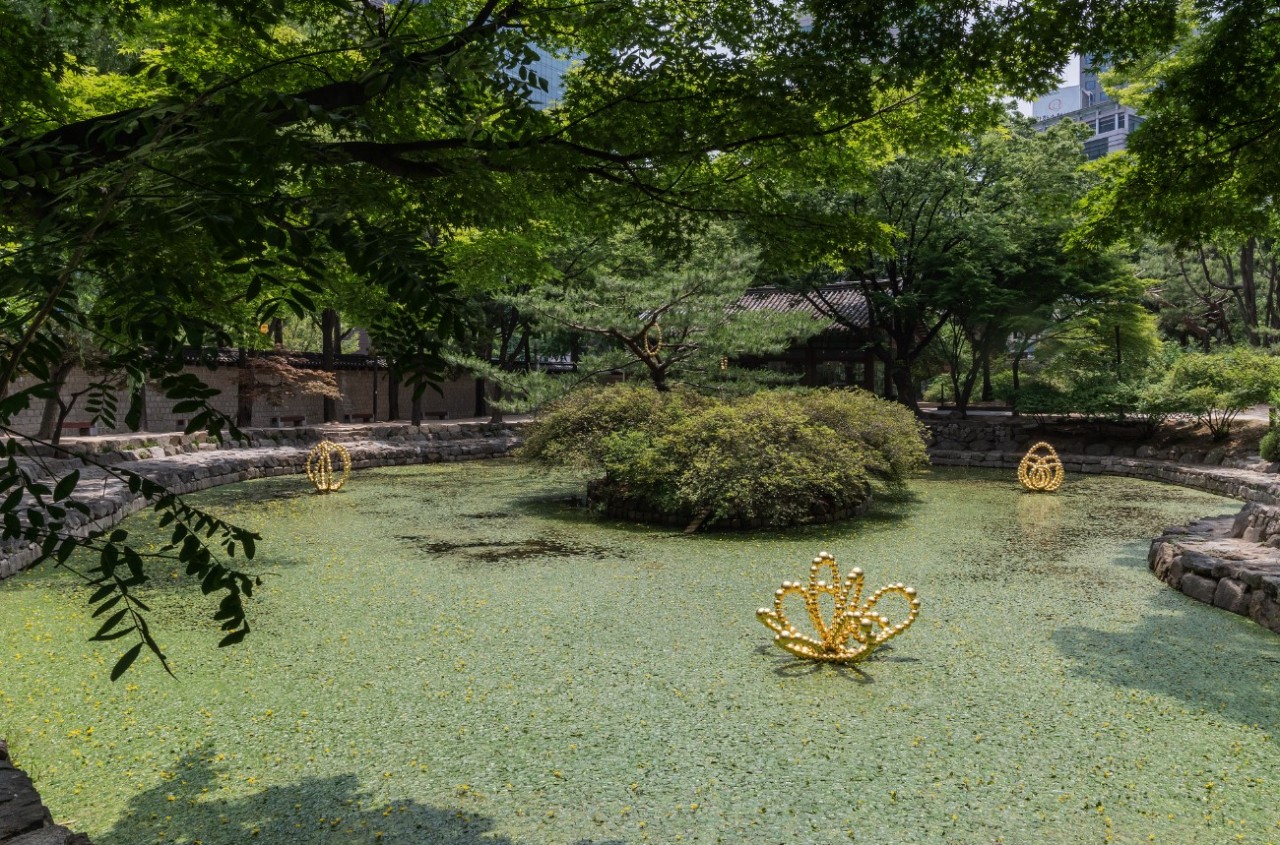 When he visited South Korea 10 years ago and took a look around the palace, he had no idea that he would one day have an exhibition here at the palace, showcasing his works at the pond. He described this as a miracle. The golden sculptures look different, depending on the weather. When it rains, it may have a more meditative vibe while it could look splendid in sunny weather.

“The garden is so beautiful. It is inspiring, peaceful and meditative,” he said.

Golden necklaces, “Collier Or,” hang from trees at the center of the pond, reminiscent of a wish tree on which people hang written wishes.

For the exhibition in Seoul, Othoniel is showing “Plum Blossom,” inspired by the flower pattern used in the palace buildings. It is painted in two colors -- red to express the flower’s petals and yellow to signify the pollen. It delivers a message of vitality, resistance and perseverance and resurrection symbolized by the plum blossom. 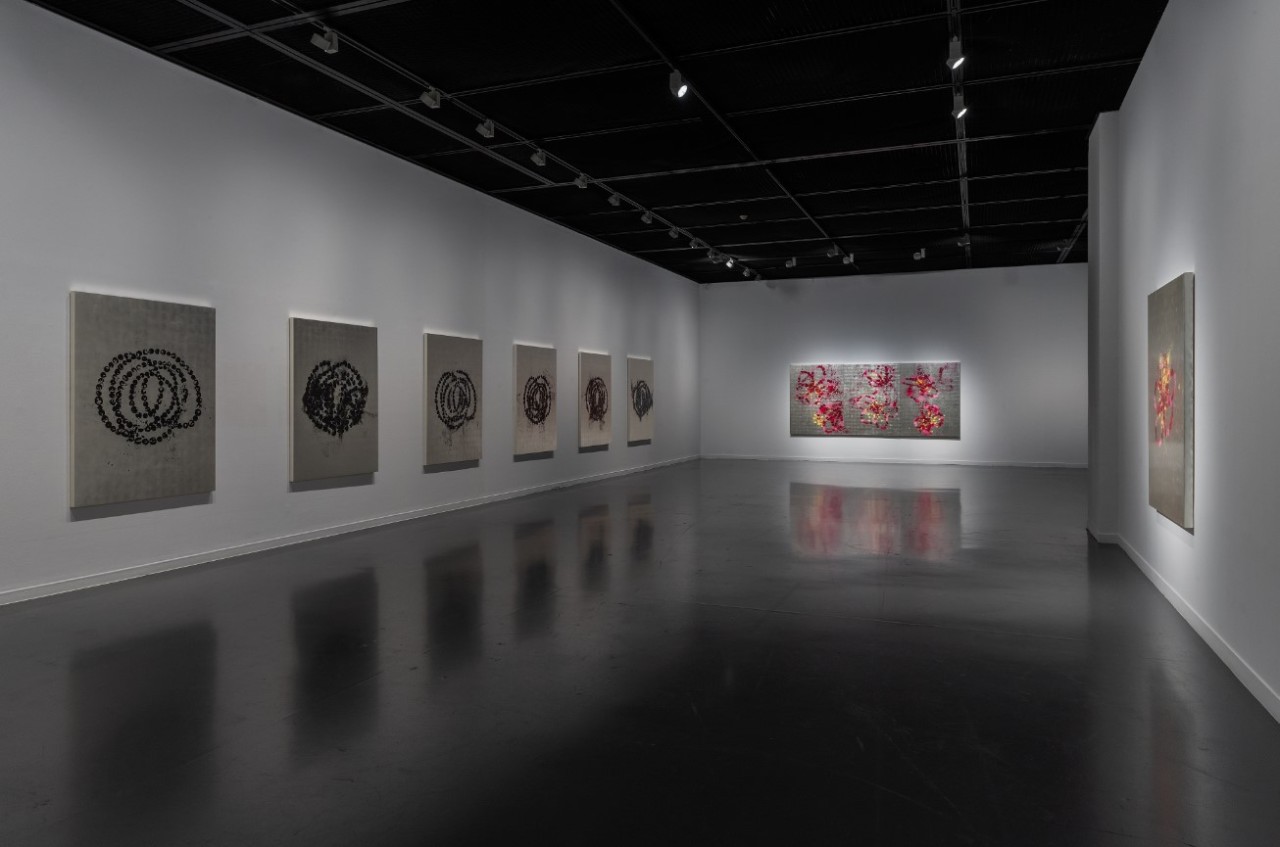 The artist’s last exhibition in Seoul was “New Works” at Kukje Gallery held in December 2020.

The exhibition at Seoul Museum of Art runs through Aug. 7. The museum is closed on Mondays.