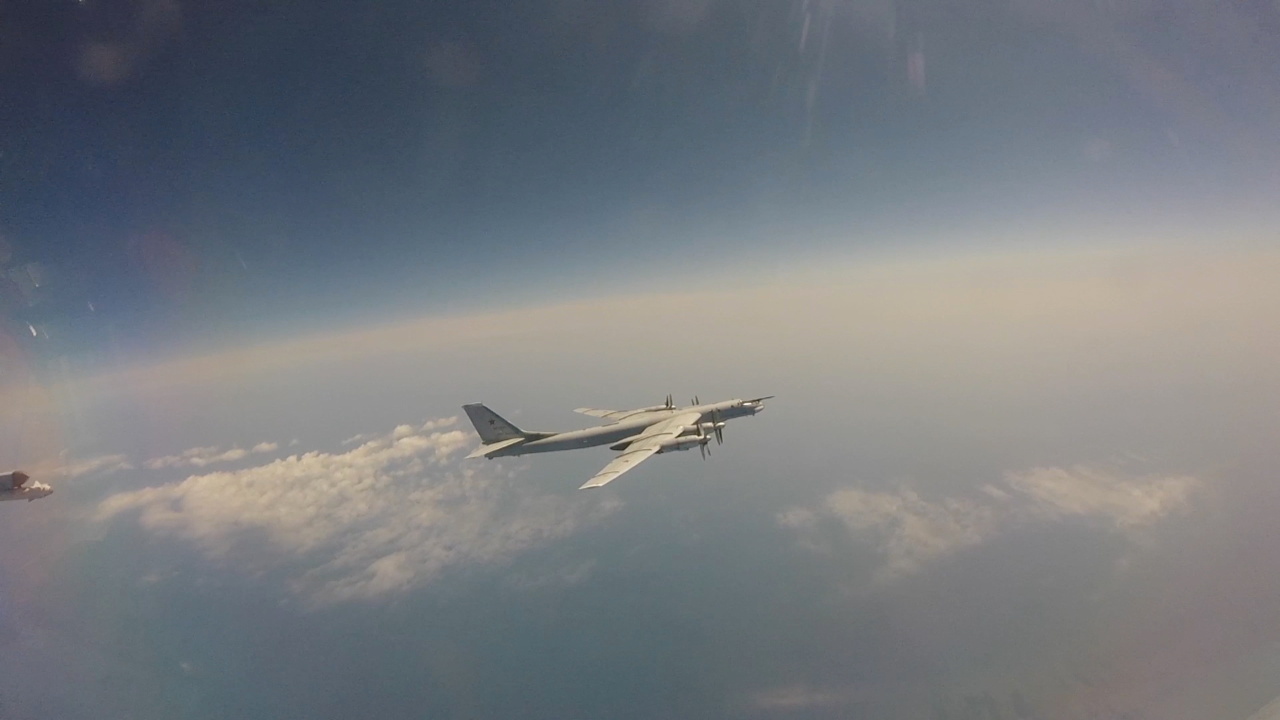 A Russian fighter jet escorts a group of Russian and Chinese aircraft on Tuesday in a joint patrol mission carried out over the East Sea and the East China Sea, in this photo taken from the video created by the Russian Defense Ministry. (Yonhap)
South Korea’s Foreign Ministry conveyed regrets to the Chinese and Russian governments via diplomatic channels after the two countries deployed multiple warplanes into Korea’s air defense zone without prior notice, and warned against a recurrence, the ministry said Wednesday.

Early Tuesday, two Chinese and four Russian fighter jets entered the Korea Air Defense Identification Zone without notice to the Korean government, an apparent show of protest as US President Joe Biden wrapped up his travels to Seoul and Tokyo to bolster regional alliance.

According to Korea’s Joint Chiefs of Staff, two Chinese H-6 bombers first entered the KADIZ from an area 126 kilometers northwest of Ieodo, a submerged rock near Jeju Island at 7:56 a.m. on Tuesday.

The Chinese bombers stayed there until 9:33 a.m., and then exited the zone to reenter from the north of KADIZ, joined by four Russian fighter jets, including two TU-95 bombers, at 9:58 a.m. In the second entrance, the fighter jets stayed for 17 minutes.

At around 3:40 p.m., the six jets were spotted heading for KADIZ in an area some 267 km of Ieodo, and South Korea deployed fighter jets before the Chinese and Russian fighters’ entered the air defense zone.

Japan also scrambled to deploy its jets and expressed “grave concerns” to Russia and China, viewing it as a provocation against the country and the region.

While both Russia and China denied any violation, saying they were conducting a joint air patrolling mission, the unexpected deployment is seen as a provocative move, occurring during US President Joe Biden’s first trip to Seoul and Tokyo.

“The purpose of Biden’s visit to Seoul is obviously to keep China and North Korea in check, and China would not just sit idle and watch,” Yang Moo-jin, a professor at the University of North Korean Studies told The Korea Herald, explaining that the aircraft deployment in the KADIZ was meant as a show of force.

As the US is ramping up efforts to bolster its presence in the Indo-Pacific region to block China’s expansion of power, Yang said “new Cold War” battle lines are being drawn in the region -- the US with its allies South Korea and Japan, against China, with Russia and North Korea.

“(From deploying its warplanes) China is also sending the message that it is ready to take actions when the US and its allies impose any kind of pressure against its allies, as the US and Korea agreed to closely cooperate to deter North Korea’s nuclear threats,” Yang added.

In a rare move, China released a video of Tuesday’s joint air training, made by the Russian Defense Ministry, on a social media account for its military TV channel that is operated by state-owned broadcaster China Central Television.

As the military provocations from China, Russia and North Korea coincided, South Korea’s presidential office said they are likely to have similar reasons for their respective actions.

“We assume China and Russia prepared (and carried out the aircraft exercise) as a series of diplomatic events were wrapping up, including the Korea-US summit, Quad summit and the launch of the IPEF, to deliver their political, diplomatic and military message to the international society,” Kim Tae-hyo, first deputy director of the National Security Office, told reporters on Tuesday.

“We are not sure whether the three countries (China, Russia and North Korea) worked together (to carry out the provocations at similar timings) but we assume they have similar intentions.

The “Quad” is the US-led security grouping, known officially as the Quadrilateral Security Dialogue, which includes India, Japan and Australia. IPEF is the Indo-Pacific Economic Framework, a newly-launched US-led economic initiative. Both regional groupings are widely viewed as a means for the US to strengthen its presence in the Indo-Pacific region to keep China in check.

Over the course of his first trip to Asia from Friday to Tuesday, Biden forged several regional initiatives intended to contain China’s clout.

After arriving in Seoul on Friday, Biden held his first summit with South Korea’s new President Yoon Suk-yeol on Saturday, where they vowed for stronger cooperation and partnership on the economy and security fronts. Biden stressed the importance of strong alliance, as “the competition between democracies and autocracies are growing,” implicitly targeting China, Russia and North Korea.

In Tokyo, Biden launched IPEF, his economic initiative to build partnerships in the region and largely intended to contain China. South Korea also joined the IPEF as an initial member along with 12 other countries, including Japan and the US.

During the Quad leader’s summit, Biden also said he would be willing to use force to defend the democratic island of Taiwan, which angered China.