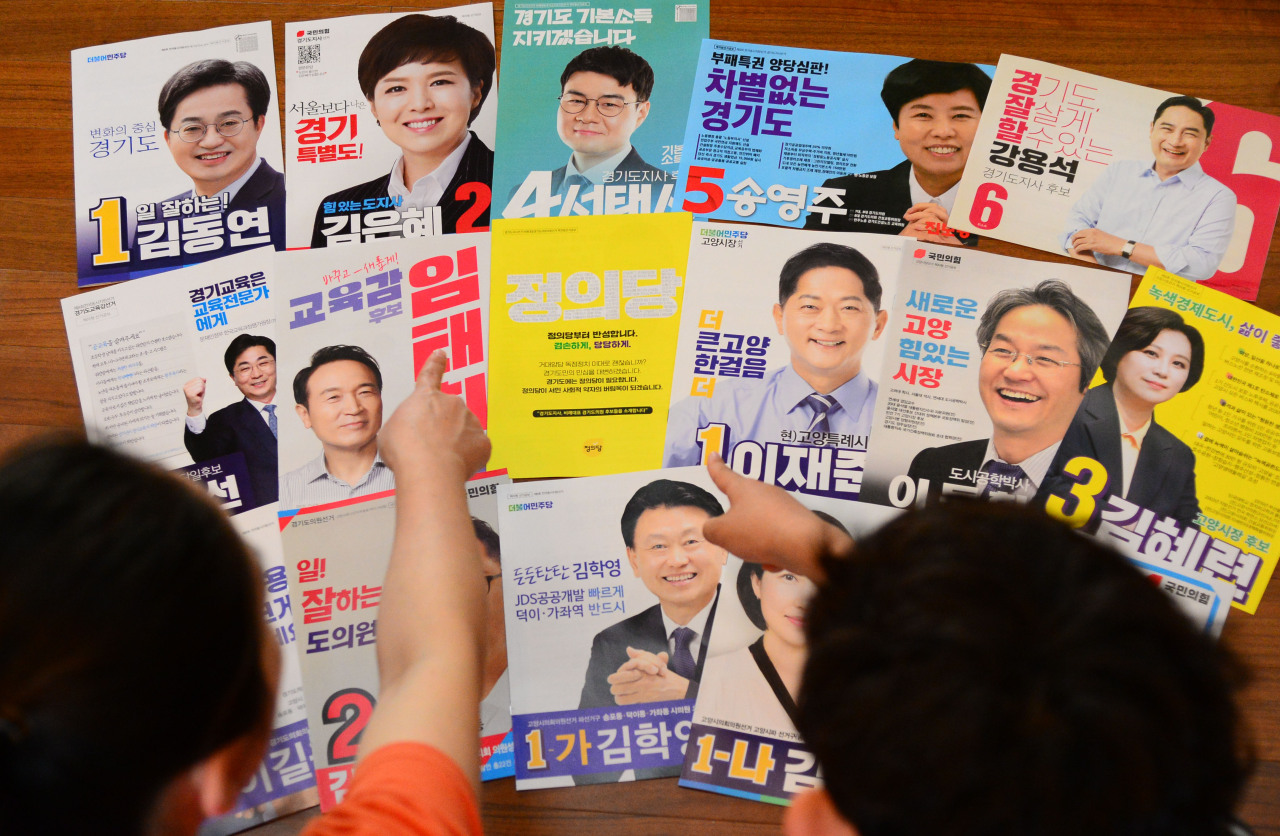 Candidates` campaigning materials (Park Hae-mook/The Korea Herald)
With just seven days left until the local elections and parliamentary by-elections on June 1, latest public opinion surveys are hinting a clear lead for the ruling People Power Party and its candidates in many regions.

Out of 17 metropolitan mayoral and gubernatorial elections, the People Power Party has shown a strong lead in 10 of the posts, compared to four for the main opposition Democratic Party of Korea. The prospects are still uncertain for three out of the 17 major posts.

The country on June 1 will also choose 226 new heads of local administrative units as well as 3,381 new members of metropolitan, provincial, city, county and municipal district councils. Seven constituencies will be electing new lawmakers to represent them at the National Assembly.

Poll results revealed Wednesday are the last surveys that will be allowed for release ahead of the June 1 elections, as the National Election Commission prohibits releasing election poll results from six days before the day of election.

The election watchdog’s official guideline says that the purpose of prohibiting the announcement is to “prevent the possibility of an announcement influencing the elections and distorting the will of voters, therefore hampering the fairness of an election.”

The People Power Party has maintained a strong lead in the mayoral elections for Seoul and Incheon, where its candidates maintained the lead in all public opinion surveys released thus far.

Oh Se-hoon, the People Power Party candidate running to serve for the fourth time as Seoul mayor, has always stayed ahead of Democratic Party rival Song Young-gil by more than 10 percentage points.

The Incheon mayor election also looks to pan out in a similar manner, despite being in a smaller margin of difference. Yoo Jeong-bok of the People Power Party has never fallen behind Park Nam-choon of the Democratic Party in poll results, despite Park being the incumbent mayor for the city.

Yet the race is still tight for the Gyeonggi Province gubernatorial election, partly because resident’s loyalties still lie with Lee Jae-myung, the former Gyeonggi Province governor who made an unsuccessful bid for presidency in March.

Kim Eun-hye, flagbearer for the ruling party in the gubernatorial election, was seen to be leading five out of eight opinion surveys released since Sunday, while her rival, Kim Dong-yeon of the Democratic Party, was leading in the remaining three.

But the margin of difference between them in these surveys are slim, indicating the race remains uncertain for either candidates.

Another heated two-way race is underway in the South Chungcheong gubernatorial election between Kim Tae-heum of the ruling party and Yang Seung-jo of the main opposition party.

The People Power Party is in the lead for the Sejong mayoral election for the time being, but many surveys indicated its lead against the Democratic Party is only by a small margin, hinting changes are possible within the remaining days.

The conservative bloc has traditionally stayed dominant in the so-called Yeongnam region, which is comprised of North Gyeongsang and South Gyeongsang provinces as well as Daegu, Ulsan and Busan.

Candidates with the People Power Party running for metropolitan mayoral and gubernatorial elections there have been maintaining a solid lead in the opinion surveys released thus far, and is unlikely to be overturned unless any mudslinging occurs in the remaining days.

The liberal party also has its stronghold of the Honam region spanning Gwangju and North Jeolla and South Jeolla provinces, and Democratic Party candidates there have been leading all opinion surveys there for weeks. The Democratic Party is also showing a strong lead in the Jeju Province gubernatorial election.

Both parties have been working to narrow the gap in each other’s strongholds, but it is unlikely these attempts will turn out successful, as the strongholds are rightfully labeled such way after years of accumulated efforts by political factions to solidify their support bases there.

Parliamentary by-elections for seven lawmaker seats to be held on the sidelines of the local elections have also drawn significant attention due to some political heavyweights joining the race.

Ahn Cheol-soo of the People Power Party is running for a constituency in Seongnam, Gyeonggi Province, and surveys so far have put Ahn in a clear lead over Kim Byoung-kwan of the Democratic Party, as much as by nearly 30 percentage points.

Lee Jae-myung of the Democratic Party faces an unexpectedly close race for a constituency in Gyeyang-gu of Incheon against Yoon Hyeong-seon of the People Power Party. The survey results have clouded expectations that Lee Jae-myung will easily prevail, paving the way forward for his entry into central politics and a possible presidency bid in 2027.

With the public’s favorable reception toward the new Yoon Suk-yeol administration and the Democratic Party’s reputation having taken a hit in recent days, things are looking up for the People Power Party.

Both parties are encouraging voters to cast their ballots, as that is one of the only remaining variables left after public opinion surveys are restricted from being released. Local elections usually see much lower voter turnout than other elections, meaning both parties could be losing votes.

For the People Power Party, a high voter turnout could help its candidates win in highly contested areas like Gyeonggi Province. The party hopes to lock down at least 10 out of 17 major posts in the first election it holds as the country’s ruling party.

The Democratic Party on the other hand is in much need of a win after two tough-to-swallow election defeats. Should things turn out badly, the party may have to extensively overhaul its leadership and start fresh to win back public trust.