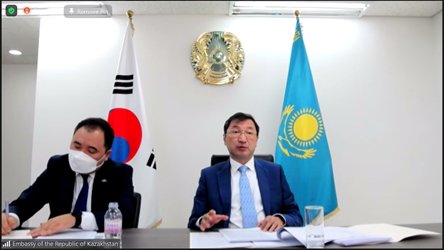 Speaking at a roundtable on constitutional reform via video conference, Kazakh Ambassador Bakyt Dyussenbayev said that the planned reform -- up for a referendum on June 5 -- will transform his country’s political system.

The online roundtable discussed the referendum on constitutional reform and Kazakhstan people’s participation.

Discussing salient features of the reforms, Dyussenbayev highlighted major amendments in Kazakhstan’s constitution, directions of political reforms such as completing the transition from the super-presidential model to a presidential republic, reallocation of numerous powers, and changing the role and status of the parliament.

“Constitutional reforms will create an optimal balance of relations between the branches of government, and ensure maximum equidistance of the institution of the presidency,” said Dyussenbayev.

According to Dyussenbayev, Article 43 of the Kazakh Constitution is supplemented by paragraph 3, which says that the president cannot be member of a political party while in office, enabling Kazakhstan to transition from a super-presidential model to a presidential republic

He said that, using the same logic, the ban is extended to chairpersons and judges of the Constitutional Court, Supreme court and other courts, the chairpersons and members of the central election commission, the supreme audit chamber of Kazakhstan.

“The presidential quota in the Senate is to be reduced from 15 to 10 deputies and the powers of the Senate are supplemented by the right to approve candidates submitted by Kazakh President for chairpersons of the Constitutional Court and the Supreme Judicial Council,” said Dyussenbayev.

“As a result of the constitutional reform, the legislative branch of government will undergo a significant reformatting. As a result, the role and status of the Parliament and its chambers will significantly increase,” he said.

According to Dyussenbayev, guarantees of local public administration and self-government implemented by local representative and executive bodies are being strengthened to increase people’s participation in Kazakhstan’s governance.

The legal status and activities of the ombudsperson for human rights will be determined by the constitutional law to strengthen mechanisms for protecting the rights of citizens, according to Dyussenbayevv.

The ambassador stressed the importance of participation of Kazakhstan nationals overseas, saying the referendum would open a new era in history, referring to President Tokayev’s mention of post-referendum Kazakhstan as a second republic.

“Constituencies will be opened and we will celebrate here in Seoul the referendum for all citizens of Kazakhstan on June 5,” said Dyussenbayev.

“More than 60 constituencies will be opened all over the world,” he underlined.