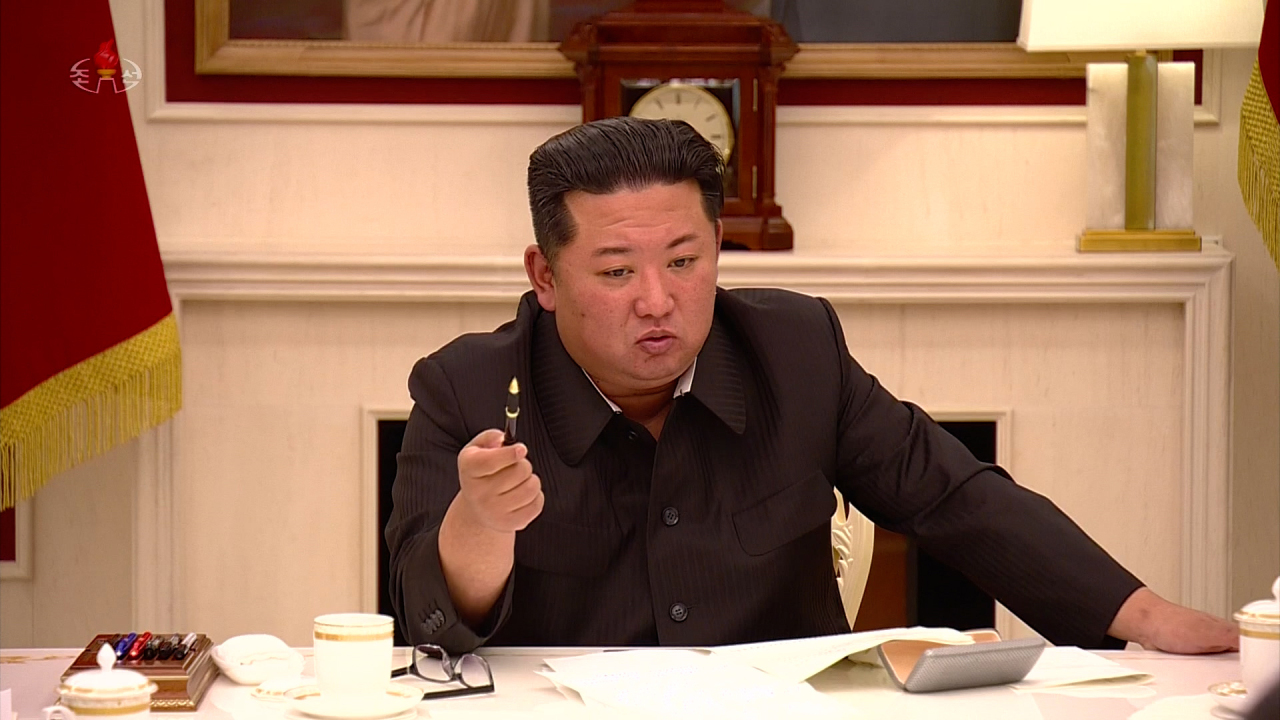 North Korean leader Kim Jong-un attends a politburo meeting of the Worker’s Party at the headquarters of the party’s Central Committee in Pyongyang on Tuesday in this photo from the state-run Korean Central Television. (Yonhap)
North Korea appears to be preparing for a possible intercontinental ballistic missile test within the next 48 to 96 hours in time for US President Joe Biden’s visit to Seoul and Tokyo this weekend, CNN reported Wednesday.

An official familiar with the matter told CNN that a government assessment shows that “things we have noticed in the past for a launch are the things we are noticing now.”

While the official did not provide specific details on the latest satellite imagery they observed, he said that the launch site is located near Pyongyang.

The US official also said the US believes the previous ICBM launches by North Korea had failed, exploding shortly after launch.

The two ballistic missile tests on Feb. 26 and March 4 were also observed to involve a new type of ICBM currently being developed by Pyongyang, the official said.

South Korea’s Joint Chiefs of Staff refrained from commenting on the potential ICBM launch nor on the past launches, but said its intelligence authorities are closely watching the situation together with the United States.

Biden is scheduled to depart for South Korea on Thursday (US time) and hold a summit with South Korean President Yoon Suk-yeol here on Saturday. He will then take off to Tokyo for the Quadrilateral Security Dialogue, a US-led regional security forum that includes Australia, India and Japan.

So far, the North has conducted 16 rounds of test-firing its missiles, ICBMs that are assumed to be capable of hitting the mainland United States.

The reclusive regime also appears to be preparing for a seventh underground nuclear test at its Punggye-ri nuclear test site, according to assessments from Korean and US intelligence agencies. If carried out, the nuclear test would be the first in nearly five years since the last test in 2017.
The North is currently suffering from an explosive spread of COVID-19 which is testing North Korean leader Kim Jong-un’s leadership.

Observers here say that Kim may push to continue with the possible nuclear test and missile launches as a way to boost his standing.