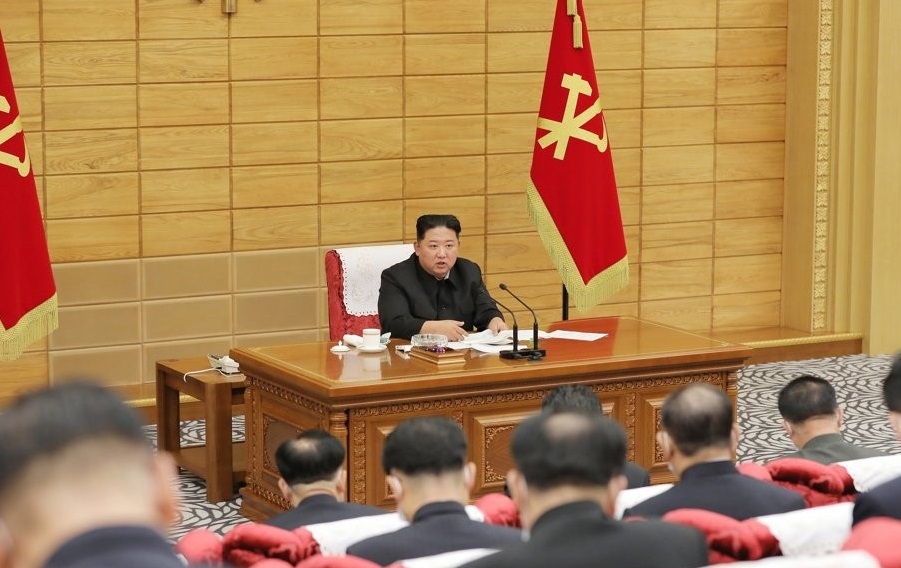 North Korean leader Kim Jong-un (C) speaks at a politburo meeting of the ruling Workers` Party to inspect the country`s antivirus efforts against the COVID-19 pandemic on May 14, 2022, in this photo released by the North`s official Korean Central News Agency. (For Use Only in the Republic of Korea. No Redistribution) (Yonhap)
North Korea on Saturday reported 21 additional COVID-19 deaths, with more than 174,400 people nationwide feverish, as its leader Kim Jong-un stated that his country is faced with "great turmoil" due to the spread of the virus.

Mainly discussed in the session were ways for the swift supply and distribution of emergency medical supplies, according to the official Korean Central News Agency.

He was briefed on the current situation from the state emergency epidemic prevention headquarters and described it as "great turmoil since the country's founding," it reported.

He urged relevant authorities to learn from the "successful" coronavirus control measures of other countries, including China.

A total of around 524,440 people in North Korea have shown symptoms of fevers between late April and May 13, the KCNA added. Among them, 243,630 have been completely cured, with roughly 280,810 being treated.

The reported number of coronavirus-linked deaths in the North has climbed to 27.

Kim, meanwhile, called for "faith" that the virus crisis can be overcome soon, stressing it is not "uncontrollable," as it is restricted within certain regions that have already been put under lockdown.

On Thursday, the reclusive North announced its first outbreak of COVID-19 since January 2020. (Yonhap)