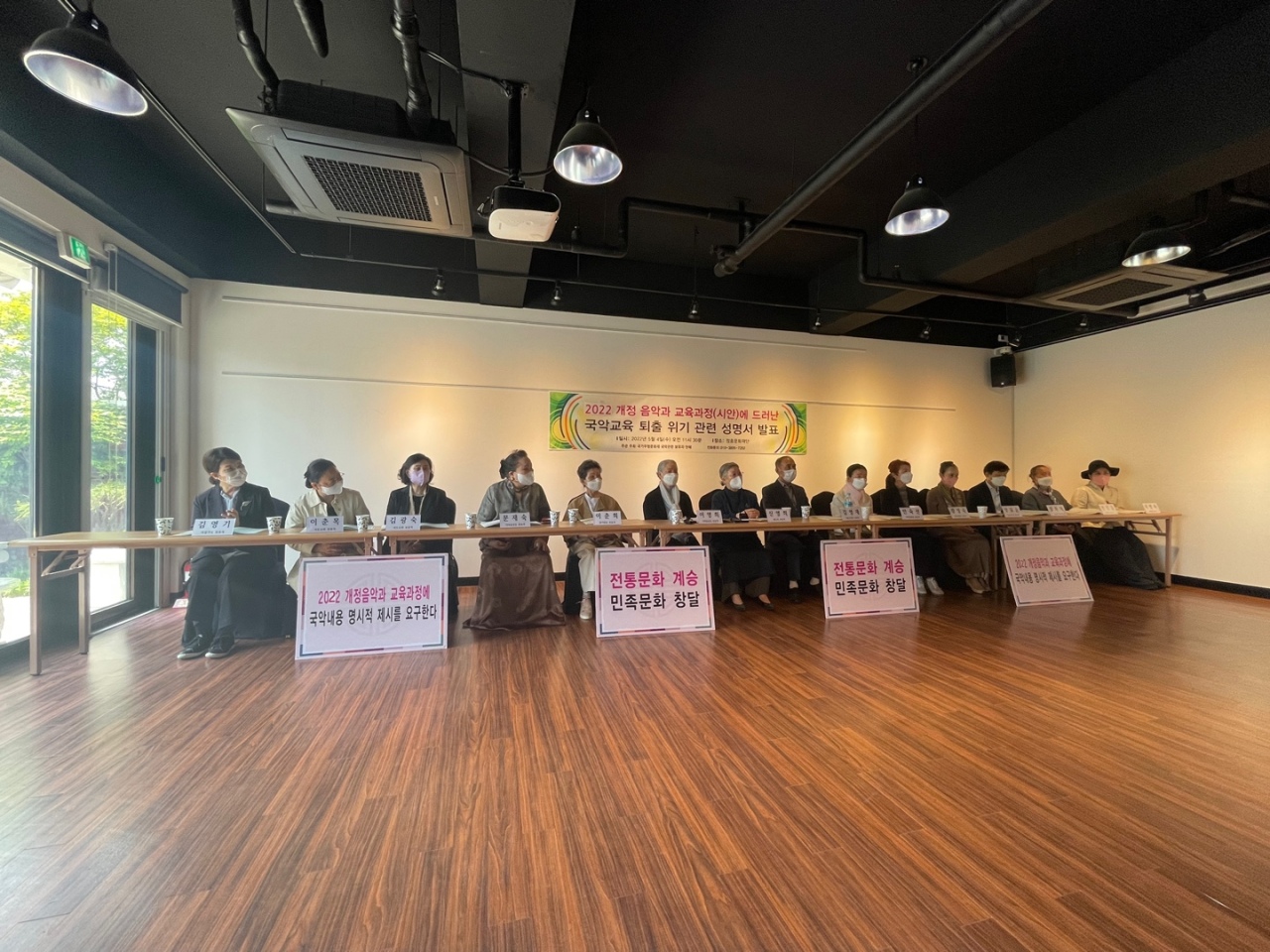 A total of 12 Intangible Cultural Heritage Masters and dozens of educators gathered Wednesday in southeast Seoul to protest a newly proposed school curriculum, calling it a “massacre of gugak.”

“We have devoted our lives with pride to maintaining the national culture. Our efforts were recognized in the form of ‘human cultural heritage’ but we recently heard that gugak-related parts will be omitted in the upcoming music curriculum,” Lee said in a statement. “Our honor as Intangible Cultural Heritage Masters means nothing when our younger generations cannot learn gugak.”

Like Lee, many who assembled on the day have long been in the list of Intangible Cultural Heritage Masters, consisting of 175 artists pursing traditional Korean arts.

“Who was all that for? Many of us went through severe poverty so that the next generation could develop and flourish with gugak,” Moon Jae-sook, another master of gayageum, told reporters.

“This is an unacceptable action that gukak is neglected when it should be leading K-culture.”

Lee and others at the press conference cited Article 9 of the country’s Constitution multiple times, and insisted removing gugak from school curriculum is against the spirit of the Constitution. Article 9 reads, “The State shall strive to sustain and develop the cultural heritage and to enhance national culture.”

Currently, the 2015 edition of music curriculum for elementary, middle and high schools devotes about 30 percent to 40 percent to traditional Korean music.

“Without music, Korean dancing could not exist. Traditional Korean dancing is on the verge of disappearing as it is,” Yang Kil-Soon, an Intangible Cultural Heritage Master of Salpuri, a form of dance.

“If BTS didn’t know what Arirang is or what fan dancing was, would it have been possible for them to perform them so that the world could know?” Lee noted.

“We don’t demand too much -- just maintain the level of gugak education at the current level,” Jung Eun-gyeong, a music professor at Busan National University of Education, said. “The research team that is drafting a new curriculum is biased because four out of five of them have majored in Western music,” Jeong added.

Jeong explained that the new draft omits some gugak concepts and removed a mandate to teach gugak.

“Early education is very important. Without learning gugak at an early age, children wouldn’t even know the name of traditional instruments and ultimately the spirit of our nation,” Kim Young-jae, a master of Geomungo said. Geomungo is a traditional Korean zither with both bridges and frets.

The Ministry of Education rebutted the gugak musicians and educators’ claim and said that it is trying to make a balanced curriculum and the second phase of the drafting process will begin later this year.

The group warned of a bigger protest on May 15, which is Teacher’s Day.

“We rarely gather to protest like this. But this is an extremely important cause for us and we will perform in protest that day with our students,” Moon said.