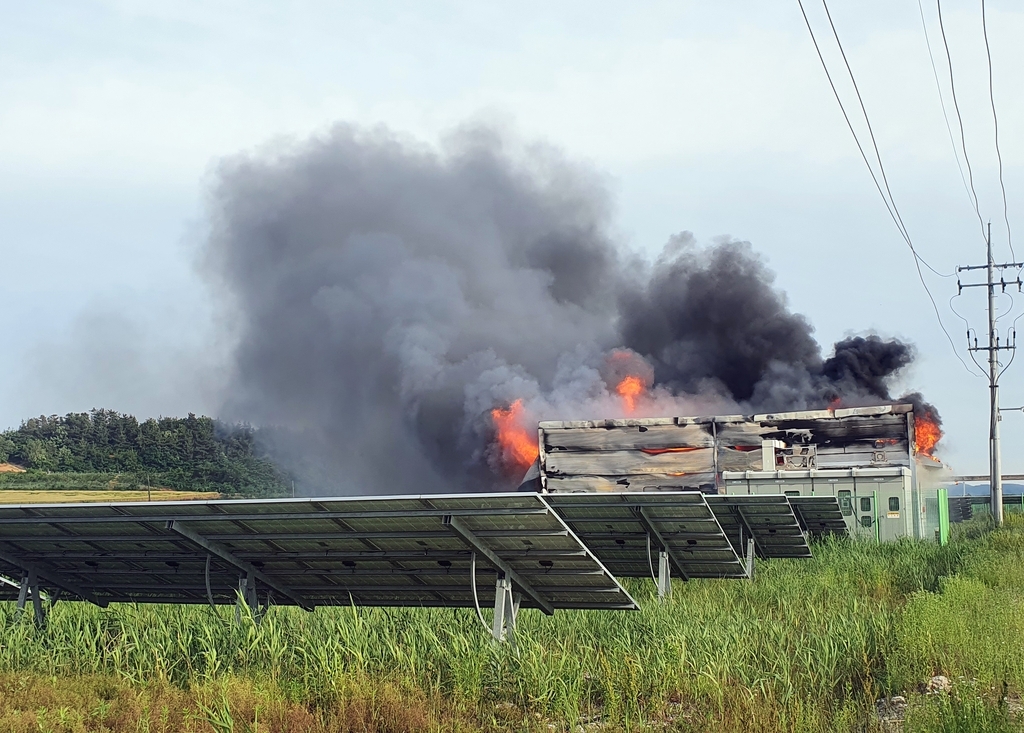 This photo shows a fire that broke out at a solar power grid's energy storage system in Haenam County, South Jeolla Province, in May 2020. (Courtesy of Haenam Fire Station)
The Energy Ministry on Tuesday proposed a new set of tightened measures to prevent lithium-ion batteries mounted on energy storage systems in South Korea from catching fire.

The government will seek to revise the law to force battery vendors in Korea to make sure that the ESS field has ground-fault detectors to prevent current flow from running on the ground, a fire extinguishing system and devices to mitigate the internal pressure of a battery cell, in the event of a thermal runaway where the temperature rises sharply.

The blueprint for the revision will be determined following an analysis by an external research institution in the future, the Energy Ministry said.

The government said it took about a year to come up with the raft of measures.

This comes as Korea has reported seven ESS fires across the nation since May 2020.

Four reported cases were suspected to have stemmed from fires in batteries used to power ESS, according to the state-run Korea Electrical Safety Corp. on Monday.

The investigations led by Moon Seung-ill, a professor at Seoul National University’s Electric Power Research Institute, showed that either a thermal runaway of the battery cell or an electrical leakage to the ground was witnessed as the fire broke out in a battery cell.

The ESS in the reported cases used batteries produced by LG Energy Solution and Samsung SDI.

The state of charge of Samsung SDI’s battery was found to have reached 95 percent at its highest -- 5 percentage points higher than the upper threshold -- at a damaged ESS facility in South Jeolla Province.

But Samsung SDI argued that the overcharge has nothing to do with the cause of the fire.

Samsung SDI also claimed that its fire extinguishing system is not to blame for its failure to curb the spread of the fire, and instead said it was human error that led to the system malfunction.

Meanwhile, LG Energy Solution said batteries in three fire-hit ESS had problems in their cathode coating, as they were manufactured in Nanjing, China, before August 2018. All such batteries were replaced from May 2021 to March 2022, the company added. Accidents involving batteries by LG Energy Solution occurred in North and South Chungcheong provinces and North Gyeongsang Province.

The probe on three reported cases of ESS fires this year are underway.

This is the third batch of investigations in Korea to identify the cause of ESS fires across the nation, following ones in January and October 2019. Korea has reported a total of over 30 ESS fires.