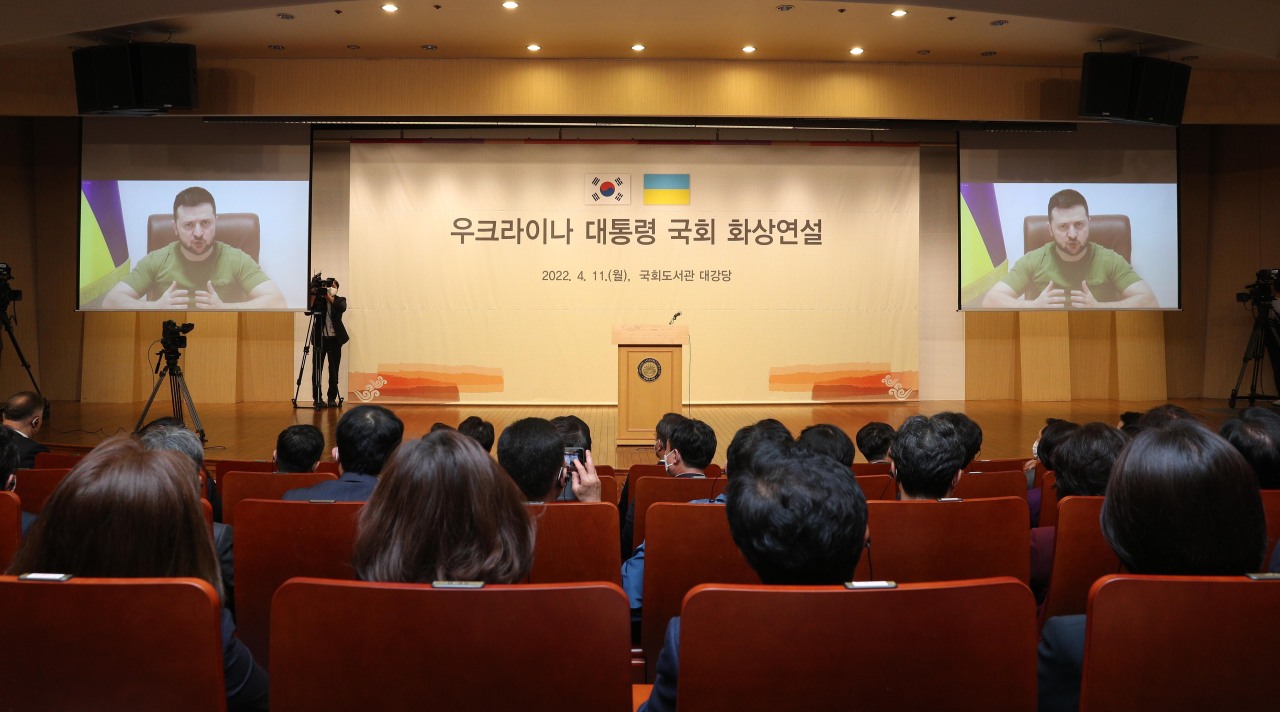 Ukrainian President Volodymyr Zelenskyy gives a virtual speech to the National Assembly in Seoul on April 11. (Joint Press Corps)
South Korea was excluded from the list of countries that Ukraine thanked for support in its ongoing defense against Russia’s invasion, drawing mixed response from the public after the East Asian country publicly provided humanitarian aid, but declined to supply arms.

A video posted by the Ukrainian Ministry of Foreign Affairs’ official Twitter account on Monday showed a list of 31 countries it declared as Ukraine’s “partners,” with Valerii Zaluzhnyi, commander-in-chief of the Armed Forces of Ukraine, thanking them for their “assistance and unwavering support in these hard times.”

The list comprises those countries that have provided lethal weaponry support to Ukraine since the Russian’s invasion on Feb. 24. South Korea and Japan are believed to have been excluded from the list because they did not providehe same level of support to Ukraine during its ongoing military conflict.

South Korea has so far provided 1 billion won ($798,000) of nonlethal military and medical supplies to Ukraine in response to the country’s calls for support to repel Russia’s invasion. Seoul plans to provide additional nonlethal aid worth 2 billion won this month, according to reports.

President-elect Yoon Suk-yeol is also considering expanding humanitarian aid to Ukraine upon the start of his term.

The country is speculated to have rejected requests for lethal weaponry support due to its unique conflict of diplomatic and economic interests, which most likely restricted the country to providing only humanitarian aid to Ukraine.

Yet South Korea has also been widely criticized for its half-heartedness toward Ukraine, especially when hosting Ukrainian President Volodymyr Zelenskyy for a virtual address to the National Assembly earlier this month.

Zelenskyy spoke to a largely empty room inside the National Assembly in Yeouido, western Seoul, as only 60 out of 300 legislators came to hear him speak. Some attendees were seen leaving the room during the event, and no standing ovation was given after Zelenskyy concluded his speech, contrasting from scenes in other global legislatures.

Artyom Lukin, an international relations professor at the Far Eastern Federal University based in Russia, criticized South Korea and its politicians for being careless regarding Zelenskyy’s speech and failing to supply weapons to Ukraine.

“For the average South Korean, access to sea delicacies has absolute priority over a war in eastern Europe,” Lukin said in a tweet on April 10.

The public was divided in learning that South Korea’s name was excluded from the list of 31 countries, with some accusing Ukraine of downplaying Seoul’s aid for not being lethal weaponry. But others said they can understand the exclusion, as being added to the list would have complicated South Korea’s relationship with Russia moving forward.