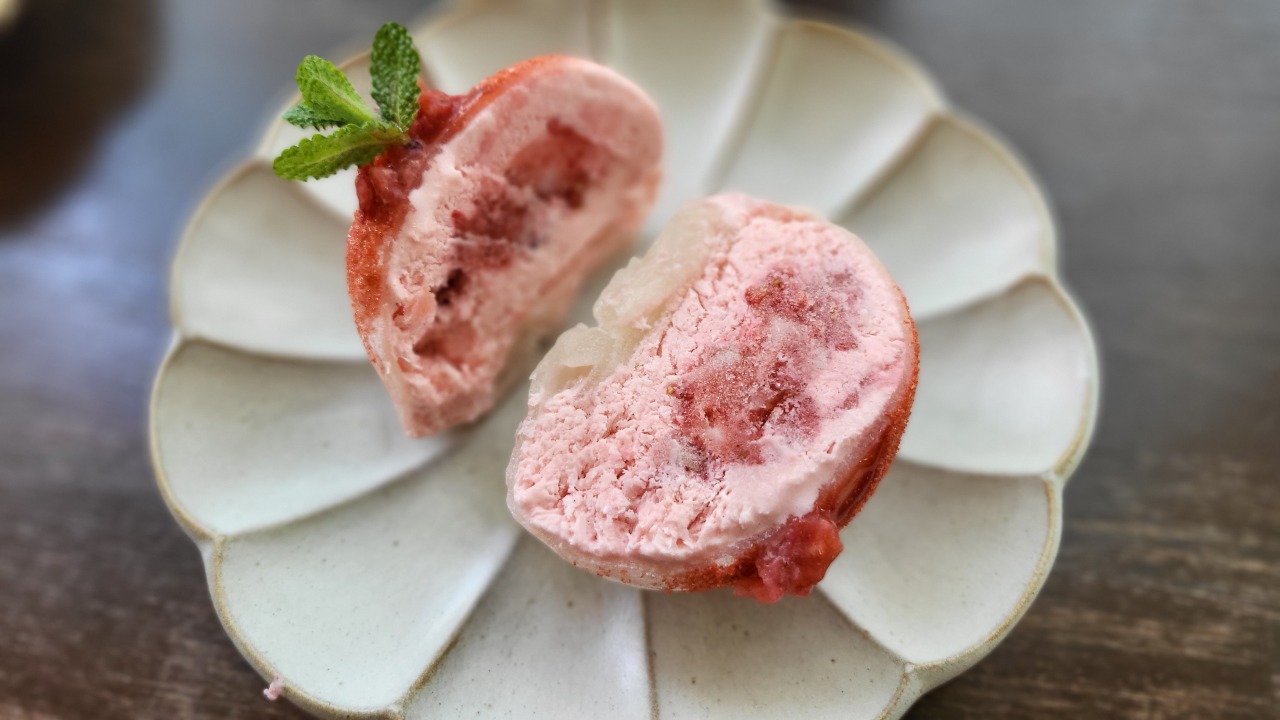 Strawberry ice cream mochi at Ilweolilil (Kim Hae-yeon/ The Korea Herald)
As the weather gets warmer and pandemic restrictions are mostly lifted, ice cream shops and vendors are hoping to present their frozen delights to more customers.

The cold dessert has been loved by Koreans through more than half a century of changes.

In the ‘60s and ’70s, summer months saw ice pop vendors selling the cold treats from their carts in downtown streets and market alleys.

Carried in a portable wooden box, the vividly colored frozen ice pops were sold for 5 won (3 cents) apiece. The frozen pops were hard to bite, hence their nickname “hadeu,“ the Korean pronunciation of the English word “hard.”

Starting in the late 1980s, global ice cream franchises landed in the country, along with donut shops and cafes. Ice cream could now be enjoyed at ice cream parlors.

Since most independent ice cream shop owners are big fans of ice cream, they go all out to make unique creations.

The following are three ice cream parlors in Seoul that are getting outstanding reviews on social media and dining apps. 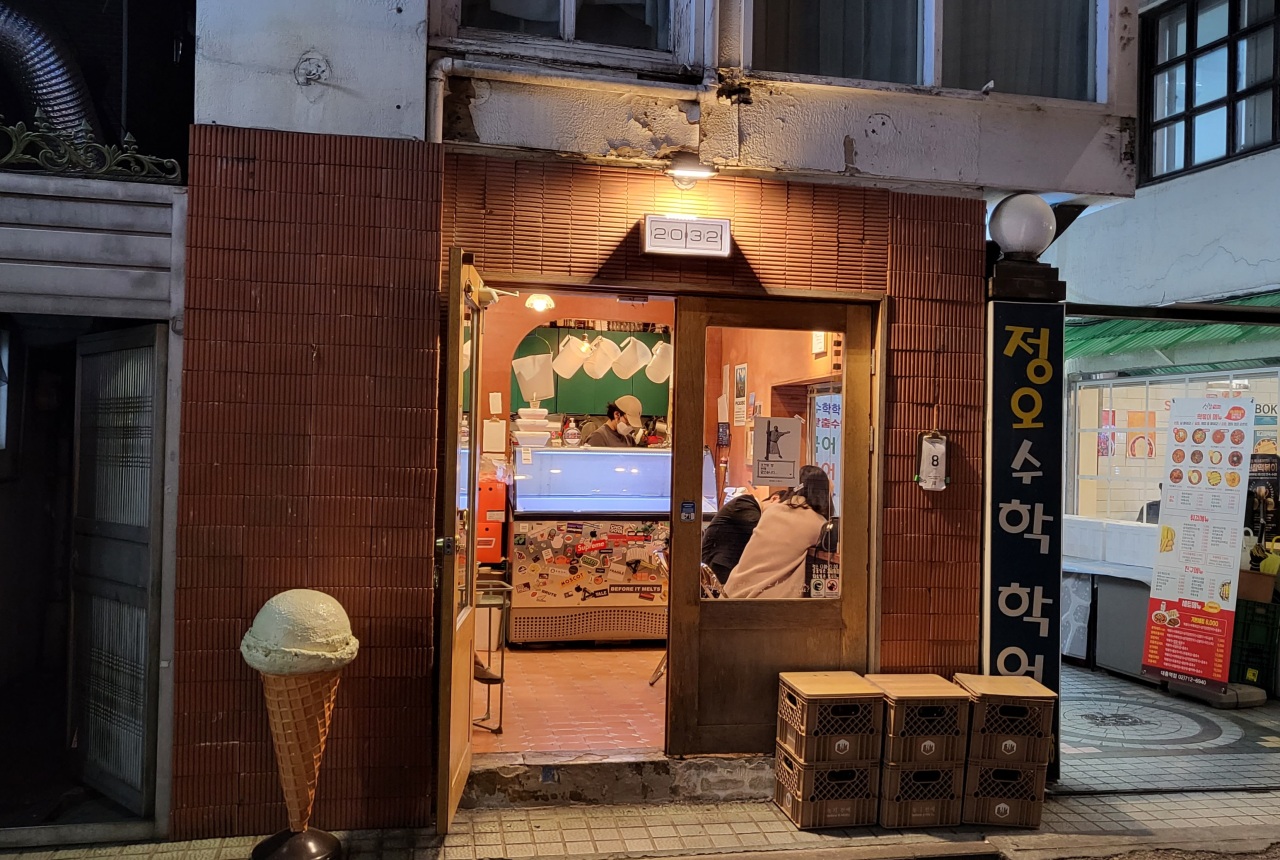 Before it melts located next to Seogang University, western Seoul (Kim Hae-yeon/ The Korea Herald)
Everyone has their own childhood memories linked to ice cream.

A five-minute walk from Daeheung Station Exit No. 2 is Before it melts, a cozy and humble ice cream shop with an interior featuring wooden furniture.

“A spoonful of ice cream always gave me a moment of small joy in my childhood years,” Before it melts owner Park Jeong-soo told The Korea Herald. “As a kid, it also felt magical to feel the ice cream turning into liquid from a solid state when in the mouth. It does not take long until you crave another spoonful.” 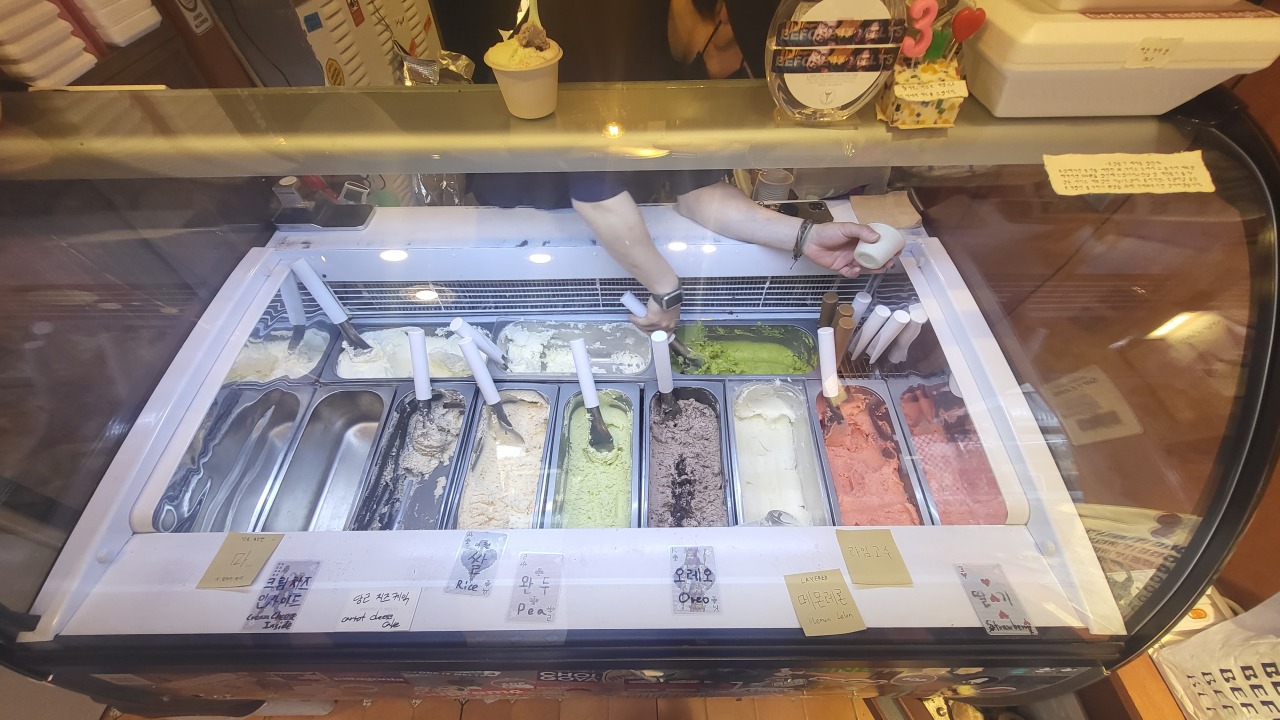 “Our regulars still have a sense of excitement heading to our store, not knowing which flavor they will get.”

Flavors at Before it melts range from perilla leaf and bellflower, to basil tomato and Icheon rice.

Their ice creams fall on the light and watery side, and are neither chunky nor rich.

Two scoops in a small cup or cone costs 4,700 won. Upon ordering, an additional flavor of one’s choice is offered on a spoon for a taste. 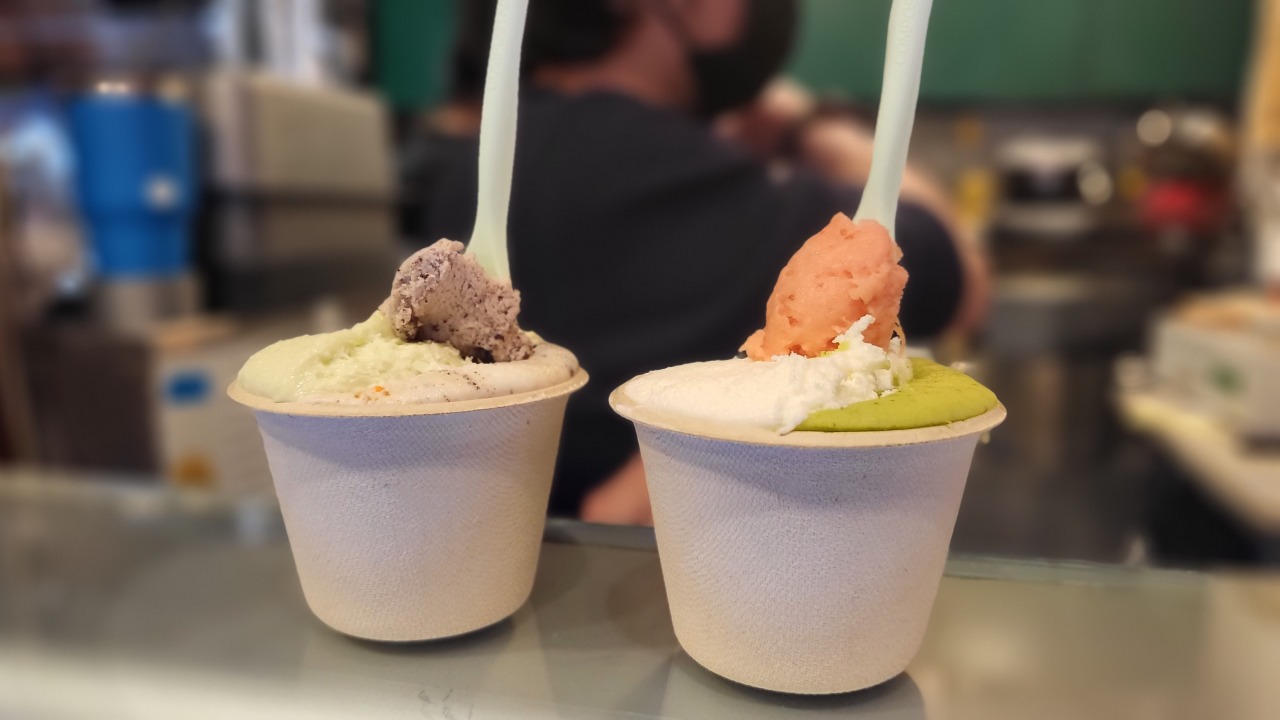 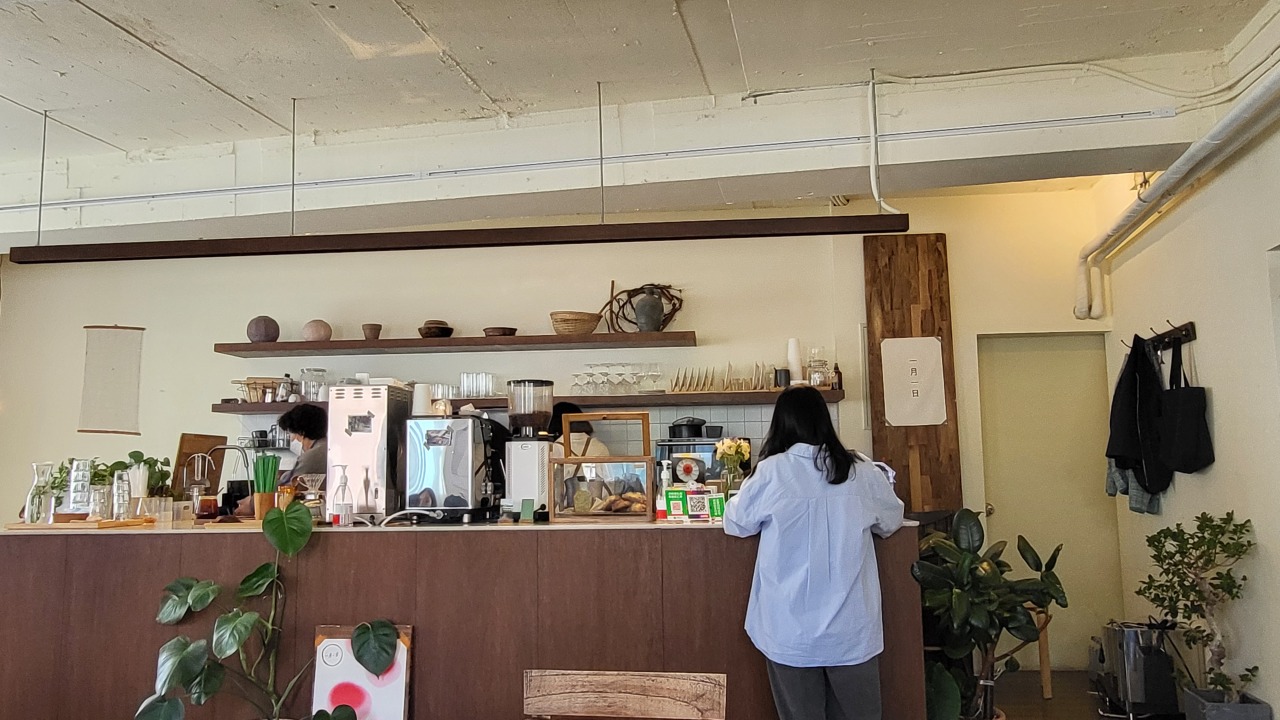 Ilweolilil located on the second floor of a building at Daehangno, central Seoul (Kim Hae-yeon/ The Korea Herald)
Located in Daehangno, Ilweolilil -- the name means Jan. 1 -- is treasured by college students and youngsters who relish enjoying ice cream in the shop‘s homey atmosphere.

Opened in 2018, the cafe on the second floor of a rundown building is best known for ice mochi, freshly made and served year-round.

The cute round-shaped buns made of sticky rice are dressed in different colors according to their flavor.

“Before opening the store, we thought about what would be the best item for people who love ice cream but are also looking for desserts that are filling. We came up with rice cakes with ice cream fillings.” Jang Min-chul, the store owner said.

The buns and ice creams are made at the store. The flavors of ice cream fillings vary depending on the season -- boiled chestnut mochi are available in the fall, for example. Its two signature ice creams, chocolate and strawberry, are served year-round. 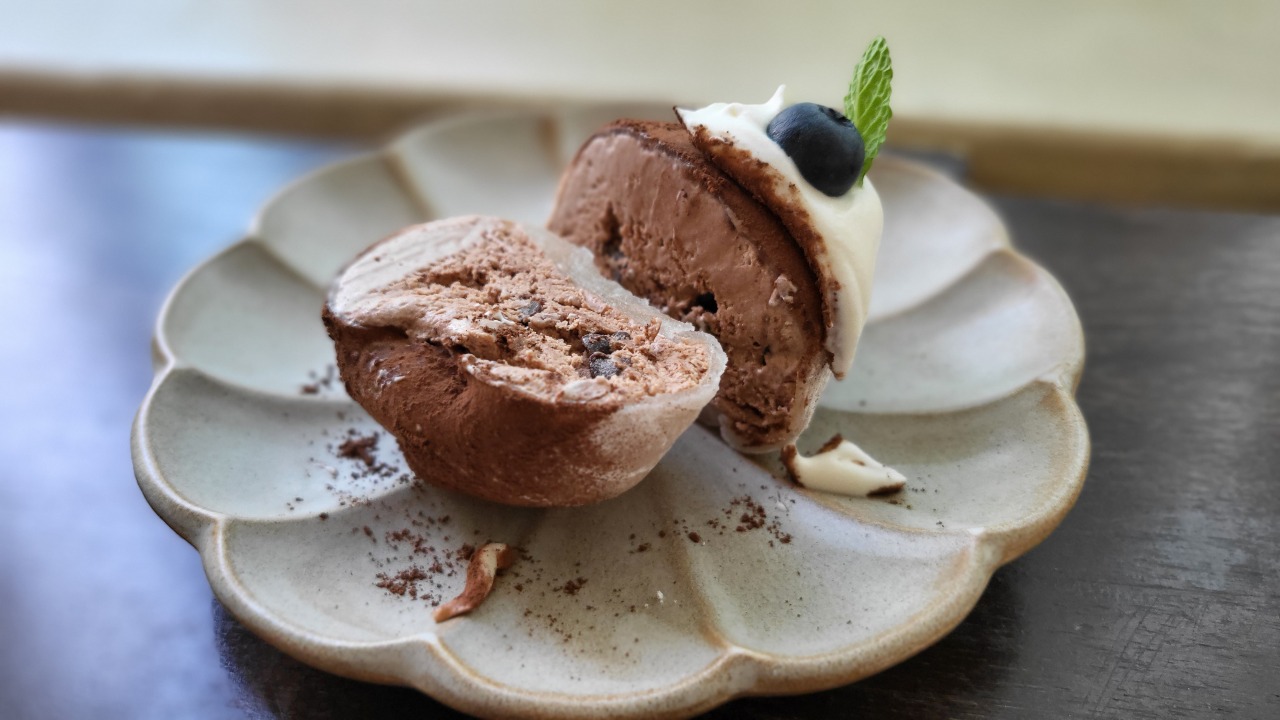 The ice cream inside strawberry mochi has a softer texture, and at first bite, resembles the taste of an ice cold strawberry custard cake.

Ice mochi costs 5,000 won per piece. Sweet pumpkin latte, a drink recommended at the cafe to go with mochi, is priced at 6,500 won. Ilweolilil is closed on Sundays. 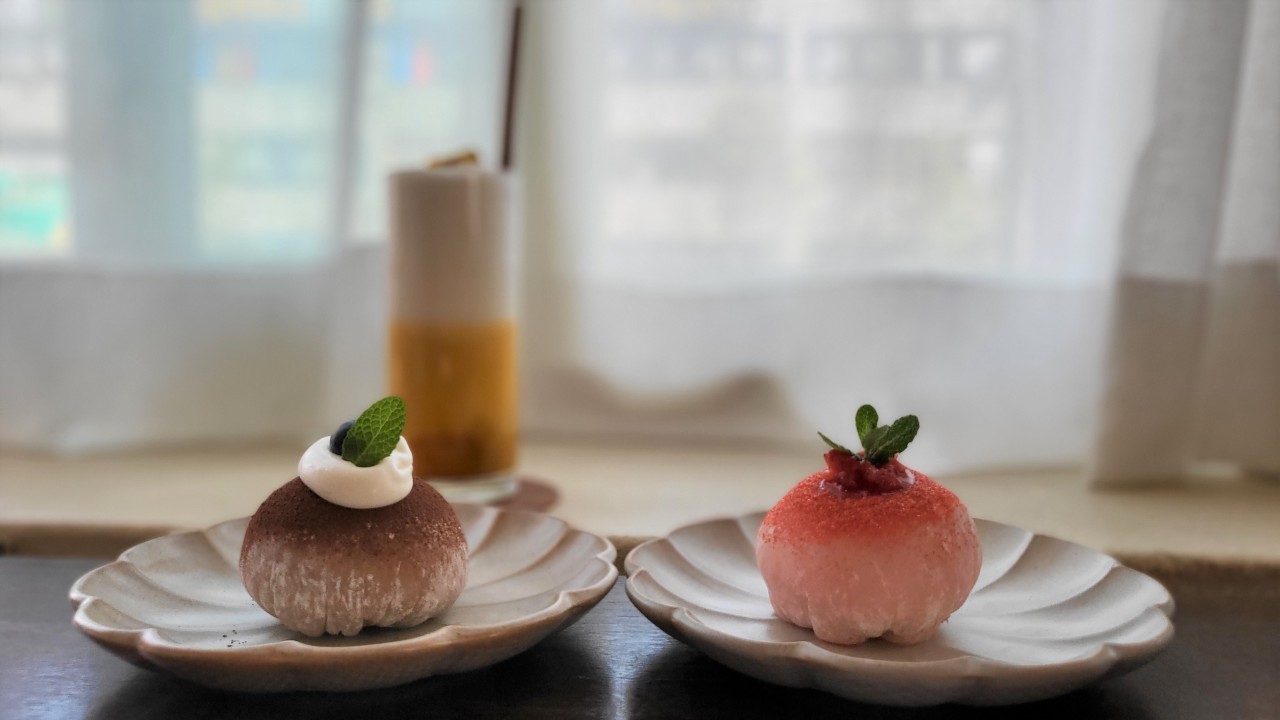 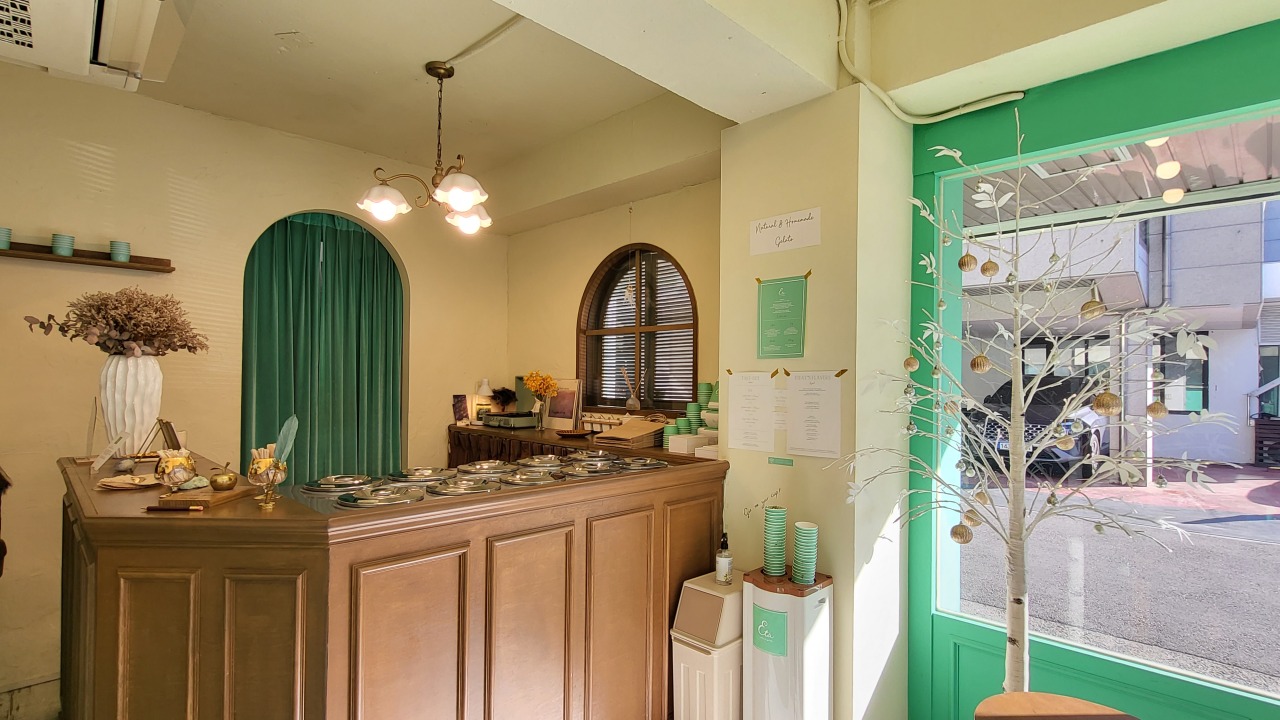 Vintage-look interior of Gelateria Eta, a vegan gelato shop located in the Hongdae area, western Seoul. (Kim Hae-yeon/ The Korea Herald)
For vegans who love ice cream but have difficulty finding a vegan scoop have an option awaiting them in Hongdae.

The sign at the counter notes that the store avoids all animal-derived food ingredients, including honey, and only uses natural plant-based ingredients to make its gelatos.

With thoughtfully sourced ingredients, the gelato shop also offers complimentary dog-friendly gelato. There is a bench just outside the cafe where customers can enjoy a cup of gelato with their pet.

“I have been on a vegan diet for a long time, so I wanted to make vegan ice cream that suits people like me.” the owner of the shop said. “I also wanted to get rid of the preconception that natural ingredients are healthier, and therefore, less tasty.” 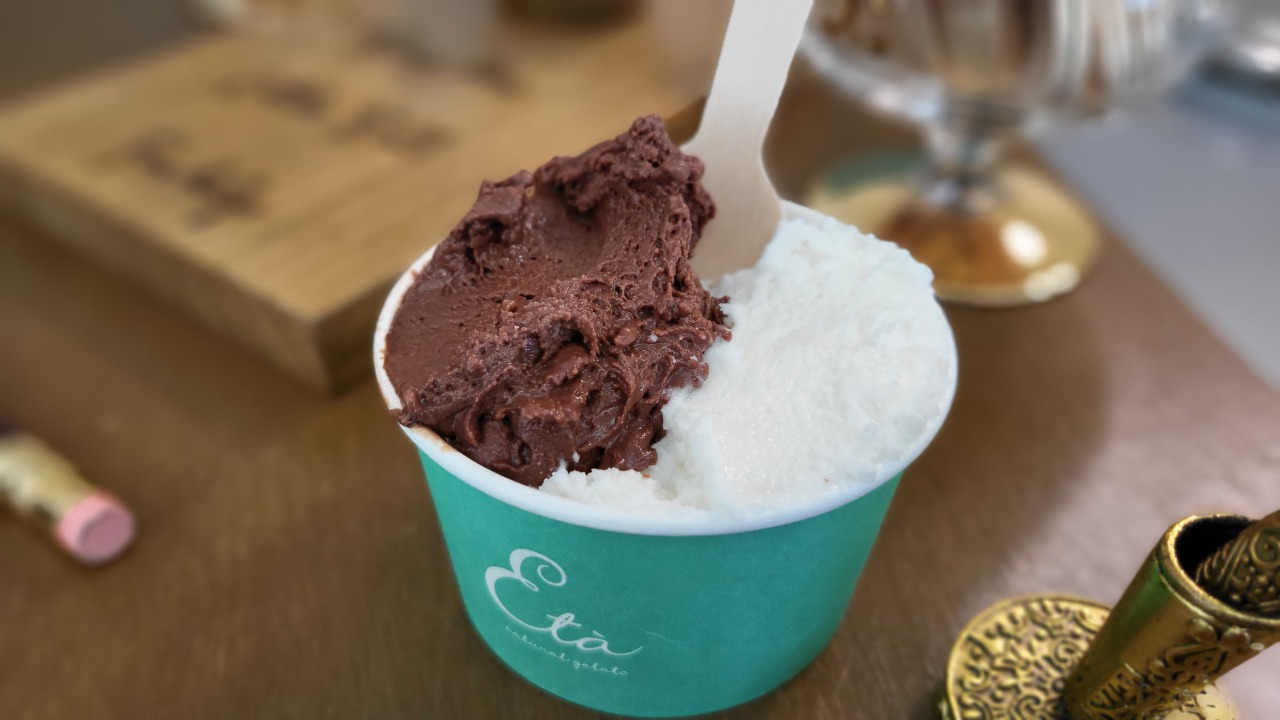 Jack Daniel Valrhona Chocolate and White Pearl Rice flavor served at Gelateria Eta (Kim Hae-yeon/ The Korea Herald)
The texture of gelato is on the thick and creamier side and tastes comparatively less sweet, while boasting rich flavor.

The Jack Daniel Valrhona Chocolate, which contains 0.9 percent alcohol by volume, has a strong aftertaste of bitter alcohol. The White Pearl Rice, one of the shops signature gelatos, uses actual rice grains inside and has a nutty and vanilla-like taste.