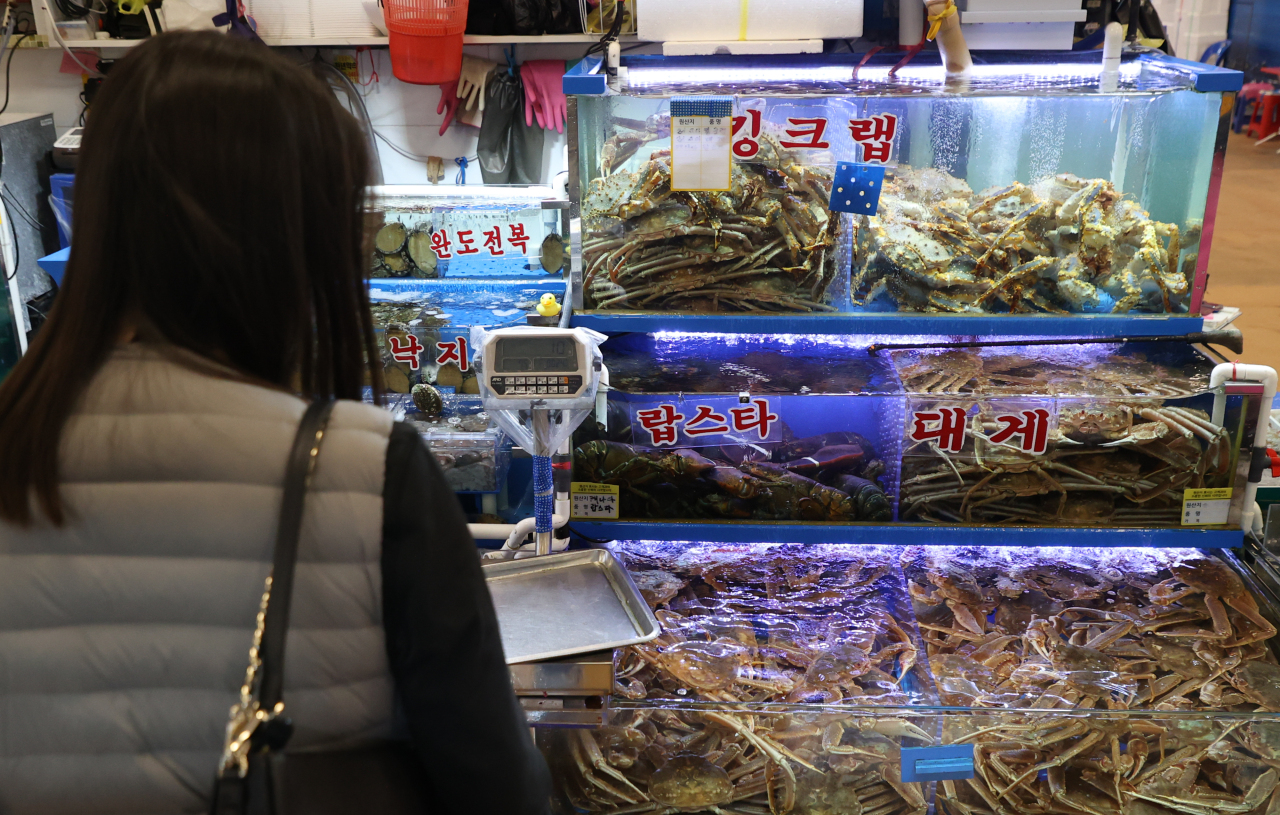 Russia invades Ukraine. China locks down an entire city over the coronavirus. And fresh and meaty crabs are half their usual price at supermarkets in South Korea.

In today’s intertwined world, these things are all linked.

But how much should we care?

It’s bonanza time for crab lovers in South Korea, a local retailer tells seafood aficionados, luring them to come and grab the cut-price crustaceans while they still can.

On Wednesday after work, Heo Kang-hyun, a 36-year-old office worker in Seoul, rushed to the Noryangjin Fisheries Wholesale Market in the west of the city, one of the country’s largest fish markets.

“I regret that I didn’t come here last week, when the prices were around half (what they are today),” said Heo, who bought a kilogram of Russian crab for 69,000 won ($56). 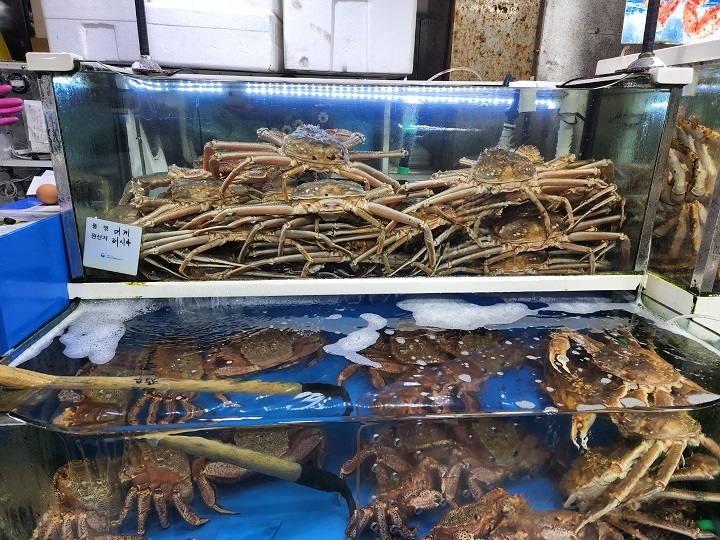 Crabs sit ready for sale in a water tank at the Noryangjin Fisheries Wholesale Market in Seoul. (Choi Jae-hee/The Korea Herald)
In the past weeks, with prices spiraling downward and retailers eager to dump their stock while it was still fresh, social media had been abuzz with chatter about the seasonal delicacy, which is usually too expensive for it to be anything more than a rare treat in most households. 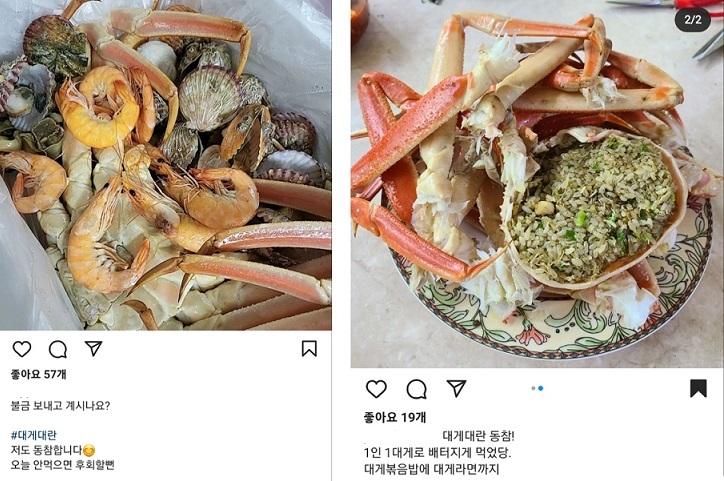 A screenshot of posts on Instagram shows photos of Russian crabs bought at bargain prices. (Instagram)
Like Heo, people late to the party are picking up crabs now even after prices have started to rebound. 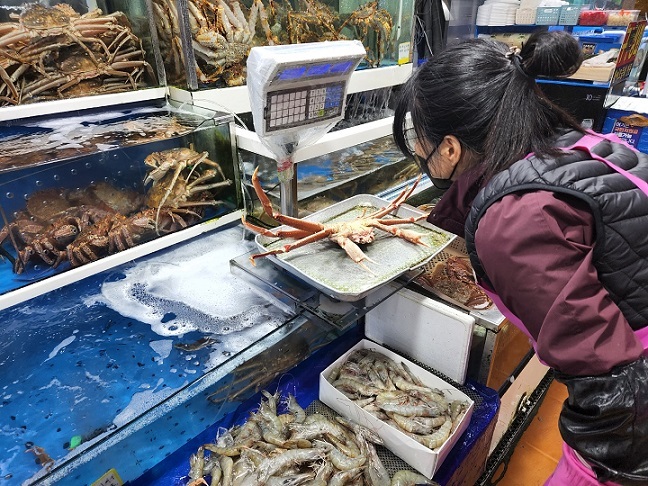 “The market was especially crowded last week as many news outlets reported on plunging prices of Russian crabs. Weekdays usually have 50 percent of weekend sales, but last week, weekdays were just as good as weekends,” said Noh, 53, who owns Daewon, on the second floor of the market.

On Tuesday afternoon, the seafood counter at E-mart in Yeongdeungpo-gu, Seoul, had only Canadian crabs left. 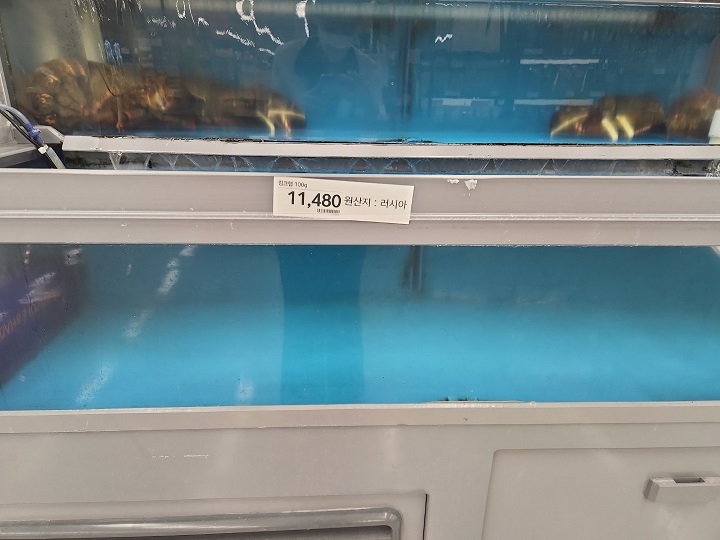 A half-empty water tank displays imported snow crabs, including those from Canada and Russia, at an E-mart in Yeongdeungpo-gu, Seoul. (Choi Jae-hee/The Korea Herald)
“All of the Russian snow crabs, priced between 50,000-60,000 won per kilogram, flew off the shelves around 3 p.m. During a recent seasonal sale period (March 31-April 3) when the price was slightly lower, the crabs were gone from early in the morning,” said a sales clerk in her 40s, who wished to remain anonymous.

The rock-bottom prices of Russian crabs are in part an effect of a war in a faraway land.

In condemnation of Russia’s invasion of Ukraine, the US and European nations have imposed economic sanctions on the country, including a ban on Russian seafood imports.

On top of that, demand for gourmet fare like crab is sharply down in China, as the country has placed Shanghai and other cities under citywide lockdowns. China typically buys 40 percent of Russia’s total crab harvest.

Finally, Korea comes into the picture at peak demand. Crabs, once considered the food of kings, are a seasonal craving during winter and spring. This is when local crabs are the meatiest and a fishing ban is lifted.

During this period, it has been customary for retailers to secure stock of imported crabs, as local catches off Uljin and Yeongdeok, towns along the eastern coast in North Gyeongsang Province known for local snow crabs, are often not sufficient to meet demand.

Data from the Korea Institute for International Economic Policy shows that nearly 99 percent of those imports last year came from Russia.

This season’s logistics, however, have been complicated by Russia’s invasion of Ukraine.

At first, uncertainty over the Russian crab supply drove up prices. Then, midseason, prices plunged as ample supplies were dumped here by Russian crabbers in the face of sanctions and lockdowns in China.

Looking forward, it is hard to tell how local crab prices will move in the coming weeks, an expert said.

“The volume of imported goods, like Russian crabs, can fluctuate depending on global supply conditions. It’s hard to predict whether the price of Russian crabs will further decrease or increase due to heightened market uncertainties,” said Jeong Hyeong-gon, a senior official at the KIEP.

The Korean government has joined multinational sanctions against Russia, including the removal of Moscow from the SWIFT global payment system, but it has stopped short of banning shipments of Russian food products.

While many Koreans sympathize with Ukraine, it does not seem to extend to their shopping behavior. There has been no meaningful boycott of any kind reported against Russian interests here.

Yoon Sang-seop, a 42-year-old office worker in Seoul, thinks purchasing Russian goods is tantamount to supporting its aggression against the Ukrainian people.

“It’s such a shame that Koreans are going crazy for Russian crabs when the US and many European nations imposed sanctions on Russia food imports to condemn its invasion of Ukraine. Money paid to Russia could become a bullet used to kill the Ukrainian people.”

“What’s wrong with purchasing Russian crabs that are already imported here? I don’t think a boycott of snow crabs would take a toll on the Russian government’s financial status. It’s our compatriot merchants who would be most affected by it,” she said.

Others pointed out that it’s not that Koreans are suddenly devouring Russian crabs to take advantage of the war. Russian crabs have been a big part of Koreans’ love of crabs during the winter and spring.

It’s not just crabs, but most other Russian products are avoiding scrutiny here. Last week, two Russian films opened in local cinemas, with another set to premiere next week. This is in contrast to strong backlash against Russian art and artists in Europe.

A clerk at a bakery shop on what is called “Central Asian Street” in Seoul, where Russian honey cakes are sold, said business was carrying on as usual, regardless of the war.

“I read news articles about people overseas launching a boycott of Russian products, but I think the issue has only a limited impact on our shop and others on the street. It seems Koreans are less interested in such collective action,” said Son, who works part-time at the bakery near Dongdaemun Market. 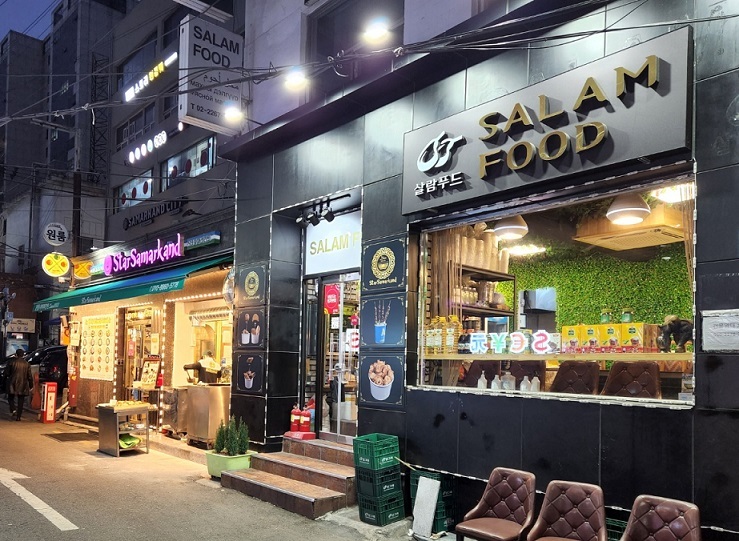 Sheen Seong-ho, a professor at the Graduate School of International Studies at Seoul National University, said that Koreans rarely take action on global issues that do not directly affect Korea.

“Koreans, who have memories of a long history of oppression from foreign forces, share a national characteristic of raging against threats to their ethnicity. They are good at sticking together and carrying out group actions when the national interest is at stake, as seen in the boycott of Japanese goods.

“But when it comes to global issues, involving other ethnic groups to which they are not directly related, such action rarely happens.”

South Koreans waged a nationwide consumer boycott of anything Japanese in the summer of 2019, after Japan imposed export curbs on key materials to South Korea, apparently targeting Korea’s backbone industries of semiconductors and electronics.

“With the rising cost of groceries and daily necessities, people tend to think less about ethical aspects of their purchase and care more about the prices,” said Baek Seung-wok, a sociology professor at Chung-Ang University.

The nation’s consumer prices gained 4.1 percent last month from a year earlier. It was the sharpest increase here in more than a decade.