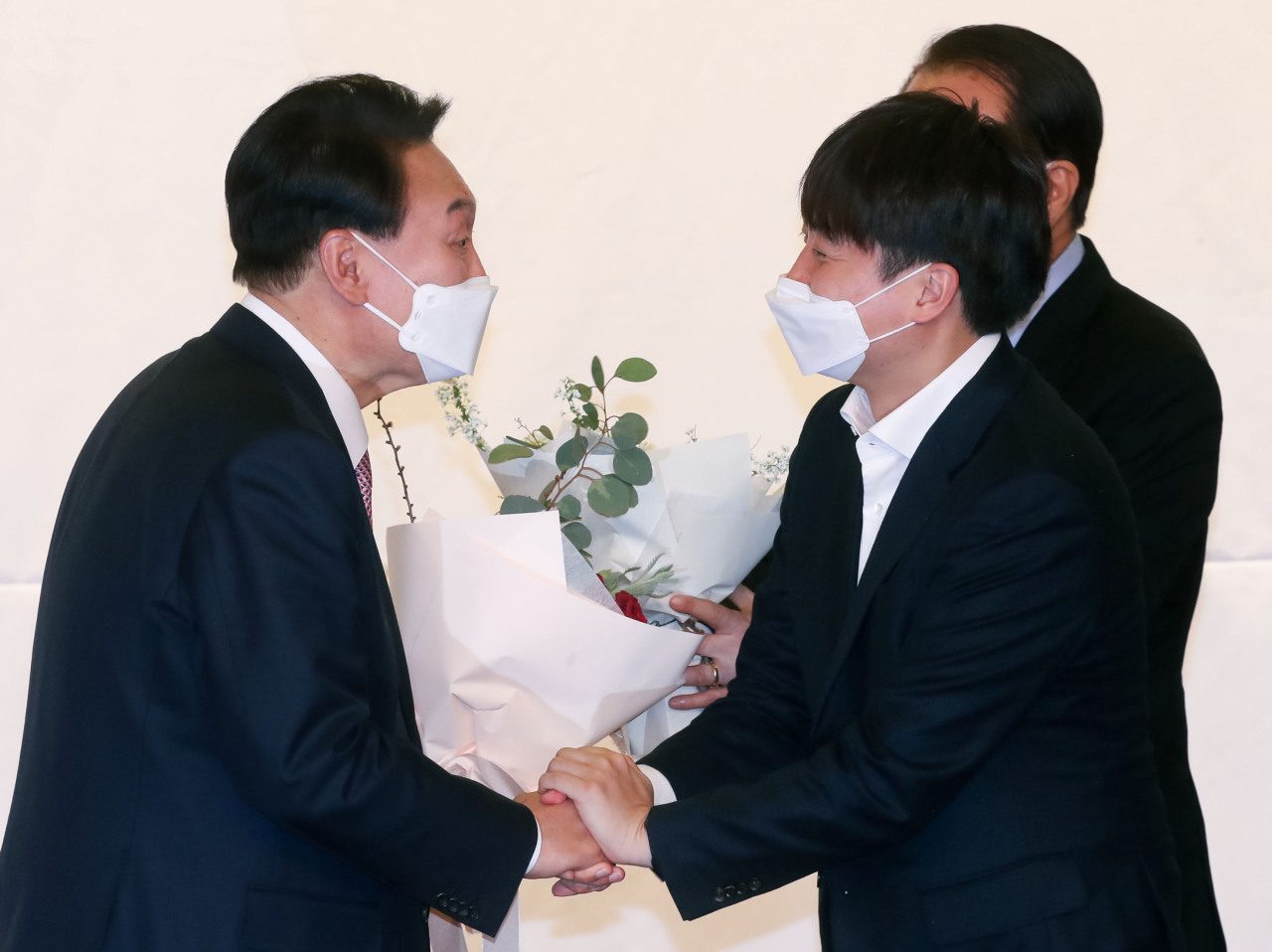 President-elect Yoon Suk-yeol (left) and People Power Party chief Lee Jun-seok exchange a handshake on March 10, a day after the election, at the National Assembly building in central Seoul. (Yonhap)

South Korean President-elect Yoon Suk-yeol’s key election pledge of removing the Ministry of Gender Equality and Family is “premature,” and would give the “completely wrong policy signal,” according to a senior economist at the Organization for Economic Cooperation and Development.

In an email response to The Korea Herald’s inquiries about the main conservative People Power Party president-elect’s gender policy promises, Willem Adema, senior economist in the OECD’s social policy division, stressed that “in terms of gender equality there is still a long way to go in Korea.”

“Not all OECD countries have a Ministry for Gender Equality, but there are always public agencies that further gender equality in public life -- either housed within another ministry or, for example a Prime Minister’s or Cabinet Office,” he said.

“However, gender inequalities in other OECD countries are often not as large as in Korea. Hence, the abolition of the Ministry of Gender Equality seems rather premature and gives completely the wrong policy signal.”

The OECD senior economist’s assessment stands in stark contrast to Yoon’s stance that the Gender Equality Ministry is obsolete. As recently as Sunday, the president-elect reiterated that the ministry “is done serving its purpose in history.”

Yoon has also questioned the existence of systemic gender discrimination in Korea, saying, “Women being discriminated against while men are being given better treatment has become a thing of the past.”

This is not accurate, according to Adema.

“For example, Korea has the largest gender pay gap of OECD countries, a huge gender employment gap -- almost 20 percentage points, the lowest share of women on boards of publicly listed companies. Women are also under-represented in leadership positions in public life and spend far more time at home on unpaid household chores than men,” he said.

Despite widespread economic growth, gender equality in Korea is “still a long way off,” he added.

“Young Korean women may have the edge in educational attainment, but this has not yet been fully translated into labor market equality or leadership in society in general,” he said.

He said change in labor market institutions in particular has been slow. “Men are much more likely to successfully pursue career opportunities in regular employment than women, who often end up in non-regular employment or withdraw from the labor force,” he said.

Korea has ranked last among developed countries for several years in a row in the Economist’s “glass-ceiling index,” which measures the role and influence of women in the workforce.

Yoon’s vow to get rid of the Gender Equality Ministry in a series of efforts to institute what he calls a “merit-based” system has been met by criticism and backlash at home -- even by some within his own party.

Women’s groups have called for retracting the policy pledge, which they claim is “a step backwards,” and the ruling Democratic Party of Korea has likewise criticized it as exacerbating gender inequalities on several occasions.

After the mayor of Seoul’s traditionally conservative Seocho district, Cho Eun-hee of the People Power Party, argued for retaining the ministry on March 10, the party’s leader Lee Jun-seok quickly rebuffed the notion.

The campaign promise “will absolutely be fulfilled,” he said in a radio interview. The ministry “has run its course, and its role and function are unclear, which is why there are talks of abolishing it.” Referring to Cho’s remarks, he urged those within the party to be “careful about criticizing campaign promises.”

Lee, who has long advocated for eliminating the Gender Equality Ministry, is credited as the mastermind behind Yoon’s controversial campaign promise that sought to appeal to young men frustrated with the incumbent administration’s push to increase women’s participation in the workforce and in public office.

In January, Yoon put forward as his policy promise the abolition of the ministry immediately after reconciling with the party chief in the aftermath of an internal power struggle. This move won Yoon the endorsement of a vocal anti-feminist group.

At the end of a divisive campaign, Yoon captured the presidency over his Democratic Party opponent Lee Jae-myung by a razor-thin margin of 0.73 percent last week. Among voters in their 20s, the gender divide was strong. Poll results showed 58 percent of men in their 20s voted Yoon for president while 36 percent picked Lee. By contrast 33 percent of women in the same age cohort cast their votes for Yoon and 58 percent for Lee.

The prospects of the ministry actually being disbanded remains murky, however, as the majority of seats in the parliament are currently held by the opposing Democratic Party. Creating and dismantling Cabinet offices necessitate an amendment to the laws on government organization, which must be approved by the National Assembly. The next general election is not until well into Yoon’s term as president in 2024.