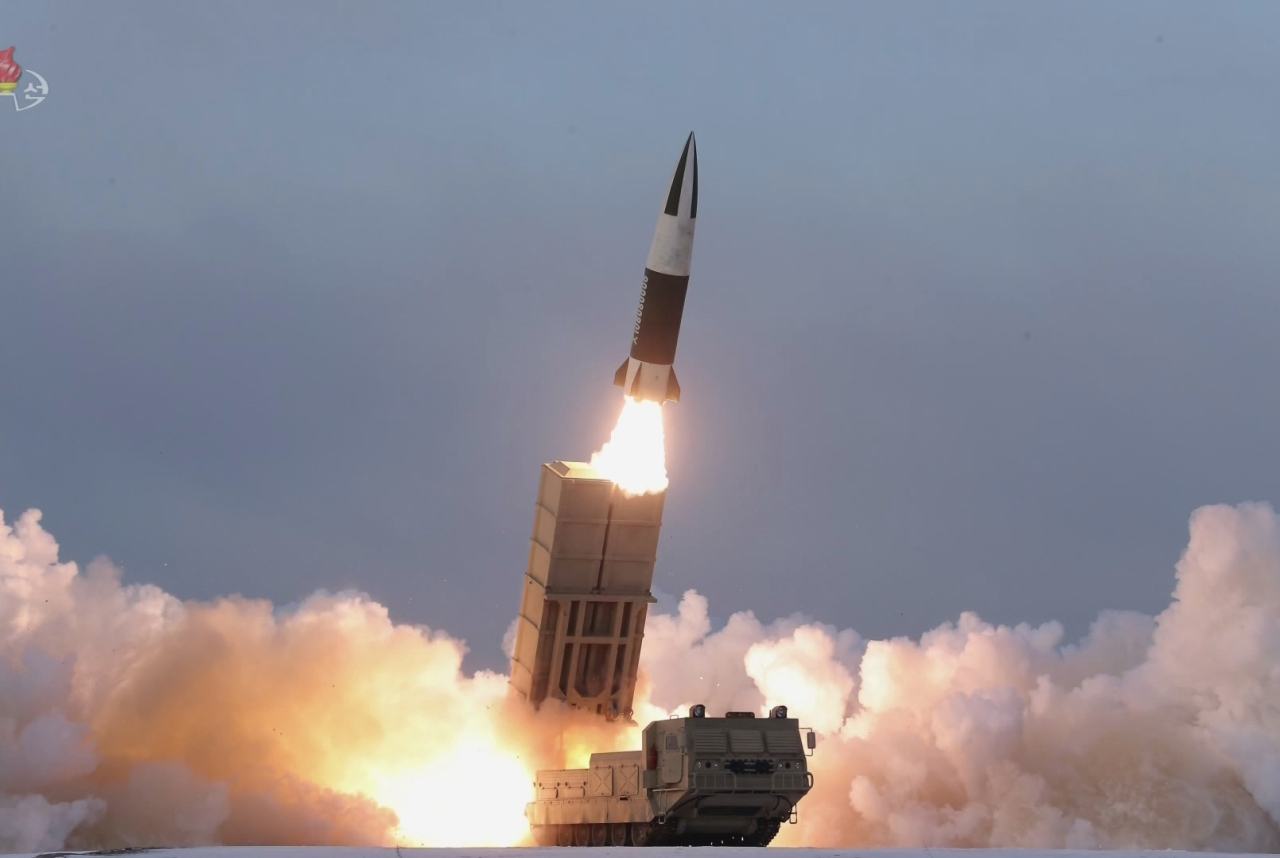 This photo, captured from North Korea's Central TV on Tuesday, shows one of two tactical guided missiles that the North test-fired from a transporter erector launcher toward an island target in the East Sea the previous day. The missile appears to be the North Korean version of the US' Army Tactical Missile System (ATACMS), called the KN-24. (Capture of North Korea's Central TV)
WASHINGTON -- The United States and seven other members of the UN Security Council (UNSC) on Thursday called on all UN members to fully implement UNSC sanctions on North Korea.

The call came after China blocked a US proposal to impose additional UN sanctions against the North for conducting at least four missile launches since the start of the year.

"We also call on all member states to implement Security Council resolutions, to which the Security Council unanimously agreed, and which calls on the DPRK to abandon its weapons of mass destruction and ballistic missile programs in a complete, verifiable, and irreversible manner," said the joint statement, delivered by US Ambassador to the UN Linda Thomas-Greenfield on behalf of her counterparts from Albania, Brazil, Britain, France, Ireland, Japan and the United Arab Emirates.

"It is extremely important that Member States take the necessary steps to implement the sanctions in their jurisdictions, or risk providing a blank check for the DPRK regime to advance its weapons program," the joint statement added. DPRK stands for the Democratic People's Republic of Korea, the North's official name.

The UNSC was originally scheduled to hold a closed session on the day to discuss additional sanctions against North Korea proposed by the US.

China, one of the five permanent members of the UNSC with veto power, blocked the US proposed sanctions, according to earlier news reports.

"We will continue to speak out against the DPRK's destabilizing actions as affronts to regional and international peace and stability," said the joint statement issued by the US and the seven other members of the 15-member UNSC.

They also pointed out the fact that North Korea conducted four missile launches should not be in dispute, noting the North itself has released photos of those launches.

"And we know that DPRK missile launches that use ballistic missile technology violate Security Council resolutions," they said.

"These facts should not be in dispute. The DPRK's unlawful behavior is a threat to international peace and security. These launches demonstrate the regime's determination to pursue weapons of mass destruction and ballistic missile programs at all costs, including at the expense of its own people," they added.

North Korea on Thursday (Seoul time) said it will consider restarting "temporarily-suspended activities," which many believe suggested the resumption of nuclear and long-range missile testing.

Pyongyang has maintained a self-imposed moratorium on nuclear and long-range missile testing since November 2017, although leader Kim Jong-un said in 2019 that he no longer felt bound by such restrictions. (Yonhap)