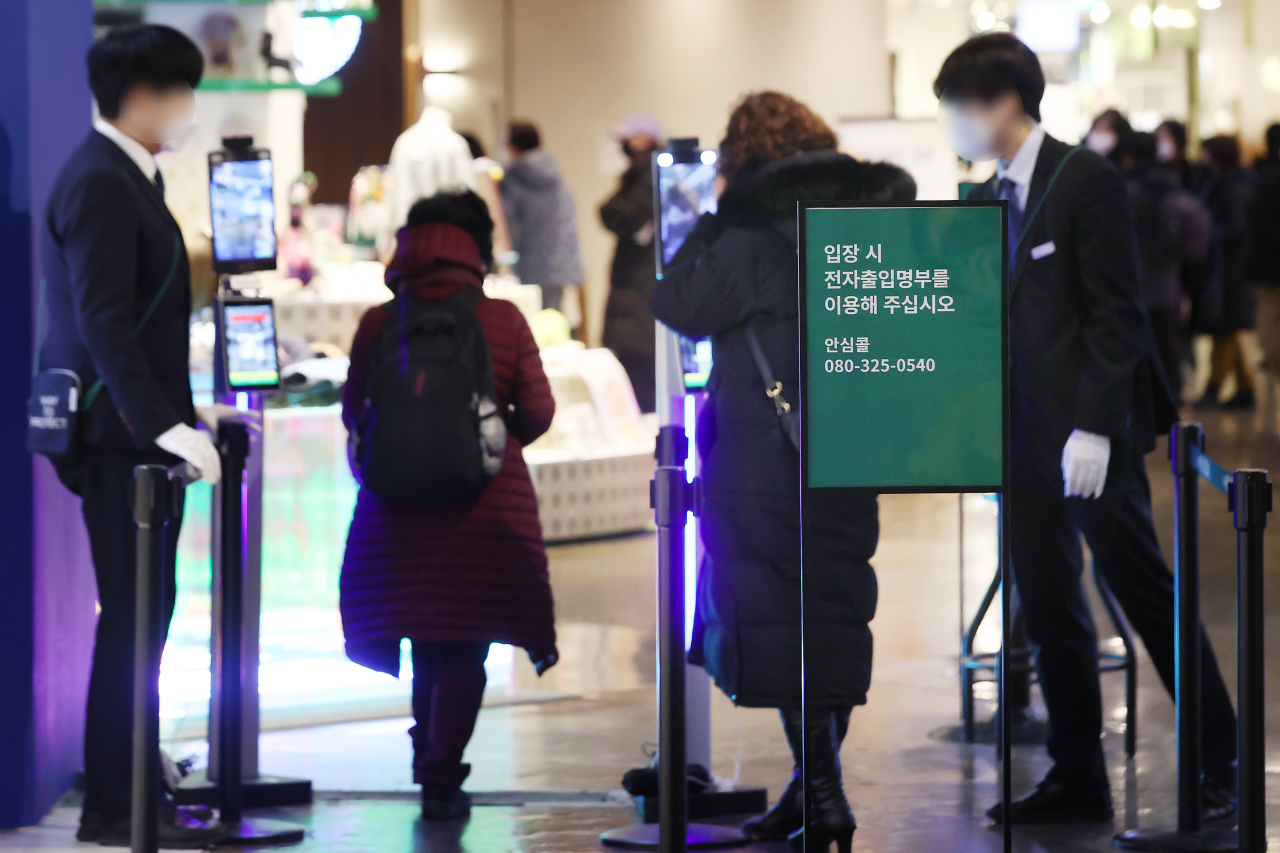 Visitors to a local department store in Seoul check in with a QR code. (Yonhap)
The government is set to announce its latest decision on the vaccine pass mandate Monday, amid continued controversy over the measure.

The measure, which would have prevented unvaccinated people from using a number of facilities including department stores from Monday, has been put on hold in Seoul following the Seoul Administrative Court’s ruling that large shops based in Seoul should be temporarily excluded from the mandate.

Changes following the court‘s decision can spark backlash from local governments and people living outside of Seoul if the court’s ruling that lifts the mandate applies only to the city of Seoul.

The court last Friday suspended the vaccine pass enforcement in Seoul after seeing the city government was a party in the case, but not the Ministry of Health and Welfare and the Korea Disease Control and Prevention Agency.

South Korea, meanwhile, clocked more than 4,000 COVID-19 cases for the fifth day in a row, as of midnight Saturday.

According to the Korea Disease Control and Prevention Agency, the country added 4,194 new COVID-19 infections.

The country reported 29 more COVID-19 deaths on the day, and the number of critically ill COVID-19 patients came to 612.

Although the country’s COVID-19 cases declined from the previous day, health authorities have been on high alert due to the fast spread of the omicron variant.

To reduce the number of imported cases, the government decided to ban all entrants’ use of public transportation upon arrival and tighten rules for negative COVID-19 test results. The measures will go into effect Thursday.

The government said it will maintain a 9 p.m. curfew on restaurants and cafes but raise the limit on the size of private gatherings to six from the current four.

The revised rules will be in place from Monday through Feb. 6, in a bid to contain the spread of the coronavirus ahead of the Lunar New Year holiday that begins late this month.

According to the government’s analysis, the number of patients infected with the omicron variant can account for more than 50 percent of the total number of COVID-19 cases as early as Friday. If the omicron variant accounts for more than 50 percent, the country’s daily COVID-19 cases could well exceed 20,000 in February, the government also speculated.

The government said it will introduce revised measures if the country’s daily COVID-19 cases surpass 7,000.