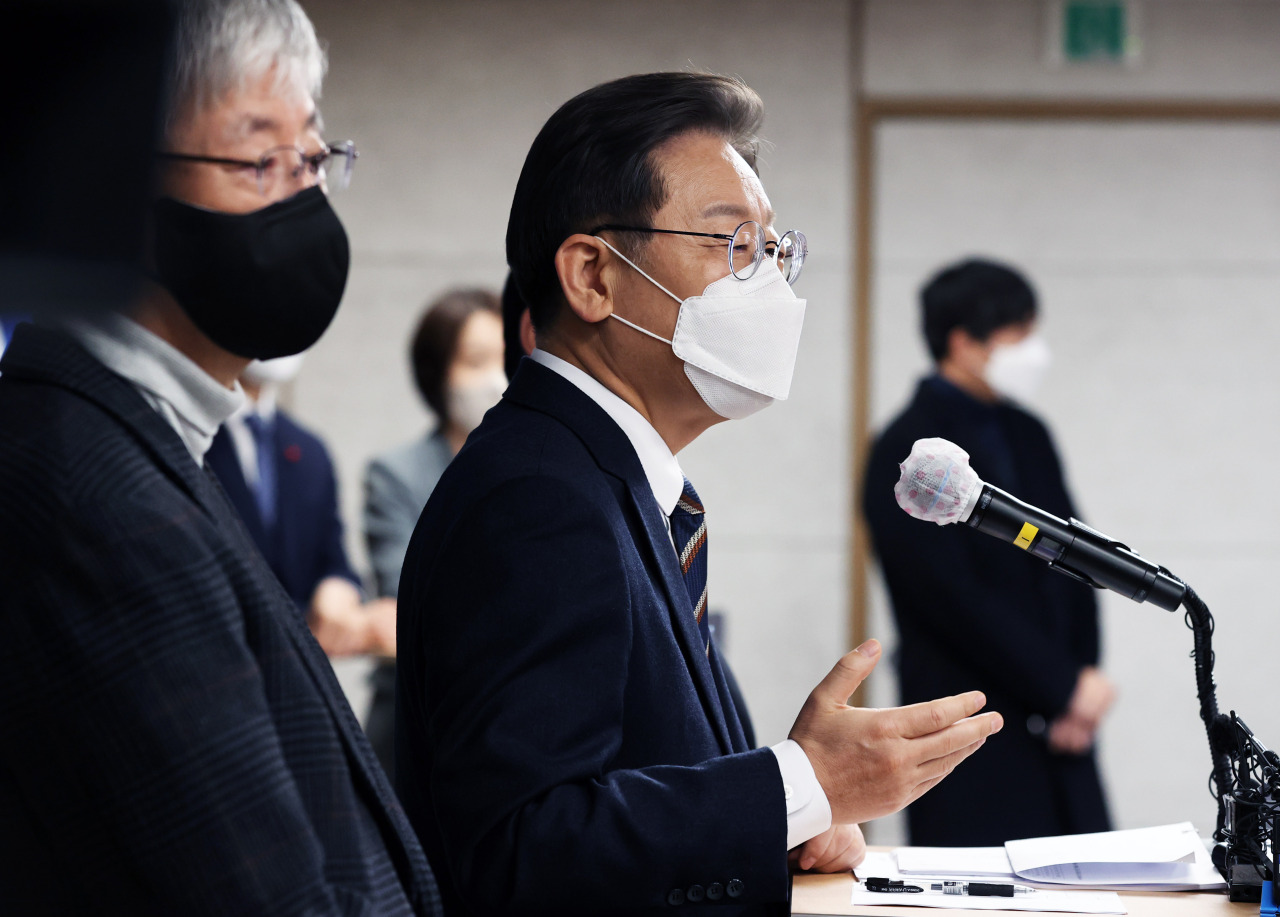 The latest is the third death reported among those related to allegations surrounding Lee, which has again raised calls for exhaustive investigations into Lee's suspected charges from the opposition bloc.

Police said Wednesday that the lawyer named Lee Byung-chul was found dead at a motel in Yancheon-gu, western Seoul, at around 8:40 p.m. Tuesday after his sister reported him missing to the police three days earlier.

The cause of his death was unknown as of press time, and an autopsy was underway at a nearby hospital. Media reports said there were no signs of violence or evidence of other crimes at the scene.

The lawyer is known as the first person to have provided a civic group with a recording file that contained information that another lawyer appointed as a defense attorney for Lee Jae-myung’s possible violation of the Public Official Election Act was provided 300 million won ($252,000) in cash and 2 billion won in stocks that could be sold three years later.

Lee Jae-myung stood trial until mid last year on charges of spreading false information during a TV debate in the runup to the 2018 gubernatorial election.

The alleged Public Official Election Act violation occurred in 2018 during a televised debate ahead of local elections where he stated that he had no part in his brother being admitted to a psychiatric ward.

He was suspected of unfairly using his authority to institutionalize his now-deceased brother against his will from April to August 2012. Lee Jae-myung was cleared of charges from a Supreme Court ruling in July 2020.

In the process of trial proceedings, the presidential nominee was alleged to have had someone else pay for his defense, as his assets shrank by only around 300 million won during the period.

The civic group that received the information from Lee Byung-chul filed a complaint with the prosecution in October, claiming the total legal fees for the proceedings would have cost Lee Jae-myung around 10 billion won.

Opposition parties called for a thorough investigation into Lee Byung-chul’s death and allegations surrounding Lee Jae-myung, as the latest case marks the third time that a key source related to suspicions on the presidential nominee has been found dead.

Since Lee announced his bid for presidency last year, two officials related to the Daejang-dong land development scandal have also been found dead.

Kim Moon-ki, head of the development division at the Seongnam Development Corp., was found dead on Dec. 21, days after Yoon Han-gi, head of the Pocheon Urban Corp. who was connected to the scandal, was found to have died by suicide on Dec. 10.

The main opposition People Power Party called Lee Jae-myung to reveal the truth on his part in the allegations, saying nobody else should be sacrificed before investigations are completed.

"I don’t know why such unfortunate events continue to happen," People Power Party Chairman Lee Jun-seok said in a Facebook post. "I don’t even have hopes for candidate Lee Jae-myung to say anything about him. Let’s keep watching and stay angered."

The Democratic Party of Korea denied all allegations made against Lee Jae-myung in regards to the death of Lee Byung-chul, saying its candidate has no relationship with the deceased lawyer by any means. The party asked the case not to be politicized and raised against its nominee without evidence.

"We ask any political attacks to be refrained from until exact details of the case are revealed," the Democratic Party of Korea’s press team said in a statement Wednesday. "We demand law enforcement to thoroughly and quickly investigate the case so that everything is made clear."