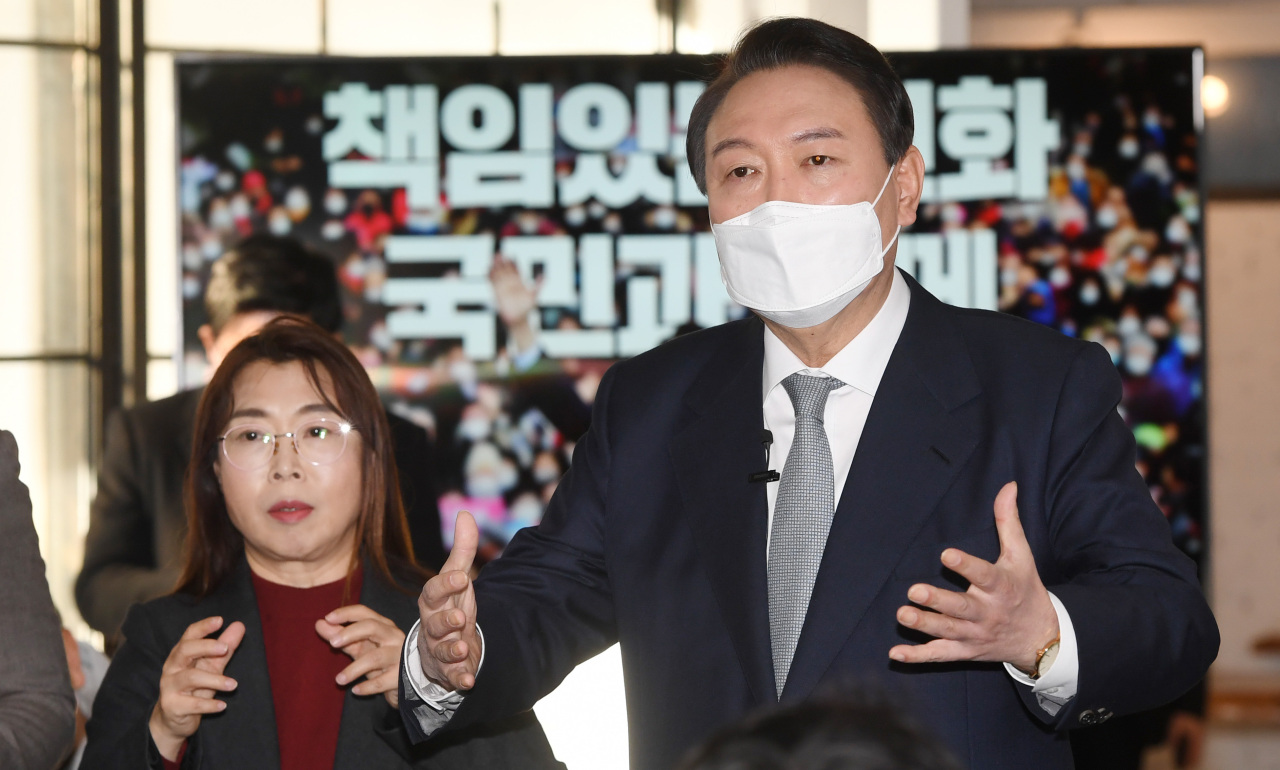 As North Korea fired a projectile identified as a ballistic missile into the East Sea earlier in the day, the conservative party candidate also highlighted the importance of international sanctions, and said the only way to avoid a critical nuclear attack from the North would be to carry out preemptive strikes.

“I will provide a monthly allowance of 1 million won ($840) for a year to all parents who give birth,” Yoon said at a New Year’s press conference in Seoul.

“Giving 1 million won to the parents will not directly make them have children. But to persuade people to have children, all kinds of efforts are needed by the government and individuals. The subsidy would be one of them,” Yoon said, adding that the scheme would not cost so much, as only about 260,000 babies are born here annually.

Yoon, who made the pledge to abolish the Ministry of Gender Equality and Family earlier, said he will establish new ministries to address social issues overall, such as the country’s low growth rate, low birthrate and deepening polarization in areas including education.

To handle social changes in the post-COVID-19 era, Yoon also said he would launch a special committee for the cause and adopt a system to provide financial aid to hospitals to strengthen their infrastructure to prevent situations such as a lack of hospital beds in case of emergencies.

For small-business owners suffering financial losses in the wake of the pandemic, Yoon also plans to introduce a new compensation measure for the government to share the burden on rent.

Criticizing the “income-led growth” strategy of the Moon Jae-in administration as “penetrating” market freedom, Yoon said he will “recover the vitality of the economy and the real estate market ruined by the incumbent government.”

Yoon also pledged to increase the supply of homes, and ease regulations to allow 80 percent loan-to-value financing for first-time buyers.

Overall, Yoon said he would aim to double the country’s potential growth rate, which currently stands at 2 percent.

On North Korea’s missile provocations, Yoon criticized the incumbent government and the ruling party candidate for demanding a lift of sanctions against the North.

“When a Mach 5 hypersonic missile is launched (targeting South Korea), and is equipped with nuclear weapons, it only takes less than 1 minute to cause mass destruction in the metropolitan areas,” Yoon said.

“That basically means it is impossible to intercept the missile. So the only way to handle the situation is with the Kill Chain preemptive strike system,” he said, referring to one of the country’s defense systems applied when Seoul faces an imminent threat.

“In the current situation, it is difficult to strategically prevent (the North Korea’s missile threats). But it is clear that we should take diplomatic actions to pressure North Korea and stop its nuclear advancement in all ways possible,” Yoon said.