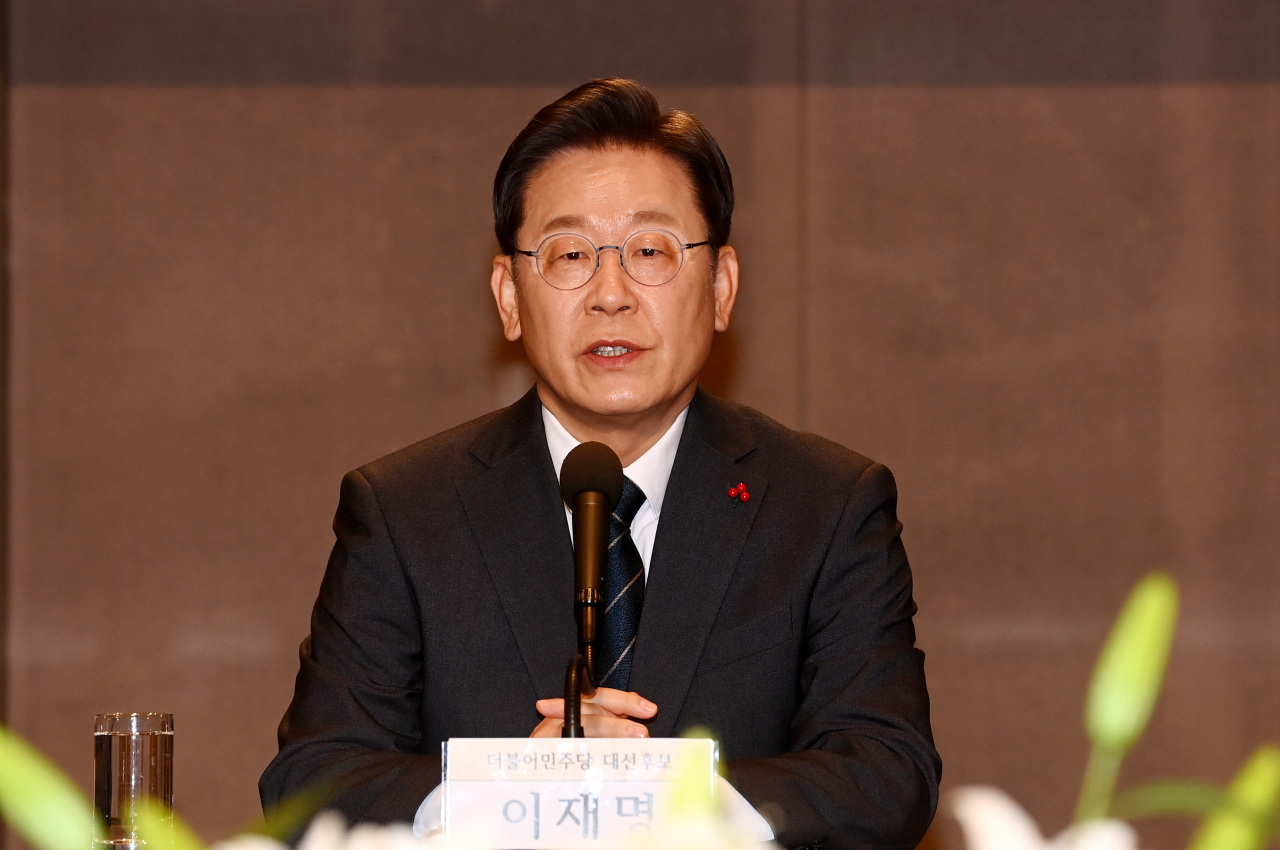 Lee Jae-myung, presidential nominee of the ruling Democratic Party of Korea, speaks Thursday during a press event hosted by the Korea News Editors` Association. (Joint Press Corps)
Presidential nominee Lee Jae-myung of the ruling Democratic Party of Korea voiced his opinion against joining the US-led diplomatic boycott of the upcoming Beijing Olympics, saying South Korea should prioritize its own interests in its unique diplomatic circumstances.

In a press event Thursday hosted by the Korea News Editors’ Association, Lee said South Korea should consider itself as a country that "encompasses" the interests of the US and China, which provides itself the power to make pragmatic choices, like distancing itself from the ongoing diplomatic boycott.

"I think it would be easier to think of us as a country that encompasses (US and China) rather than being pressured by them in the middle," Lee said.

"We could be making a wrong decision in being too conscious of the United States, and that wouldn’t be a good example of making a pragmatic decision based on national interest."

Lee's remarks are in line with President Moon Jae-in’s stance to not consider a diplomatic boycott of the Beijing Olympics led by the US, which announced it would not send an official delegation to the Olympics in February in protest of China’s human rights abuses.

Moon's decision is believed to have been made in a bid to maintain a balance in its relationship with the US and China. The US-led boycott has dimmed South Korea’s hopes of using the Olympics as a venue to hold talks with North Korea and possibly issue an end-of-war declaration.

Lee has emphasized South Korea’s active role in national defense, but reiterated his opposition Thursday to additional deployment of the US Terminal High Altitude Area Defense missiles on the peninsula.

He said he is ready to accommodate the missiles already stationed in the country but he would oppose any additional deployment of THAAD missiles, emphasizing the need for South Korea to take the lead in its own defense strategies.

South Korea has seen opposition to the US-deployed THAAD missiles for years since hosting the system in 2017. The deployment served as a hindrance to the diplomatic relationship between South Korea and China as well, causing trillions of won in losses, as China boycotted South Korea’s tourism industry.

"Basically at this point, I believe it is not necessary to deploy any more THAAD missiles here," Lee said. "We will review further if there are any new requests made, but considering many circumstances, I think it’s right to go negative on whether we need more."

In line with his vision, Lee called on South Korea to realize the transition to operational control as agreed on by South Korea and the US, as it "doesn’t make sense" that a country with such economic and military might lets another country make its defense decisions.

"It is very unusual and hard to witness any case in the world where an independent country leaves the power of military operations to another country," Lee said. "That is a core part of sovereignty, and it is already beyond common sense that the power was given to others in the first place."

Lee also called for more progress in finalizing the end-of-war declaration, as the matter was already agreed upon by leaders of Seoul and Pyongyang and that the war should be categorically ended in pursuit of a peaceful relationship on the Korean Peninsula.

South Korean Foreign Minister Chung Eui-yong said Wednesday that South Korea and the US have reached a de facto agreement on the draft of the declaration. The US did not directly comment on the progress, only reiterating its commitment to holding dialogue with North Korea.

"This problem of end-of-war declaration was already agreed upon twice by the leaders (of North Korea and South Korea)," the presidential nominee said. "For whatever reason it may be, the war should be declared as done in any form."

He said recovering trust and communications with North Korea is key in reaching the goal, adding his administration will ensure South Korea is not “humiliated” in responding to North Korea's provocative acts.

"We will say what’s needed to North Korea, making sure we don’t get criticized for being humiliated," he said.

In the event of a bombing of the joint liaison office, "we can’t implement any military actions, but we will clearly make our stance to make sure it doesn’t happen and respond with measures accordingly if faced with overly provocative actions."