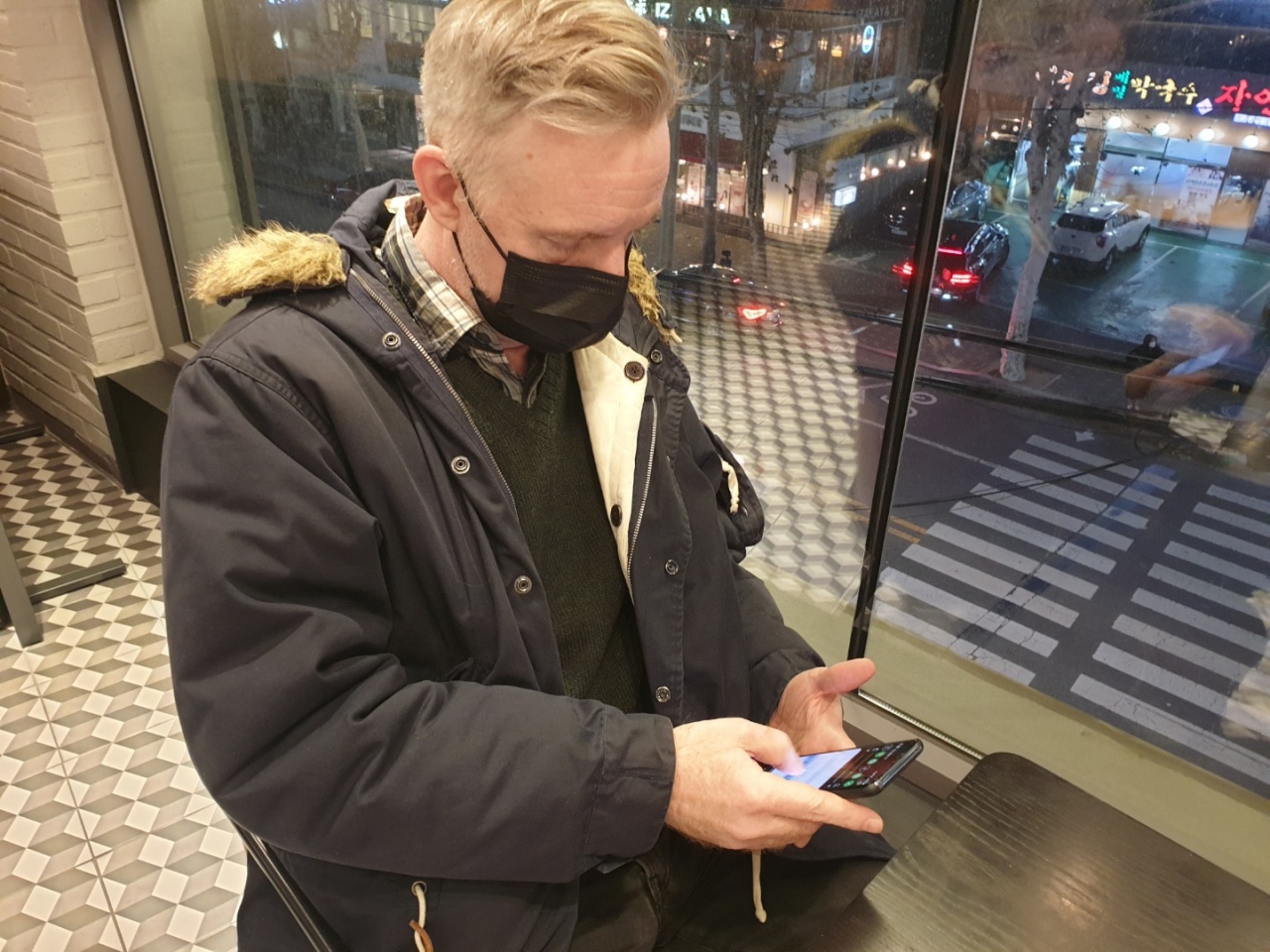 The online bank, operated by Viva Republica, had vowed to offer non-face-to-face banking services to foreign residents. If realized, it would be the first accessible online bank for the roughly 2 million non-Koreans residing in Korea.

Hiram’s hopes, however, soon turned into disappointment, when he attempted to open an account.

“Toss Bank still doesn’t allow account creation by non-Koreans. I read some articles a few months ago that the bank will try to enable this, but nothing happened,” said Piskitel, who has lived in Korea for more than a decade.

“The bank shouldn’t have advertised it, if it didn’t have the system to do it.”

Toss Bank’s plan was to develop a computerized system that checks the “residence card” issued to foreign nationals residing in Korea for 90 days or longer by the Korea Immigration Service, in order to serve their banking needs.

Under the envisioned scheme, once a foreign customer uploads a digital copy of his or her residence card on the fintech app Toss, the data will be automatically sent to the immigration office’s system for verification.

The move came after the Financial Services Commission proposed a bill in June to approve foreign nationals’ residence card as proof of identification when using online banking services. The financial authority and related government agencies have also established an online authentication system for financial firms to use. 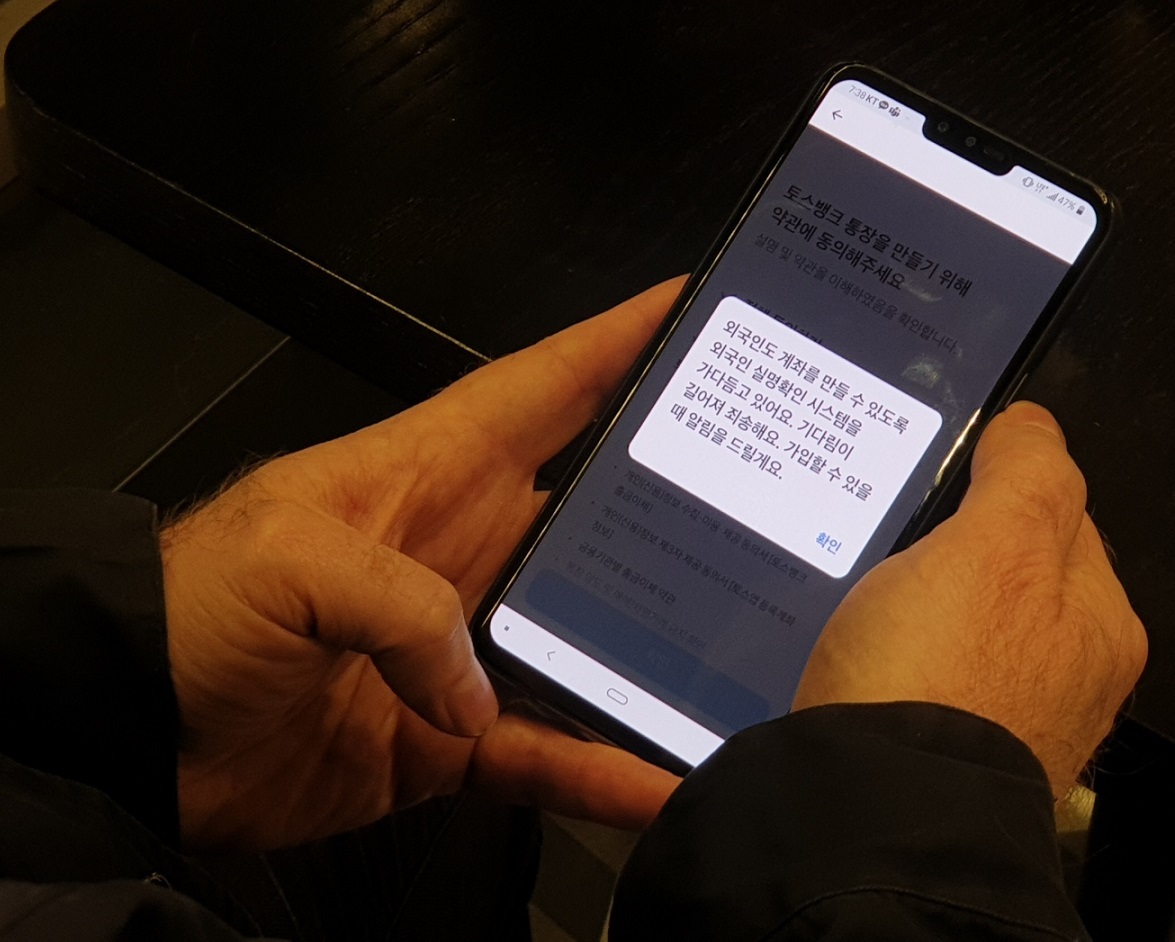 A picture of Toss Bank’s mobile application showing its account registration services for foreign nationals are not yet in operation. (Choi Jae-hee / The Korea Herald)
Then why’s the delay?

“We couldn’t launch banking services for foreigners right after Toss Bank’s launch in October as the FSC requested additional plans for security enhancement. We’re asked to clarify on the steps the company has taken to guard against financial fraud, especially money laundering,” a company spokesperson told The Korea Herald.

“Discussions are underway to implement related services as early as next year.”

In response to The Korea Herald’s inquiry, a FSC official said “Toss Bank has proposed its plan to develop an online system for screening foreigners’ residence card and talks are still ongoing about it.”

The delay in making things happen, despite the change in the law and digital infrastructure, is an example of what many say is the local financial authority and industry’s insensitivity to foreign consumers’ interests, despite the pandemic-driven contactless trend.

Toss Bank is at least trying. Kakao Bank and K bank, established in 2017 as Korea’s first banks operating without brick-and-mortar branches, don’t even have plans to serve foreign customers for the time being, bank officials told The Korea Herald.

“Online-only banks provide lower fees for international money transfers. It is too bad that non-Koreans can’t take advantage of their services when they send money to families in their home countries,” Piskitel said.

A 34-year-old English teacher from Canada working in Yongin, Gyeonggi Province, who wished to be identified only as Madison, said, “The COVID-19 outbreak triggered a contactless banking trend, but foreigners’ opportunities to untact digital finance are extremely limited even for those long-term residents.”

Madison, who has been living in Korea since December 2014, shared that Hana Bank, a traditional commercial bank, has allowed non-face-to-face account opening for foreign customers since October.

“(This) means an online system to check foreigners’ identification based on their residence card is already in operation. I’m wondering why this doesn’t happen for online lenders, especially when the nation’s banking market is experiencing a digital transition,” she added.

Since October, foreign residents can open an account with Hana Bank without visiting one of its offline branches. On the lender’s mobile application Hana EZ, they need to take a photo of their alien registration card and passport. The app was launched in 2019 to offer banking services in 16 different languages including English, Chinese and Japanese, according to the lender.

Among the nation’s five major commercial banks -- KB Kookmin, Shinhan, Woori, Hana and NH NongHyup -- Hana is the only that allows foreign nationals to open an account without visiting in person.

Market experts say concerns over money laundering or financial fraud may be the real reason behind the local market’s reluctance to include foreign residents as clients.

“There is no legal grounds for preventing foreigners’ access to contactless banking services, but the nation’s financial authorities seem to maintain a tight grip on online-only banks in terms of issuance of bank accounts to foreigners out of concern over financial fraud involving fake deposit bank accounts of foreign nationals,” said Lee Dae-gi, a senior researcher at the Korea Institute of Finance.

“Enhanced security measures will be a key to online banks’ launch of services targeting non-Koreans under the authority’s regulatory stance.”