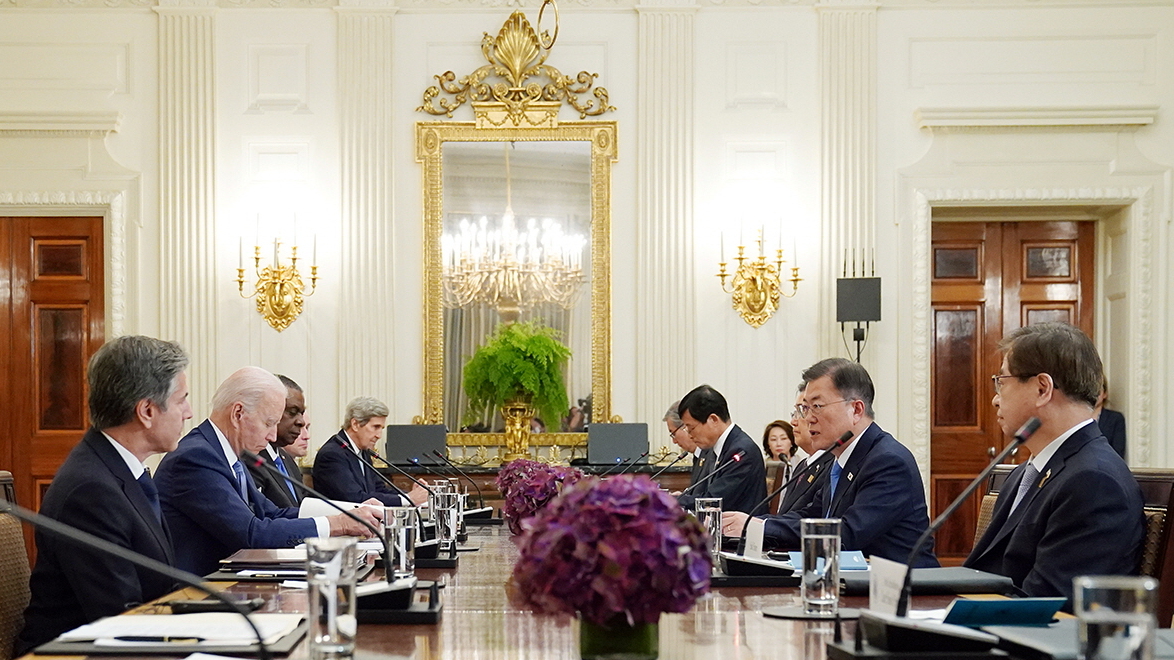 South Korean President Moon Jae-in holds talks with US President Joe Biden at the White House in Washington on May 21. (Cheong Wa Dae)

The Biden administration is skeptical of Seoul’s diplomatic initiative to utilize an end-of-war declaration as a standalone measure to reboot nuclear diplomacy with North Korea.

Essentially, Washington’s doubts of the Moon Jae-in administration’s proposal have grown as North Korea began to raise the costs for declaring an end to the Korean War.

The US interprets North Korea’s move as in line with its apathy toward resuming nuclear negotiations and the denuclearization process.

In light of its reservations, Washington’s coordination on an end-of-war declaration with South Korea constitutes alliance management and goodwill gestures to its key ally in the Indo-Pacific region, whose importance is growing in the intensifying US-China rivalry.

More importantly, an end-of-war declaration as a standalone measure can neither solve the fundamental cause of the standoff and mutual mistrust nor narrow the gaps between the US and North Korea.

North Korea will not likely return to the negotiation table without further concessions in view of the country’s recalibrated nuclear calculus and its long-term strategy to prepare for a prolonged stalemate with the US.

Biden administration’s skepticism
The Biden administration is skeptical, cautious and restrained about Seoul’s proposal to utilize the declaration as a standalone measure to revive nuclear negotiations, US experts said in an interview with The Korea Herald.

"I believe the Biden administration would be receptive to an end-of-war declaration if it is part of a package that also advances the process of denuclearization, but not as a stand-alone measure," said Robert Einhorn, a senior fellow at the Brookings Institution.

"It is skeptical that such a declaration, on its own, would bring the North Koreans to the negotiating table," Einhorn, who also served as the US State Department’s special adviser for nonproliferation and arms control, added.

Washington’s skepticism stems from North Korea’s recent move to attach undue and specific preconditions for declaring an end to the Korean War.

Pyongyang clarified its preconditions by issuing a series of statements under the name of senior officials immediately after South Korean President Moon Jae-in reproposed an end-of-war declaration during his UN speech in September.

Kim Yo-jong said the withdrawal of the US’ “inveterate hostile policy” and “unequal double standards” against North Korea’s military buildup, including its missile tests, should precede an end-of-war declaration.

North Korean leader Kim Jong-un in September publicly confirmed the preconditions are the country’s “invariable demand” in his policy speech, targeting the domestic and international audience.

“Such statements reinforce the Biden administration’s skepticism toward the declaration as a means of getting negotiations underway,” Einhorn said.

In addition to the public statement, Pyongyang is said to have proposed the suspension of the South Korea-US joint military drills and partial lifting of the UN sanctions on refined oil, minerals, medicine and other necessities as the preconditions for resuming dialogue on a declaration, according to South Korea’s National Intelligence Service.

North Korea: Raising bar for dialogue
The move is in line with Pyongyang’s tendency of gradually raising the bar for resuming working-level negotiations, further fanning doubts on North Korea’s willingness to engage in the denuclearization process.

In particular, North Korea’s demand to withdraw the US “hostile policy” has made Washington doubtful as to whether an end-of-war declaration would lead to denuclearization steps.

The hostile policy is an undefined concept that has been used by Pyongyang to demand a broad range of US concessions.

“An end-of-war declaration would not achieve progress toward denuclearization,” said Bruce Klingner, a senior research fellow at the Heritage Foundation. “North Korea habitually demands an end to US ‘hostile policy’ and upfront concessions as a precondition for returning to talks.”

But US experts underlined that Washington would be willing to discuss an end-of-war declaration as part of comprehensive negotiations toward the end goal of complete denuclearization and peacebuilding on the Korean Peninsula.

In Washington, there is also the view that North Korea is “less incentivized itself to offer up major concessions” in return for a declaration given that the option is “not necessarily a costly signal” to the country.

“As a result, there’s skepticism that a declaration can be offered up early in a sequenced denuclearization process with North Korea,” said Ankit Panda, a senior fellow at the Carnegie Endowment for International Peace.

“Rather, a declaration may be considered as a show of goodwill early in the course of implementing a denuclearization road map.”

US: Alliance management
Against that backdrop, experts assess that the Biden administration’s ongoing engagement in extensive discussions on a declaration with South Korea could be more of an alliance management approach and a goodwill gesture to its key Asian ally.

“Washington will continue to engage the ROK in a dialogue about the end-of-war declaration in order to show good faith with its ally, but the US skepticism about the idea seems unlikely to fade,” said Evans Revere, a nonresident senior fellow at the Brookings Institution. Revere also served as acting assistant secretary of state for East Asian and Pacific affairs.

Frank Aum, a senior expert on Northeast Asia at the US Institute of Peace, pointed out the Biden administration “wants to try as much as possible to accommodate its South Korean ally’s preference” despite its skepticism in an end-of-war declaration.

“Its support might be more alliance management than a sincere intent to make such a declaration in the near future.”

The Biden administration puts an emphasis on coordination on North Korea policy with key Asian allies in the Indo-Pacific, whose significance would continue to grow as China seeks to further expand its diplomatic, economic and political influence across the region.

The cornerstone of Biden’s North Korea policy addresses North Korea’s threats in close coordination with allies, while simultaneously pursuing diplomatic engagement with a calibrated, practical approach and strengthening the US extended deterrence.

Can declaration reboot faltering nuclear diplomacy?
In Washington, the common assessment is that an end-of-war declaration is not sufficient to bring North Korea back to negotiations.

Andrew Yeo, the SK-Korea Foundation chair in Korea studies at the Brookings Institution, brought into question whether an emphasis on a declaration is the best approach to restarting dialogue in light of North Korea’s unwillingness to return to negotiation without additional incentives being provided.

“The ball’s in Pyongyang’s court,” Yeo said, pointing to South Korea and the US’ diplomatic outreach. “Both governments have tried to reach out in public and private, but North Korea is not ready to play ball at the moment.”

Pyongyang has remained silent to Washington’s repeated overtures to meet and discuss any aspect of denuclearization and lasting peacebuilding “anywhere, anytime, without preconditions.”

Mark Tokola, vice president of the Korea Economic Institute of America, took note that “North Korea has demanded an end to ‘hostile policies,’ not an end to the Armistice’s formalities.”

Pyongyang would have a laundry list of demands: sanctions lifting, acceptance of North Korea as a nuclear power, withdrawal of US forces from South Korea, putting an end to the United Nations Command and a pledge to stop criticizing North Korea’s cyber activities and human rights record.

Therefore, North Korea would not see the value of a declaration as sole compensation to reengage in nuclear negotiations if additional concessions were not provided.

“North Korea has already asked for concessions as a price to be paid for its acceptance of an end-of-war declaration,” Tokola said. “That suggests that it sees the end-or-war declaration as something of value to South Korea and the United States rather than something it desires.”

But Tokola elucidated multifaceted aspects, including content, accompanying measures and format, will determine the utility of a declaration as a means to jump-start dormant diplomacy.

Aum of the US Institute of Peace suggested a declaration would work best if it can lead to facilitate the launch of a “new peace process that includes immediate confidence-building measures on both sides” based on close coordination among the parties.

“If it doesn’t include DPRK buy-in and is not accompanied by a process and immediate bilateral concessions, it would fizzle out quickly.”

Nonetheless, the question is raised on whether an end-of-war declaration could serve as a catalyst to resolve the fundamental causes of the yearslong stalemate and narrow widening gaps between the US and North Korea.

The chances of a breakthrough appear to be minuscule.

“The main issue of dispute is about the purpose and scope of proposed negotiations. The Biden administration seeks denuclearization; North Korea seeks acceptance of its nuclear program and demands the abandonment of perceived US hostility,” said Scott Snyder, director of the program on US-Korea policy at the Council on Foreign Relations.

-----
This is the last of a three-part series on Washington’s view of an end-of-war declaration. In the first part “Ending the Korean War: Risky gambit, with little chance of payoff,” the risks and opportunities surrounding a declaration are assessed. And in the second part "End-of-war declaration: What are US conditions, sequence, timing?," the process preferred by the Biden administration is examined. Twelve US-based experts participated in on-the-record interviews.
------