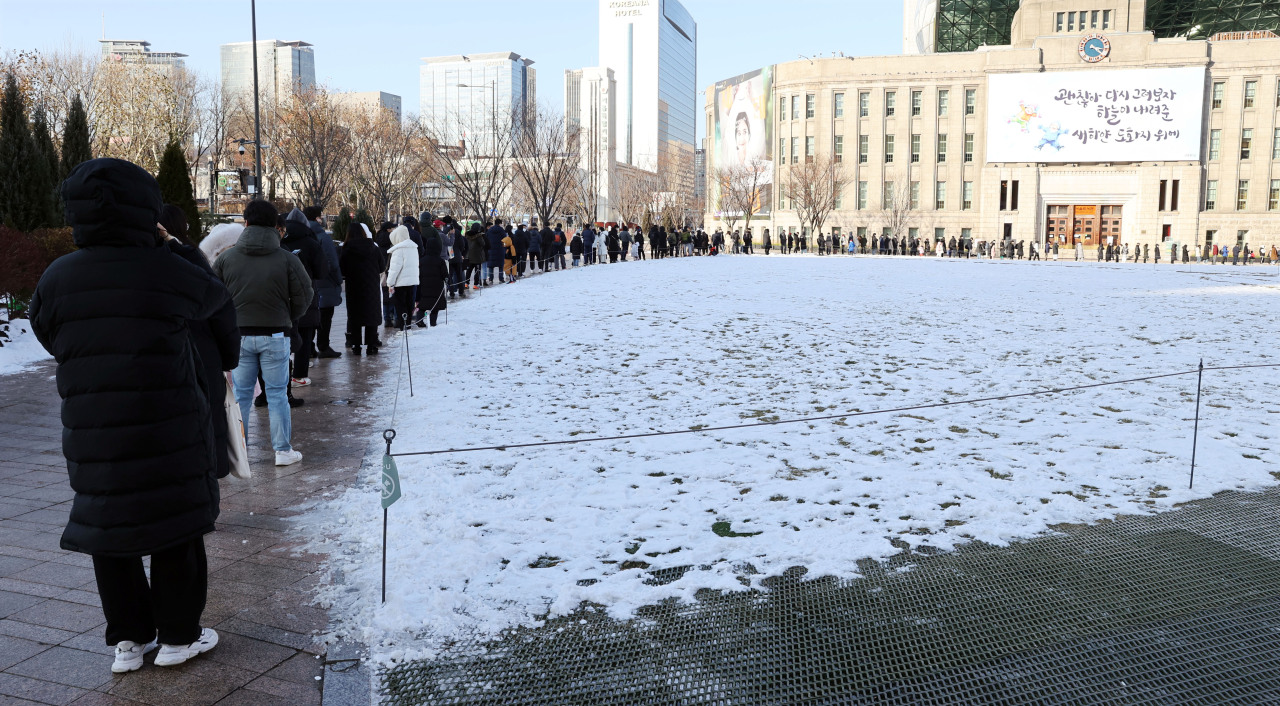 Test seekers form a long queue outside a COVID-19 testing clininc set up near Seoul City Hall on Sunday. (Yonhap)

Korea needs to reinforce its COVID-19 testing capacity if the country is to keep tabs on the omicron variant, Dr. Hong Kiho, a laboratory medicine professor at Severance Hospital in Seoul, said in a phone interview.

Hong called for enhancing testing, as clinics continue to deal with the surge propelled by the Nov. 1 return to normal. Some sites in the Seoul area have reported a wait time of an hour to several hours for a test.

The spike in testing demand is mainly attributable to the overall rise in cases, he said. A rise in patients means that many more people have been exposed and need to get tested.

Then there were wintertime respiratory issues, which can be difficult to distinguish from COVID-19 symptoms, driving people to seek testing. Adding to the demand was the COVID-19 pass system making PCR test results essential for people who aren’t fully vaccinated to enter public places.

With the imminent takeover of omicron, which is believed to be twice as transmissible as the dominant delta variant, Korea could face a further increase in demand for tests in the coming weeks, Hong warned.

While the government has said Korea is equipped to run up to 750,000 tests a day, last week the daily average number of tests was around 245,000.

In an effort to scale up testing, public health authorities said in a Monday press briefing they were considering bringing in automated systems to speed up the process on top of setting up more sites.

Hong said that automated PCR testing machines were costly and had to be imported, and although they could help individual hospitals, they couldn‘t become universal enough to raise testing.

Over the last two years, the government has not been investing in its testing capacities, he said, relying mostly on private health care institutions to augment staffing and infrastructure.

The laboratory medicine society had said in its Dec. 2 statement that the highest priority in face of the fast-approaching omicron variant was to ramp up its workforce -- health care workers performing nasal swabs on potential patients as well as lab specialists testing submitted samples.

“Tracking the variant’s spread would not be possible without a robust testing system,” the society said. “Korea’s omicron monitoring efforts are concentrated at the border. but our resources are unable to keep up with around 10,000 travelers coming into the country each day.”

To respond to the threat of variants, the testing landscape in Korea was “in dire need of a boost.”

Asked if Korea was sequencing and testing enough, Hong said that would “depend on what we aim for.”

During the pandemic’s early days, Korea’s strategy was to find as many presymptomatic and asymptomatic patients as possible through prompt, expansive testing. It was an instrumental component of the 3T -- test, trace and treat -- that had made its success an example to the world.

“If our aim is to minimize the number of cases that don’t go noticed by the surveillance system, then we’ve got to be testing more. If we are willing to accept the level of infections and deaths we are seeing now, then we’re keeping pace with demands more or less, although that is becoming increasingly harder.”

Hong said that at the end of the day, testing must be accompanied by measures to mitigate the spread.

An avalanche of cases and shortages of beds forced Korea to pause its 46-day experiment of almost no restrictions Saturday, with the return of nightly curfews on risky places and cap on private gatherings. To add to the woes, the count of confirmed omicron cases rose to 178, the latest update showed, less than three weeks since first cases were identified on Dec. 1.

“While it’s important to sift out cases through widespread testing, tests do not stop a virus’ spread. Without social distancing and other necessary measures, it will matter little how many tests we carry out, whether it’s delta or omicron that is dominating the outbreak,” he said.

“At this rate there might come a point where our hospitals become so crowded that counting how many omicron cases are among us might not mean much.”


Do the tests we have now work against omicron?

Saying that the highly accurate polymerase chain reaction or PCR tests would continue to remain the gold standard in COVID-19 diagnostics, Hong said that omicron cannot escape the PCR tests being used in Korea.

Even the “stealth” lineage of omicron would not affect the kinds that Korea is using, he said. The stealth omicron, authorities in the UK said, was harder to distinguish from other variants in PCR tests.

While whole-genome sequencing is used to confirm which variant has caused an infection, PCR tests can sometimes flag probable cases, which is also what Korea is doing.

But to prepare for a possible scenario of a new lineage emerging that is capable of dodging PCR tests, Korea was also developing a variant-specific PCR, Hong said.

Also, determining how widely a specific variant is circulating -- while imperative to disease control and research -- would not be necessary at hospitals, he said, unless the clinical course of the disease changes significantly enough depending on which variant a patient has.

The consensus among laboratory medicine specialists is that rapid antigen tests are too unreliable to be considered a standalone diagnostic tool, omicron or not.

“The rapid kinds are too prone to give false negatives. At best they can only be complementary to the PCR tests,” he said, adding, omicron, with its many mutations, would compromise the rapid test’s ability to discriminate an infection even further.

“There was a report from late November that passengers to the Netherlands who returned negative results in rapid antigen tests were later found to have been infected with omicron,” he said. 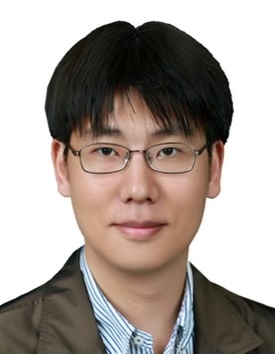 Dr. Hong Kiho, a laboratory medicine professor at Severance Hospital
Hong, a representative of the Korean Society for Laboratory Medicine’s COVID-19 taskforce, has been in several meetings with the government over monitoring and diagnostics against the original virus and its variants. He was also among the experts developing Korea’s very first test kits against COVID-19 using the prototypes provided by the World Health Organization back in January last year.