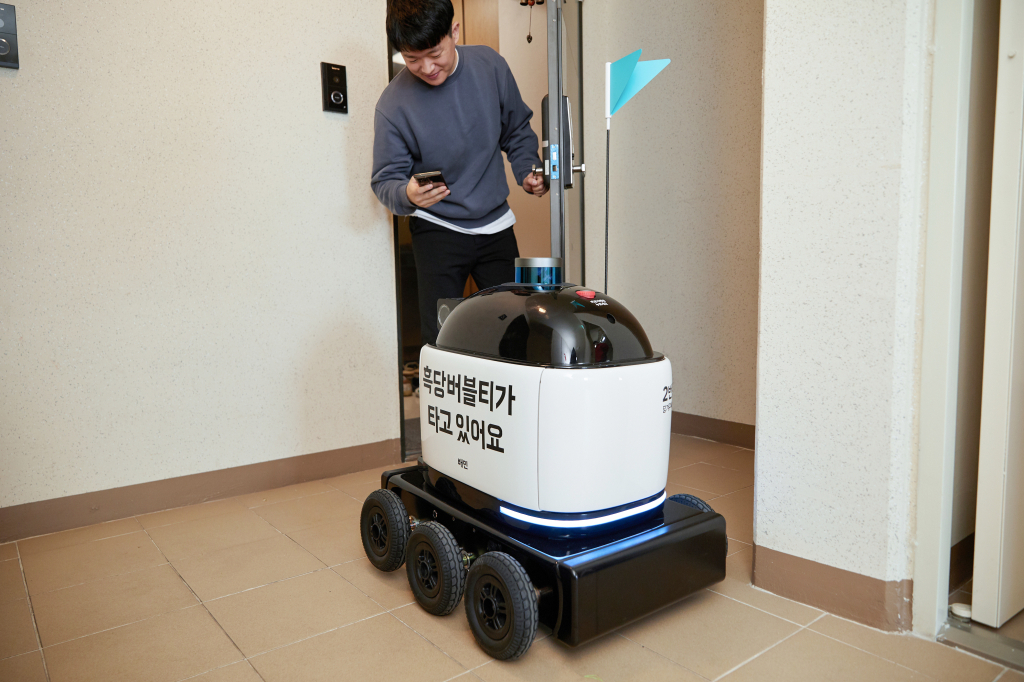 Named “Delidrive,” Baemin’s autonomous driving robot is the first of its kind in the world, according to the app operator Woowa Brothers.

Prior to the official launch of Delidrive, Baemin had operated a similar robot food delivery service since August last year. The robot delivery service used to pick up food from restaurants and deliver it to the first floor of the apartment building, which meant customers had to leave their house to get their food.

The company assigned QR codes to 1,000 households in the apartment complex, allowing the delivery robot to recognize which door it should drive toward and moves according to a preset route.

Baemin’s Delidrive is also connected to the apartment’s entrance system and elevator so it can open the front door on the first floor and get on the elevator. Once the robot arrives at the door, it makes a phone call to the customer and sends an alarm on the app.

The company has tested more than 200 delivery situations in about a month since the beginning of November. It took an average of 20 minutes to complete the delivery after the order was placed. So far, Delidrive has not gotten into any accidents or collided with pedestrians, Baemin said.

“We will continue to develop technology and improve service quality so the door-to-door robot delivery service can be expanded to more apartment complexes and office buildings.”

Meanwhile, a new study showed how robots in the workplace and demands for human labor are correlated.

“We see a strong negative relationship between exposure to robots and labor demand changes for the manufacturing sector and routine occupations, while we do not find a statistically significant effect on the labor demand for service sectors and non-routine occupations,” said Kim Hye-jin, a researcher at the Economic Research Institute of the Bank of Korea.

The researcher added that more robots will take place of human workers in the field of manufacturing and simple labor as related technologies continue to develop in the future.

Although the changes brought by introducing robots in the workplace are inevitable, Kim said more education and training are needed to minimize the side effects of people losing jobs.

South Korea had the second-largest robot density in the world as of 2019 with 774 industrial robots per 10,000 workers, research showed.