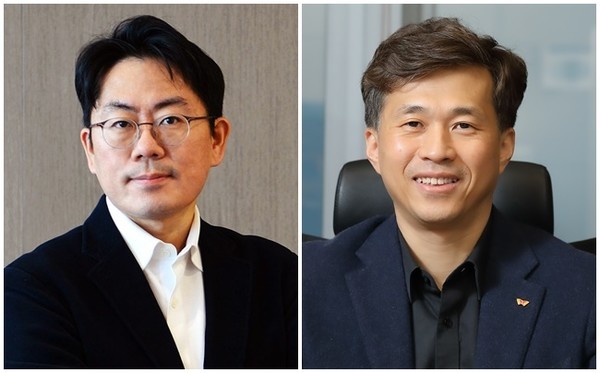 SK hynix promoted two executives to presidents -- Noh Jong-won (left), chief marketing officer, and Kwak Noh-jung, chief safety product and production officer.
SK hynix, the chip-making affiliate of SK Group, said Thursday that it has set up a new business unit solely dedicated to the US market where the memory chip giant has made a renewed push to secure a firm footing and expand partnership with local tech firms.

The new unit, called American Business Team, is one of the three new units established under the direct influence of CEO Lee Seok-hee, as part of the company’s year-end executive reshuffle and organizational overhaul. The other two units will be in charge of safety control and pursuit of new growth engine businesses, respectively.

The new US business unit, under the so-called “Inside America” strategy, aims to enhance the firm’s competitiveness in NAND memory business in the all-important US market amid a global chip shortage and secure more US tech firms as its new clients. A separate research team is also being set up under the unit.

According to market tracker TransForce, SK hynix is currently the No. 3 player in NAND sales with a 13.5 percent market share in the third quarter this year. With its planned acquisition of Intel’s NAND business being completed in the coming weeks, its market share could surge to some 20 percent, rising to the No. 2 in the market only after Samsung, which dominates more than 30 percent of the market.