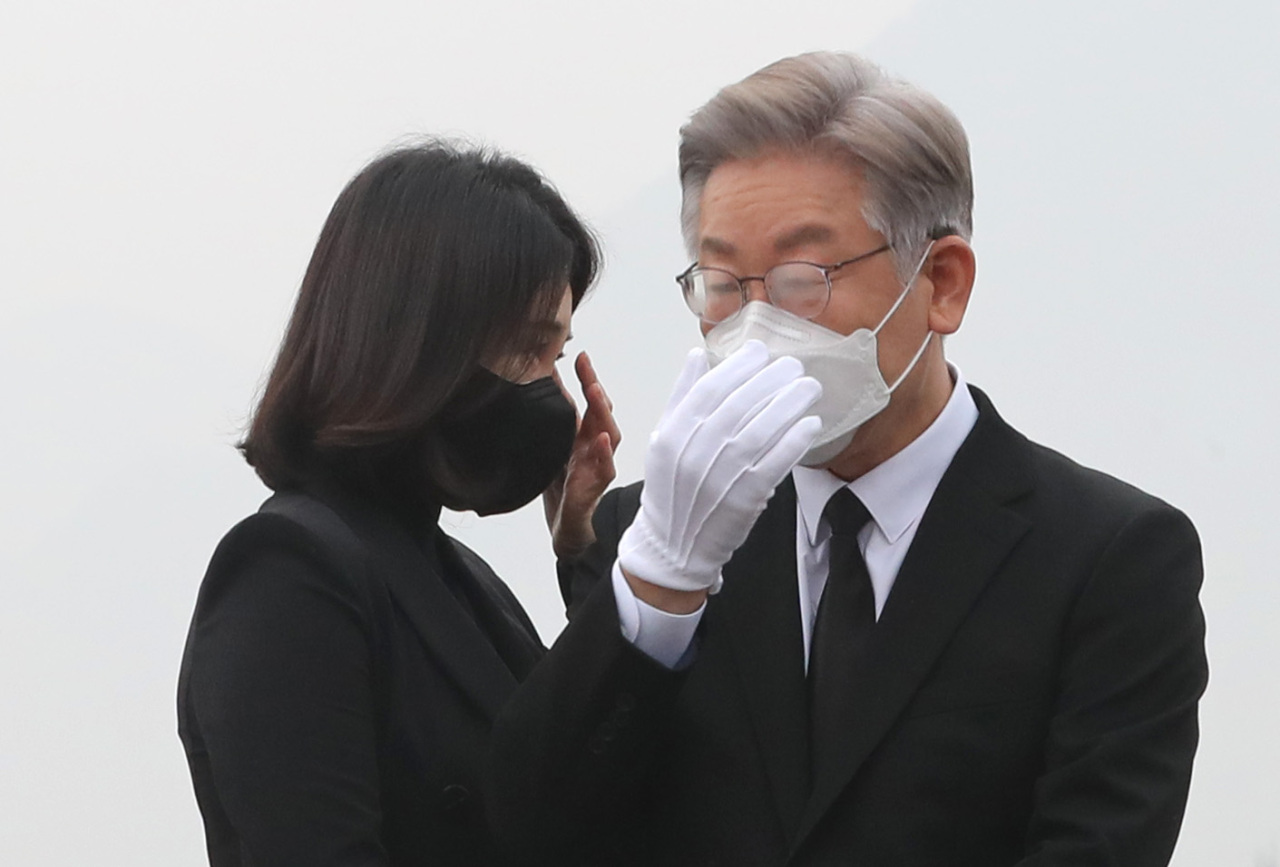 On Wednesday, he apologized on behalf of his party for failing to empathize with the “painful hearts of the people,” and got down on his knees, saying he will apologize at every opportunity and bring about changes in the party.

A day earlier, Lee apologized for using abusive language against his sister-in-law and the allegations over his role in the Daejang-dong property speculation scandal.

Lee also agreed to undergo a special prosecution investigation related to the property speculation and withdrew plans for a national disaster support fund.

Critics say his dramatic about-face is aimed at seeking a rebound in approval ratings with about 100 days left before the election.

Although a recent Gallup poll showed Lee’s approval ratings rising back on par with main opposition People Power Party’s candidate, Yoon Seok-youl, he was losing to Yoon by a wide gap early this month after Yoon won the party primary.

Lee, who is mired in various allegations, scandals and rumors, also has low support from female and young voters.

Ryu Hong-chae, a professor at Kyonggi University’s Graduate School of Politics & Policy, said his humble turnaround can act as a catalyst for a recovery in approval ratings to offset his negative image.

“He has been evaluated as being too radical, dogmatic and inconsiderate, and some even say he might become dictatorial when elected,” Ryu said.

“He probably wanted to show the other side of him,” he said, referring to when Lee had persuaded and reached compromises with officials and residents to push ahead with numerous drastic measures as mayor of Seongnam and Gyeonggi Province in the past.

Lee is also seeking to appeal to voters emotionally, having shed tears on separate occasions for three straight days.

Last Friday, Lee was pictured sniffling as he bought taro from an old man selling vegetables at a traditional market stand in Nonsan, South Chungcheong Province. Lee said the exchange reminded him of his late mother.

The next day, he and his wife, Kim Hye-gyeong, were seen wiping away tears while visiting a graveyard of fallen soldiers in Yeonpyeongdo. The following day, he choked up at a committee meeting with senior officials when retelling a story of how a person had begged him to “Please let poor people live.”

“Before Roh was nominated as a presidential candidate, his image was a fighter, very strong and sticking to principles,” he said.

Roh, a former human rights lawyer, made headlines in 1988 when he grilled top officials from the previous administration at a special parliamentary hearing on graft. During the questioning, he threw his name plaque at the officials in an emotional outburst.

“Roh’s strong image turned soft after being nominated as a presidential candidate. He shed tears and showed his humane side when talking about his wife. Through this, he gained a lot of support from female voters,” he said.

Back in 2002, a tearful Roh appeared in a TV advertisement as he recalled his turbulent life. Experts called it the “politics of tears,” and credited the two-minute TV commercial for bringing him victory.

“Lee has consistently said, ‘I am right and the opponent is wrong.’ If he suddenly turns to ‘I am wrong,’ his sincerity can be suspected,” Lee said.

“He needs to judge how convincingly it is delivered to voters,” he said.