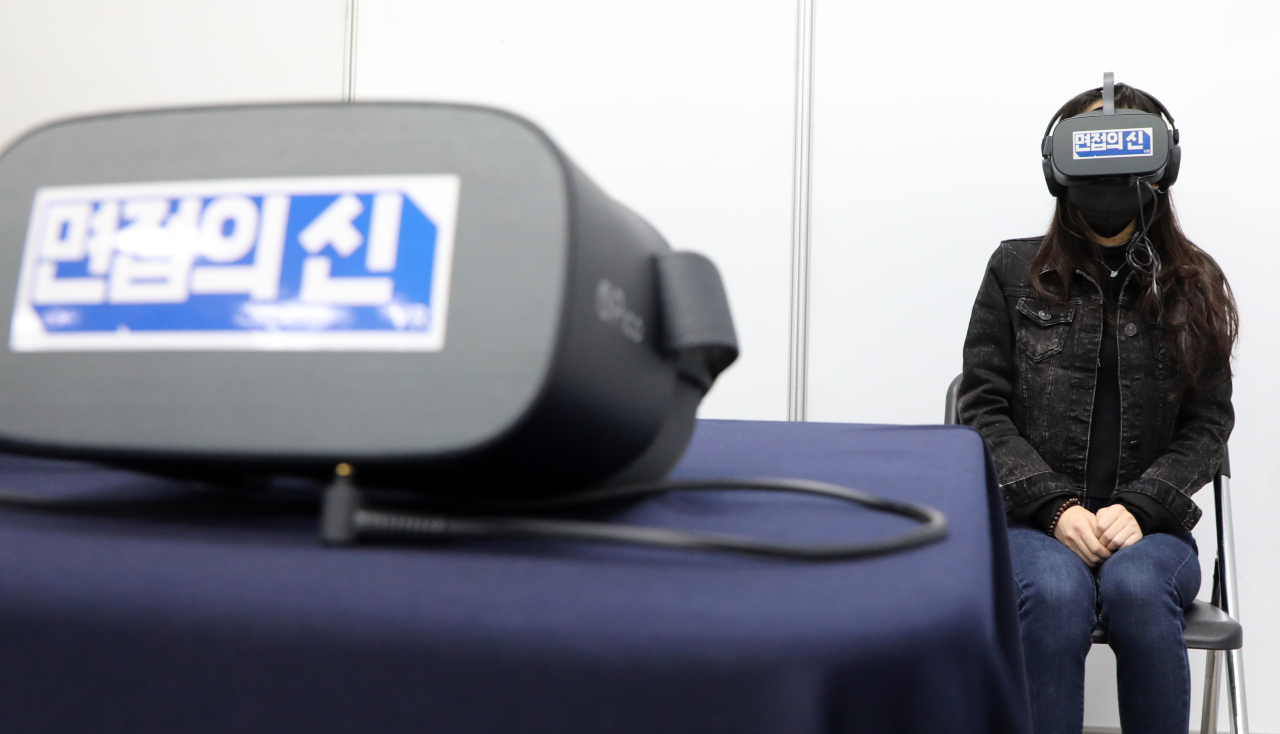 A participant in a job fair in Seoul experiences an experimental interview via virtual reality devices earlier this month. (Yonhap)
SEJONG -- Nonregular workers’ pay has risen quite slowly compared to regular workers over the past four years, government data shows. 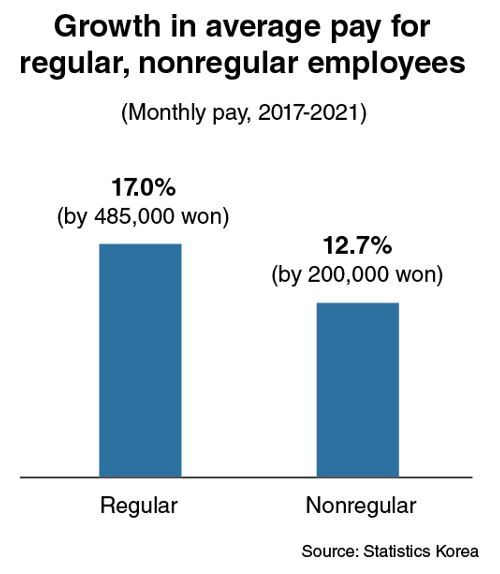 (Graphic by Kim Sun-young/The Korea Herald)
In Korea, nonregular workers refer to temporary workers, part-timers and others in an underemployed status.

Data showed that the wage gap has continued to widen in recent years, while the proportion of workers in nonregular jobs increased by 5.5 percentage points during the 2017-2021 period.

Further, 88.8 percent of regular workers were national pension policyholders as of this year, while the portion of pension subscribers among nonregular workers stayed at 38.4 percent.

On top of the widening wage disparity and relatively weak social benefits for nonregular jobs, the number and proportion of nonregular employees is also growing.

The number of nonregular employees increased from 6.57 million in 2017 to 8.06 million in 2021, with their portion of total salaried workers climbing from 32.9 percent to 38.4 percent.

Almost half of female workers, or 47.4 percent, were in nonregular positions according to data from this year. It was the highest proportion since South Korea started compiling the data in 2003.

The portion of nonregular jobs among female workers ranged between 39.9 percent and 41.1 percent during the previous Park Geun-hye administration.

The situation was similar for men: The portion of nonregular jobs increased from 26.3 percent to 31 percent in just four years.

“Small businesses have been hiring people in their 20s on nonregular position contracts in the wake of drastic hikes in the statutory minimum wage in 2018 and 2019,” a labor researcher in Seoul said.

He also said that the government has aggressively increased the number of nonregular workers among those in their 60s at state-funded agencies, with them usually working as cleaners.

This sort of policy implementation could suggest that the huge allocation of supplementary budget for job creation during under the Moon Jae-in administration has only created unstable, low-paid jobs for both seniors and young people.

This might have contributed to the overall employment rate. But the nation’s “de facto” jobless rate -- the portion of unemployed or underemployed -- has remained above 10 percent during President Moon’s term since May 2017.

Though the de facto jobless rate has inched down compared to earlier on in the pandemic, the figure remains relatively high at 11.7 percent, according to the Supplementary Index III for Employment calculated by Statistics Korea.

This indicates that 3.54 million people were unemployed or underemployed in October 2021.