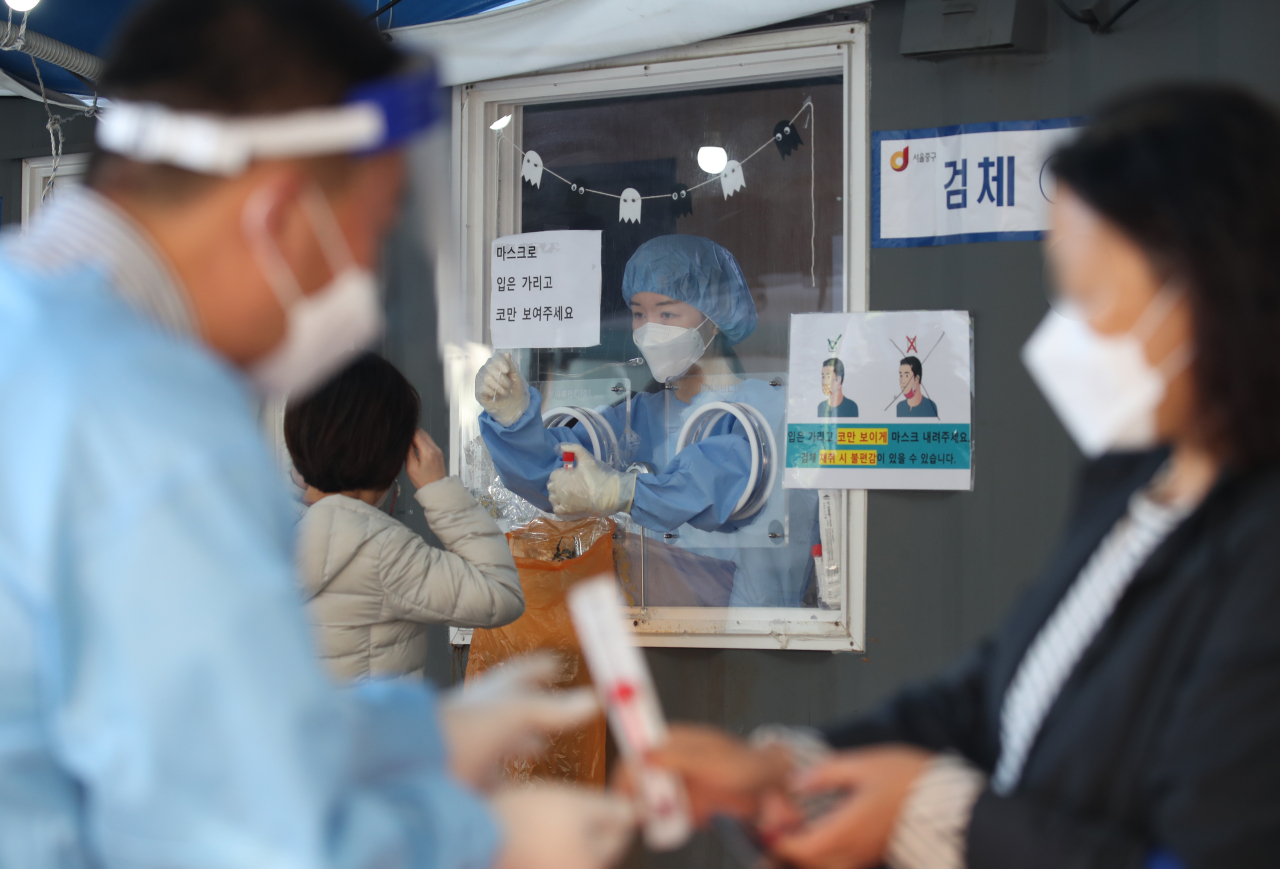 A health care worker is pictured taking a nasal swab from a woman at a testing center in central Seoul on Sunday. (Yonhap)

A Seoul man in his 60s who was being treated at home for COVID-19 died on Thursday before he could receive hospital care, raising concerns over potential safety problems with the at-home program.

According to the Ministry of Health and Welfare announcements, the 68-year-old patient, who was not vaccinated, died while under home isolation Thursday, just a day after testing positive. He is the first known patient to die at home since the eligibility criteria were expanded last month.

Most Koreans with COVID-19 now recover at home, instead of in hospitals or other isolation facilities. Since Sept. 25, home care has been the default for patients under 70 years of age if they have mild or no symptoms at the time of diagnosis, and if they are free of risk factors such as chronic lung disease, kidney failure or an organ transplant history.

Patients 70 or older can also opt for home care if they have access to a support person or live-in caretaker who is fully vaccinated.

The ministry said in a text response to press inquiries that the deceased patient had no preexisting health conditions and showed no symptoms on Wednesday, the day he was diagnosed. He was consequently put in home isolation, but developed symptoms that worsened rapidly overnight, it said.

The ministry added that the patient “had insisted on staying home despite a medical practitioner in charge advising facility care because of his age.”

Dr. Eom Joong-sik, an infectious disease specialist at Gachon University Medical Center in Incheon, said that with COVID-19, sometimes the true level of respiratory compromise is belied by an absence of symptoms or only mild symptoms. This was “probably the case for the Seoul patient who died Thursday,” he said.

At medical facilities, chest imaging and other tests can be done to assess a patient’s condition more accurately, while patients treated at home report their own symptoms remotely.

“One of the puzzling characteristics of COVID-19 is that a patient can have low oxygen levels and pneumonia without experiencing breathing difficulty or other outward symptoms,” he said.

Known as “silent hypoxia” or “silent pneumonia,” the stealthily deteriorating condition was more commonly seen in patients in their 50s and older, he said, which is why at-home care should be limited to younger patients without risk factors.

The current age cutoff, 70, is the result of a compromise between the Ministry of Health and Welfare and outside experts advising public officials on stay-at-home care protocols, he said. Eom, who was one of the advisers, said, “The ministry proposed to expand at-home care to older adults in their 70s and up, while the health professionals pushed to lower it.”

“Having patients stay at home is not going to be as safe as at a hospital,” he said. “Patients and their caregivers should be informed thoroughly of the signs and symptoms to look out for, and provided with the routes for seeking help.”

Eom added that patients should be able to seek help directly through 119 rather than district officials.

Lee Ki-il, a senior health official, said in a televised briefing held Friday, that currently, instead of 119, patients are instructed to contact the numbers of district officials or health care personnel.

The chief of disaster response division within Seoul’s emergency services, Suh Soon-tak, said in the same briefing that first responders who arrived at the scene were “not aware the patient had COVID-19 and called for additional help, resulting in about half an hour’s delay.”

According to the ministry, the patient’s wife called 119 Thursday at 6:51 a.m. and although first responders arrived within less than 15 minutes, they had to wait until 7:30 a.m. for a COVID-19 emergency response team and special ambulance to arrive.

Soon he went into cardiac arrest and received cardiopulmonary resuscitation while he was being transported. He died at 8:30 a.m. -- about 25 minutes after he got to the hospital.

In a phone call Friday, a Seoul official admitted that the emergency response system is still “being fine-tuned to cope with COVID-19 patients having a sudden deterioration.”

On the delayed response, the official said that it took first responders about 20 minutes to “wrap” an ambulance so that it would be safe to carry an infected patient. There are about 20 ambulances in the city equipped to transport patients with COVID-19, he said, just four of which are negative-pressured.

The official also said although the patient in question was located in Seoul’s central-western district of Seodaemun, he had to travel all the way to Seoul National University Hospital in Jongno, about 8 kilometers away. No other hospital nearby had an available negative-pressure bed.

The official said because 119 responders may not be able to respond to a COVID-19 case immediately, in the event of an emergency, patients at home were told to reach out to the district’s official or a nurse assigned to them.

“You should be able to reach the phone numbers that were given to you by the district public health office,” he said. “If you decide to call 119, you must inform the operator that you have COVID-19.”

In light of the recent fatality, the city planned on building an integrated system of sharing patient information with emergency services, he added.

Infectious disease professor Dr. Kim Woo-joo of Korea University said since home recovery was something Korea was trying for the first time, it should “begin with low-risk groups before the system stabilizes and the scope of eligibility can widen.”

Patients’ vaccination status, regardless of their age, is currently not among the criteria for at-home care eligibility, which raises concerns, he said, arguing that under the state of things, unvaccinated 50- to 60-somethings and anyone older “should not qualify for home isolation.”

Statistics from prior months show that about 17 percent of patients who initially had mild or even no symptoms have ended up being hospitalized.

In July and August, 12,037 of the 67,613 patients admitted to nonhospital facilities for patients with mild or asymptomatic COVID-19 -- called “community treatment centers” -- had to be moved to hospitals after developing more severe symptoms.

Kim said that presumably, a similar proportion of patients placed at home are expected to become sick enough to require hospital treatment, and that the system should be prepared to respond to patients who need to be taken to a hospital.

While the figure is constantly shifting, based on the trends in the past month, there are about 1,000 to 2,000 patients with active cases recovering at home at a given time in Seoul. By Thursday midnight’s count, there were 1,068 patients at home citywide.