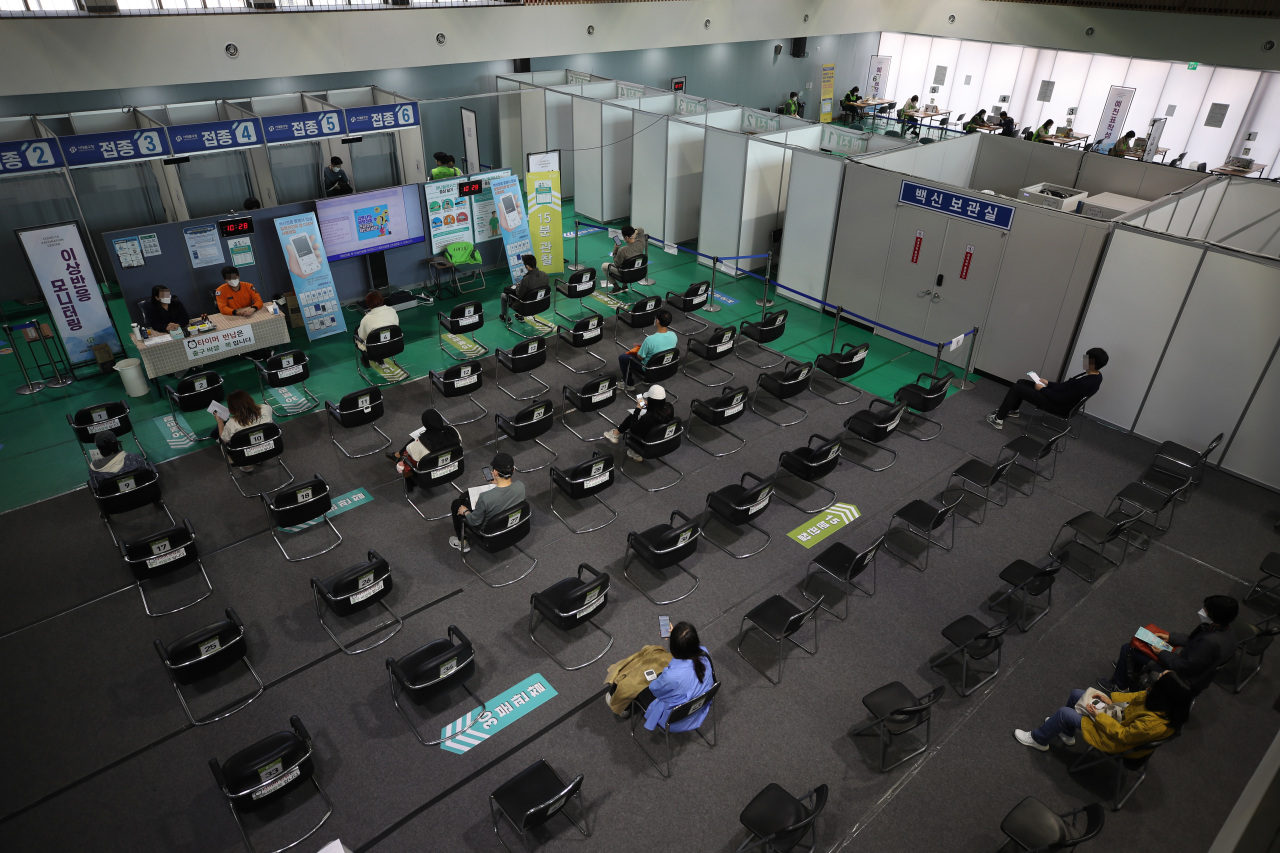 People wait to monitor for side effects after getting vaccinated at an inoculation center in Seoul on Friday. (Yonhap)
Easing quarantine measures should be centered around fully vaccinated people in the initial stages of returning to normalcy, Prime Minister Kim Boo-kyum said Friday.

“While expanding the scope of recovery for daily life, we will try to find a balancing point that can stably manage quarantine,” Kim said in the meeting of the government-private sector committee to draft a road map to normalcy.

“Vaccination greatly impacts infection prevention and reduces severity and mortality, so it is inevitable to start going back to normalcy (centered around fully vaccinated people) while lowering the risk of spreading infection.”

The government previously announced that it will reveal the first draft of the road map to a return to normal life on Monday, after which it will hold a public hearing to receive feedback.

Regarding the possible introduction of a “vaccine pass,” the prime minister vowed to take everyone into account.

“If there is a need to bring in the system of a vaccine pass or verification of negative test results, it should be designed and operated with sufficient consideration for the situation of unvaccinated people or those who are unable to be vaccinated due to health reasons,” he said.

Pointing out that the country’s rate of people fully vaccinated could reach 70 percent as early as Saturday, the prime minister stressed the importance of getting back to normalcy in a cautious manner.

“We cannot rush things. Like the COVID-19 pandemic, returning to normalcy is a path that we have never taken,” Kim said.

“From the experiences of many foreign countries, it is clear that the step-by-step transition to daily life is a very challenging task. We have to understand it as a moment of crisis with hope and prepare for it carefully rather than being unconditionally relieved.”

The United Kingdom and Singapore turned to “living with the virus” as they achieved certain vaccination rates. But both countries have seen their numbers of daily infection cases spike in recent days.

According to the Korea Disease Control and Prevention Agency, 35 million people, or 68.2 percent of the total population, had fully completed vaccination as of Thursday. For people aged 18 or over, the vaccination rate recorded 79.3 percent.

In order to crack the government’s goal of a 70 percent vaccination rate, about 940,000 more people will need to receive their second shots. Around 400,000 people got their second jabs on Thursday alone.

Although more details about the government’s road map to normalcy will be released next week, health authorities on Friday hinted at the measures to be kept or lifted.

“Basic quarantine measures such as wearing a mask will be maintained. In the first shifting phase in early November, we will first consider removing the limit on operating hours for facilities such as restaurants and cafes,” Lee Ki-il, a senior official at the Ministry of Health and Welfare, said in Friday’s briefing.

“There also have been proposals for high-risk facilities to temporarily introduce a system of verification for complete vaccination or negative test results to prevent infection.”

Meanwhile, health authorities are expected to announce the plan to administer booster shots for those who have received Moderna or Janssen vaccines next week, following the United States Food and Drug Administration’s decision to authorize booster jabs for the two vaccines.

A booster shot indicates an additional dose of a vaccine to boost the immune system after a certain period has passed since the initial inoculation series.

The FDA on Wednesday gave emergency authorization to administer a single booster shot of the Moderna vaccine for individuals who received their second vaccination at least six months ago. For those who were inoculated with the single-dose Janssen vaccine, the FDA said a booster shot should take place at least two months after the initial vaccination.

The Korean government began using Pfizer’s vaccines to administer booster shots for health workers and people at high-risk of being exposed to the virus on Oct. 12.

On Friday, the country reported 1,440 new cases of the coronavirus from the previous day, marking the first time for the daily caseload from Thursday to record below 1,500 since the third week of July, when the fourth and current virus wave was in its beginning phase.