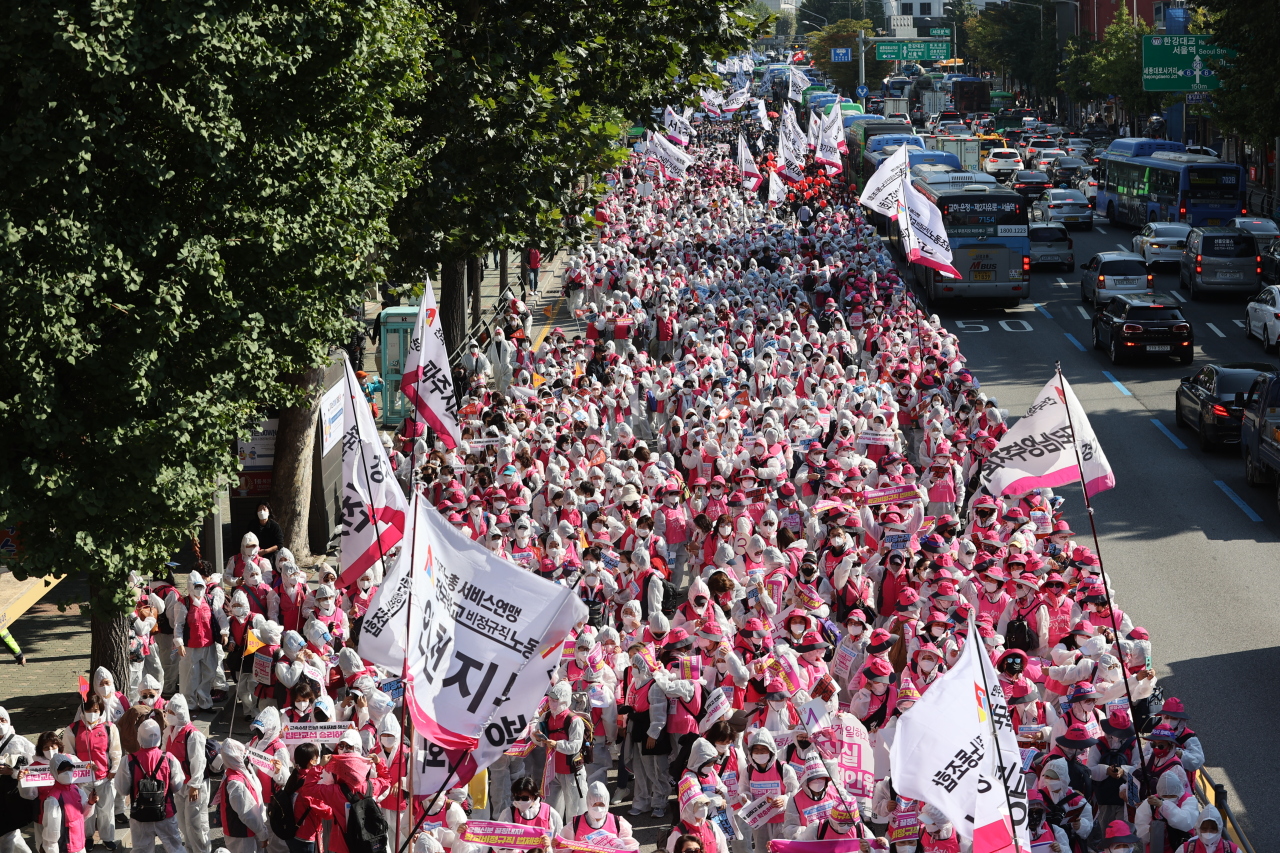 The labor group announced earlier in the day that it would move forward with its plan to hold rallies in 14 areas throughout the country to demand better treatment of irregular workers, unionization rights for all laborers and stronger action from the government on employment security.

The union did not announce a Seoul location until the last moment in fear of preventive measures by the police, later announcing it would hold the rally in Seodaemun-gu, western Seoul, starting at 2 p.m.

Police warned they would sternly respond to the rally, dispatching personnel and vehicles around the city prior to the union’s announcement.

In response to the KCTU’s plan, police installed walls of buses along major streets in Seoul while running checkpoints to stop protesters from entering major urban streets en masse. Some physical confrontation was expected, as police emphasized upholding virus control measures that ban most mass rallies.

All rallies other than single-person ones are prohibited under Level 4 rules, and Level 3 rules only allow gatherings of up to 49 people. This means much of the KCTU’s plan for Wednesday directly violated Korea’s virus rules.

The KCTU had emphasized it would strictly abide by its own virus control measures in carrying out the rally.

The labor group said it would use the nationwide walkout as an opportunity to make its voice heard ahead of next year’s presidential election. The walkout is also being held to protest the arrest of KCTU leader Yang Kyung-soo on Sept. 2.

The conglomerate of labor unions said around 500,000 of its 1.1 million members would participate in the rally, but other observers predicted much smaller numbers. It was reported that around 80,000 KCTU members were expected to participate actively.

Day-to-day activities were expected to face disruptions in a number of sectors as a number of affiliated labor unions for the education, civil service, manufacturing, logistics and construction sectors announced earlier that they would participate in the full-scale walkout.

Authorities had warned they would respond sternly to the rally, vowing to penalize anyone breaking virus control rules. Korea plans to officially begin a return to normal next month as the COVID-19 pandemic has taken a heavy toll on its economy.

“The KCTU’s nationwide walkout plan could threaten the virus situation that has been improving recently after hardship while destroying the expectations of a return to normalcy at this very important turning point,” said Minister of the Interior and Safety Jeon Hae-cheol in a meeting Wednesday.

“We urge the KCTU to retract its walkout plan in concern of public sentiment and the efforts made so far on controlling the outbreak. Any illegal activities will be sternly responded to with zero tolerance.”

It remains to be seen whether the authorities will actually penalize those infringing virus rules in light of their reputation for leniency toward labor groups. Wednesday’s nationwide walkout is not the first mass-scale event that the KCTU has launched in defiance of virus rules, and the government has not been active in penalizing those involved in previous rallies.

On July 3, 4,701 KCTU members gathered in central Seoul to demand changes to labor laws and a higher minimum wage. KCTU members from all over the country gathered for the event. The labor group pushed forward with the rally despite repeated requests from the government.

Yet its leader, Yang, was the only one arrested, and KCTU members continued to stage small-scale rallies in Seoul to oppose his arrest. The police took no other action to penalize protesters.