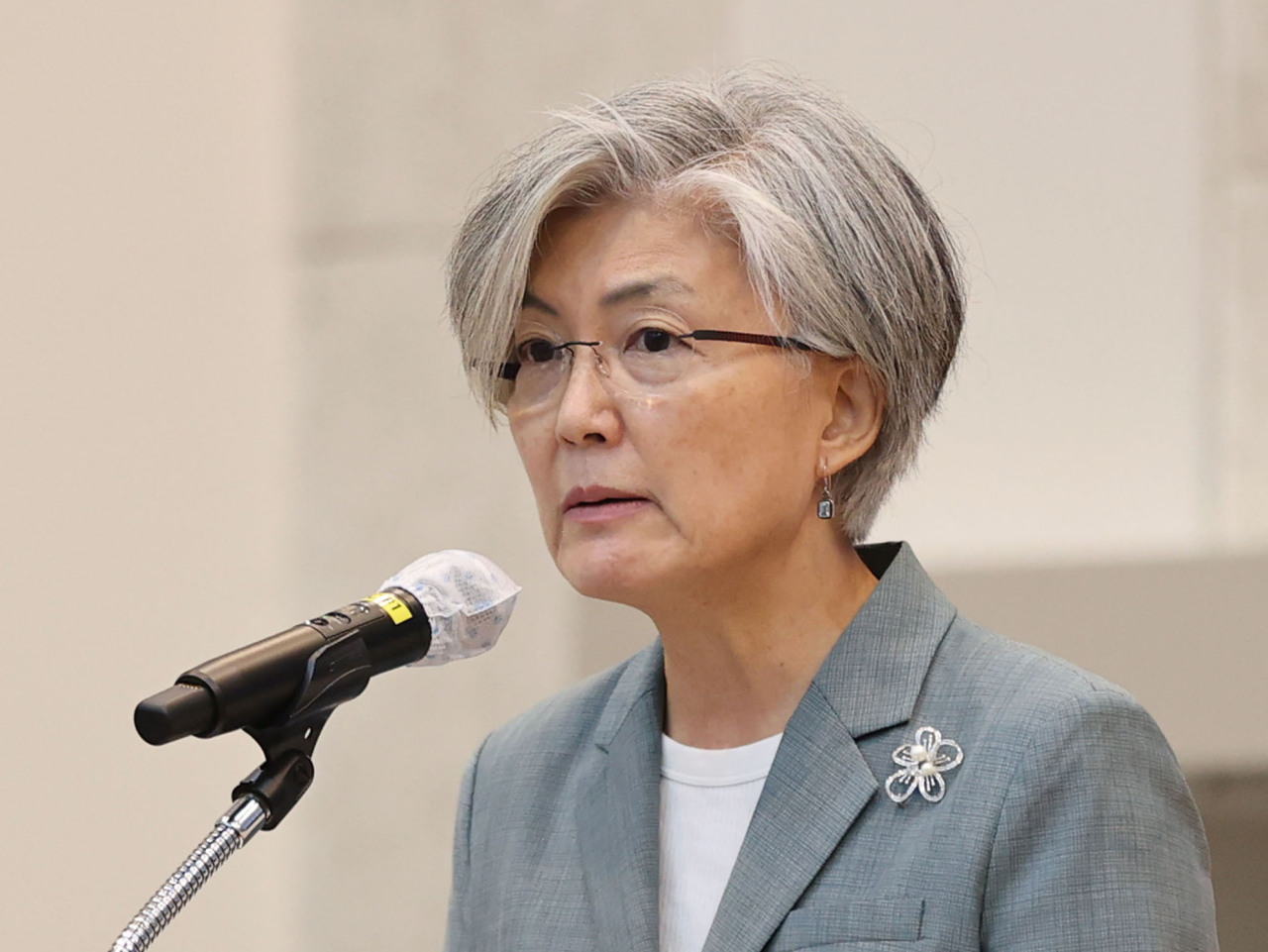 Former Foreign Minister Kang Kyung-wha, now a distinguished professor emeritus at Ewha Womans University, gives a special lecture at the university in September. (Yonhap)
Former Foreign Minister Kang Kyung-wha’s bid for the post of director general of the International Labor Organization is being met with criticism from labor groups, while the government backs the bid that could see the first woman and first Asian leader in the organization’s 103-year history.

The election is slated for March. If Kang gets the job, her term would start next October, when current Director General Guy Ryder of the UK leaves the office.

The South Korean government views that Kang’s bid could be a major diplomatic feat, pinning high hopes on her potential victory in raising the status of the country as a “developed country in labor matters” and breaking the glass ceiling for more female and Asian officials to take leadership positions in international organizations.

“Candidate Kang is considered to have the leadership, quality and competence to lead key ILO agendas, such as job recovery amid the COVID-19 pandemic, overcoming the economic crisis and spreading the win-win spirit and solidarity through tripartism of labor, management and government,” the Foreign Ministry said, backing her nomination.

It said Kang is expected to make a significant contribution to eradicating discrimination and violence against vulnerable laborers around the world, including women, based on her expertise and experiences on the international stage in efforts to support developing countries and protect women’s rights.

But the 66-year-old’s bid has brought mixed reactions in her own country, especially from labor groups citing her lack of relevant experience required for the job.

The Korean Confederation of Trade Unions, one of the country’s two umbrella labor organizations, condemned Kang’s qualifications, saying her experiences and stated vision are “quite far” from the job description to lead the ILO.

“Reflecting her lack of experience in the field of labor, Kang has failed to present her views on the ILO’s most important role,” the KCTU said in a statement, stressing that a core function of the ILO is to establish international labor standards and watch and oversee their implementation.

The KCTU noted that while other candidates provided specifics on how they could strengthen the ILO standards and supervisory system, as well as its tripartite structure in line with the rapidly changing world, Kang has avoided tackling them.

Instead, Kang touted relevant labor experience on her vision statement, which includes South Korea’s ratification of three key ILO conventions during her term, the ministry’s organizational changes to ensure gender equality and work-life balance and the establishment of the union for staff at diplomatic missions overseas.

Nevertheless, those backing the former foreign minister believe Kang’s unrivaled experience and expertise on the international stage could make up for her apparent shortcomings.

A veteran of multilateral diplomacy, Kang is widely respected for her leadership as the country’s first female foreign minister from 2017 to 2021, during which she witnessed historic summits with North Korea and other diplomatic accomplishments during a particularly tumultuous period. Before her stint as a minister, Kang enjoyed a long career at the United Nations, serving as a senior policy adviser for both former Secretary-General Ban Ki-moon and current Secretary-General Antonio Guterres.

In 2006, she was appointed as a deputy high commissioner at the UN Human Rights office -- equivalent in position to the UN deputy secretary-general -- making her the first Korean woman to hold a high-level position in the UN.

Her impressive resume’s lack of labor issues, however, raises concerns for many, considering that other candidates for the top ILO job come with vast experience in labor.

The four other contenders in the election include current ILO Deputy Director General Greg Vines of Australia, President of the International Fund for Agricultural Development Gilbert Houngbo of Togo, who served as deputy director general of the ILO in the past, former French Labor Minister Muriel Penicaud and Mthunzi Mdwaba of South Africa, vice president of the International Organization of Employers.


Beyond Kang’s capacity, critics also question whether South Korea as a country is ready to claim leadership in the field of labor, citing the country’s track record in the violation of labor rights.

Since 2015, South Korea has received the second lowest grade in the six-point Global Rights Index published annually by the International Trade Union Confederation, which rates countries based on compliance with workers’ rights.

Koreans also work among the longest hours of developed countries. Death by overwork has become a serious issue here, known as “kwarosa” locally.

Last year, South Korea ranked third in annual working hours among the 36 members of the Organization for Economic Cooperation and Development, longer by about 200 hours than the average of OECD countries. For all those hours worked, however, Seoul’s labor productivity is in the lower ranks of the group.

“Becoming a developed country of labor matter doesn’t come at free cost,” said Oh Hyun-joo, spokeswoman for the minor progressive Justice Party. “In order to become a country that produces a leader of an international organization, it needs to meet the minimum (labor) qualifications domestically.”

As a specific example, she mentioned the need to free Yang Kyung-soo, chief of the KCTU, who was arrested last month for staging mass rallies in violation of COVID-19 regulations. “It is shameful for the country to go after the ILO bid when the head of the labor union is under arrest,” she said.

Oh also took issue with the notion that South Korea still has not ratified the last of the ILO’s eight key conventions, No. 105 on the abolition of forced labor. Despite calls from labor activists around the world, officials here view that it is still premature to abolish No. 105, as it conflicts with the nation’s security law.

Three core ILO conventions, No. 87 on the freedom of association, No. 98 on the right to organize and collective bargaining and No. 29 on the prohibition of forced labor, were finally ratified in February after years of debate, but observers view Korea as still lagging behind international standards in protecting labor rights.