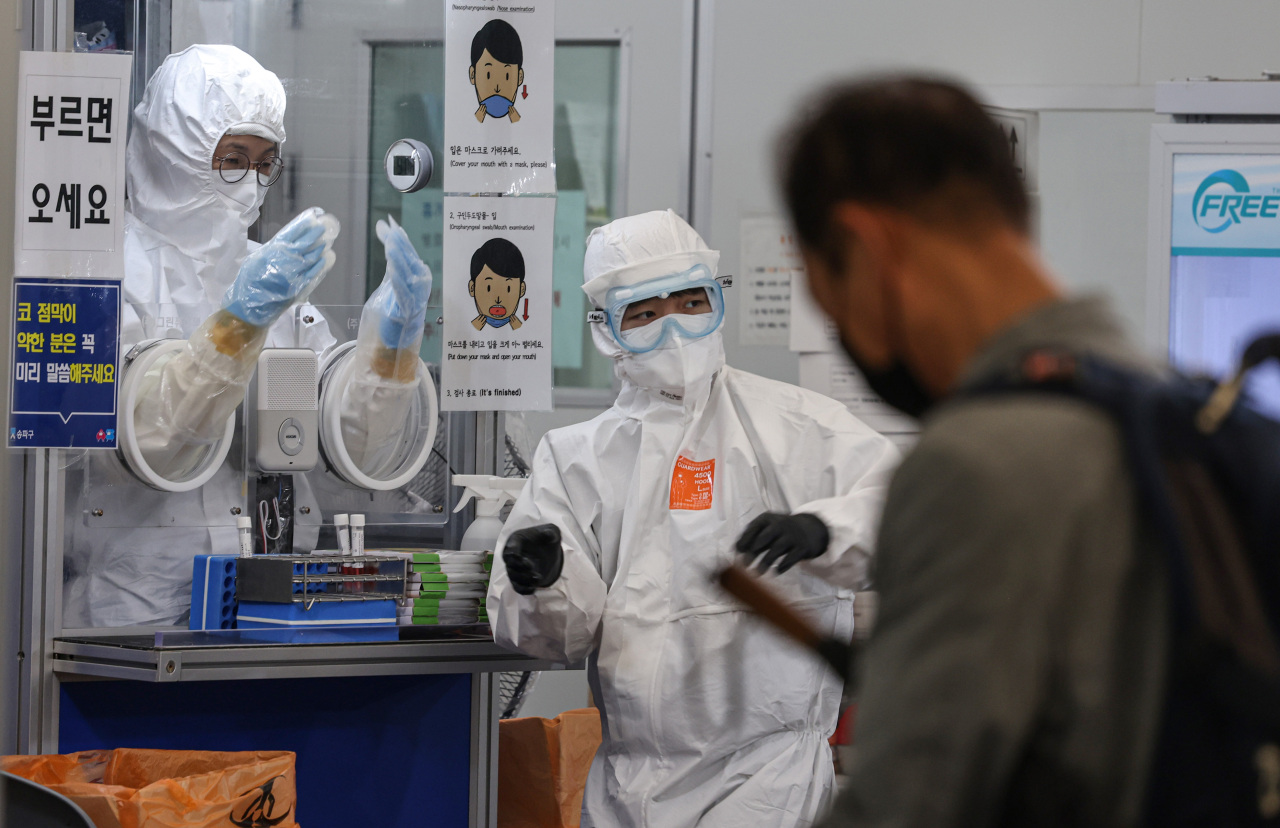 South Korea’s plans to get back to a normal life are beginning to take shape, with about less than a month left until the vaccine goal is projected to be cleared.

As of 4 p.m. Monday, more than 40 million people, or 77 percent of the nation’s population, had received their first vaccination against COVID-19, according to the Korea Disease Control and Prevention Agency’s update. Some 30 million, or 59 percent, had received two full doses or a one-dose Johnson & Johnson vaccine.

The government projects that at least 70 percent of Korea’s population of 51 million will be fully vaccinated before the end of this month, after which the country will pivot from managing all patients with COVID-19 to only those requiring hospitalization.

Starting this week through November, “booster” vaccinations for front-line health care workers and adults aged 60 and older are set to become available. Minors as young as 12 and pregnant women will be offered their first vaccination from this month, too.

The Moon Jae-in administration’s COVID-19 response headquarters, led by the Prime Minister’s office, told reporters Monday its committee for recovery of normal life will be holding its first meeting sometime this week. Advising the committee are outside experts in economics, culture, health and other fields, it said. The newly organized committee replaces the one for sustainable social distancing that has been in place for the past year and a half.

The headquarters has termed the exit from harsh restrictions after reaching the vaccine target a “phased return to normal,” also dubbed “living with COVID-19.”

The headquarters has yet to disclose over how many phases there will be, or what each phase may entail, but one of the most prominent expected changes is the expansion of at-home COVID-19 care. Previously, all patients were treated either at hospitals or facilities known as community treatment centers, with exceptions being made for children too young to be separated from their caregivers.

People under 70 without risk factors for severe COVID-19 will no longer need to be treated at facilities, the Ministry of Health and Welfare said ahead of the weekend, as a part of an announcement on the anticipated move toward normal.

Jeong Eun-kyeong, the national health protection agency’s chief, pointed to Nov. 9 as “when the return to normal may begin” in an audit response last week.

The audit by the National Assembly’s health and welfare committee revealed that the agency’s internal models predicting up to 5,000 cases occurring per day in a worst-case scenario in late October, which is about the levels the Health Ministry has earlier said that the health care systems are equipped to handle.

Although the number of cases logged per day has come down from a peak of over 3,000 seen in late September to about 2,000 in the past week, Korea remains tight on beds, with hundreds of patients waiting to be admitted until recently. The expanded guidance for home care that took effect on Sept. 25 is expected to ease the bed crunch.

In all of Korea there are 1,039 intensive care beds for COVID-19 patients, of which 496 were occupied by 5 p.m. Saturday. Out of 452 semi-intensive care beds, 258 were full. There were 5,256 hospitalized non-ICU patients. The 20,000 beds at 90 community treatment centers for mildly sick patients were running at 48 percent capacity.

As of Sunday midnight, there were 3,145 patients in home care nationwide.

According to the guidance released Sunday by the Health Ministry, patients classified as having mild cases of COVID-19 will be prescribed home care if they are younger than 70 and don’t have any risk factors. Patients 70 or older can stay home on the condition that they can be cared for by a caregiver or a support person who is fully vaccinated.

The risk factors outlined by the guidance include chronic conditions of the heart, lungs or kidneys; immunocompromising treatments such as dialysis, chemotherapy and immunosuppressant drugs; high-risk pregnancy; and a body mass index greater than 30.

Home care cannot be given to patients living with people at risk of severe COVID-19 or in vulnerable accommodations such as dorms, as well as patients who are not capable of communication -- including foreigners who don’t speak Korean -- as all monitoring is done remotely.

While in home care, patients are checked in on once or twice a day by health care providers via phone or video. Patients will be asked to report changes in temperatures and oxygen saturation levels. For every 100 patients, at least one doctor and two to three nurses will be assigned.

Patients must stay at least two meters away from other household members. Bathrooms, kitchen and other shared spaces should be cleaned and disinfected every time they are used.

People who live in the same household will need to isolate alongside the patient over the 10 days -- and an extra 14 days if they are unvaccinated. At the end of the isolation they are required to take a PCR test.

Those breaching the isolation directive may face up to a year in jail or 10 million won in fine. They may also be ordered to wear a wristband that tracks their movements.

All household waste created while the patient is still infectious is considered hazardous, and it must be discarded in special bags provided by the district’s public health center at least 72 hours after isolation is lifted.

In the event of an emergency, patients can reach the district’s official in charge through a hotline operating 24 hours. The official will then consult the medical personnel to decide if they need to be transferred to a hospital.

Even if patients meet the conditions for home care they may be able to opt against it depending on the bed availability in the region, in which case they will be accommodated at medical facilities instead.