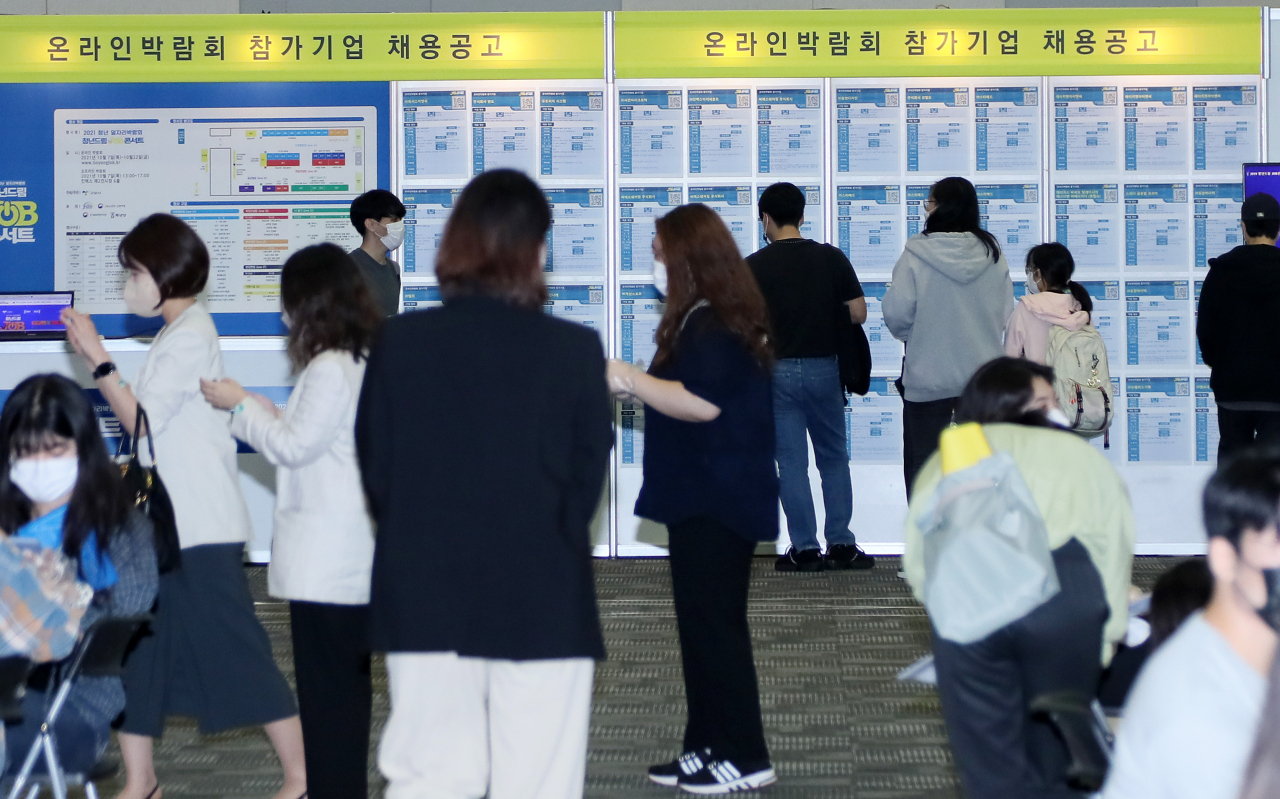 People gather in a job fair at Kintex in Goyang, Gyeonggi Province, Thursday. (Yonhap)
SEJONG - South Korean hiring is showing signs of recovery, though it is hard to say that the uncertainty has been lifted amid the ongoing pandemic situation.

A small rebound in the employment index could be seen in recent figures for the portion of “unemployed plus underemployed” of the economically active population.

According to the Supplementary Index III for Employment, compiled by Statistics Korea, the portion of unemployed or underemployed -- known as the “de facto” or “extended” jobless rate -- posted 12.3 percent in August. 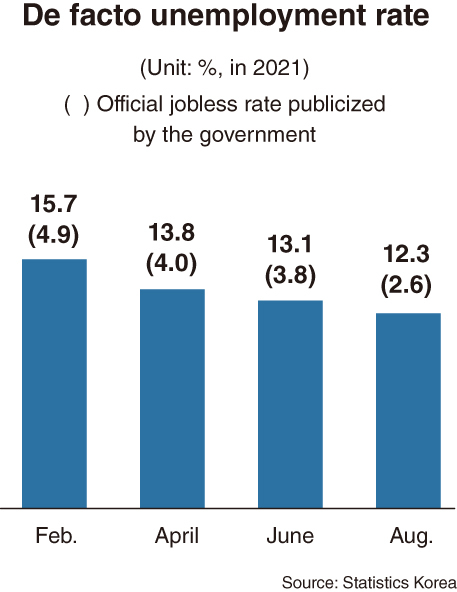 (Graphic by Kim Sun-young/The Korea Herald)
This was the second-lowest figure (tied with the figure for February 2020) since January 2020, when COVID-19 initially hit the nation.

The Index III, a relatively new method for calculation by the government, regards underemployed people -- those who work less than 36 hours a week and want to work more hours, as well as seasonal workers who are out of work for part of the year -- as unemployed.

The latest figure of 12.3 percent was a 1 percentage point improvement on-year.

Nevertheless, the figure indicates that about 1 in 8 Koreans were seeking jobs as of August 2021. And the de facto employment rate was still higher than the August figure for the 2016-19 period.

The figure of 12.3 percent indicates that 3.7 million of the 30.2 million economically active population were unemployed or underemployed as of August 2021.

The figure is nearly five times higher than the nation’s “official” tally for the unemployed at just 744,000, or 2.6 percent in jobless rate.

While the official data does not include the underemployed in the tally, an official of the Washington-based International Monetary Fund had pointed out that Korea’s method for calculating the unemployment rate failed to reflect the reality facing jobseekers.

A local analyst also said the government needed to actively notify the public of hiring data based on the Supplementary Index III for Employment.

The contrasting figures are also seen in the youth jobless rate. The government said the official unemployment rate for those, aged between 15-29, posted only 5.8 percent in August with the number of unemployed in this age group at 243,000.

But the Index III showed that the de facto jobless rate for those aged between 15-29 reached 21.7 percent in the same month, or 1.05 million people.

This means that at least 1 in 5 young Koreans are still looking for jobs, despite improvements in the index.

A labor researcher in Seoul said the coming index for the third quarter, when the delta variant of the coronavirus hit the nation and world, would be the barometer to assess the yearly hiring market.

International comparison shows that the local job market is particularly tight for women.

According to the Organization for Economic Cooperation and Development, South Korea posted a 66.4 percent employment rate for the second quarter. The figure is calculated as the portion of those employed among the working-age population, which is those aged 15-64.

This placed the nation in 27th of 36 OECD member countries. Of the total 38 OECD members, the Paris-based organization has yet to compile or make public the relevant figures of two members -- Ireland and Turkey.