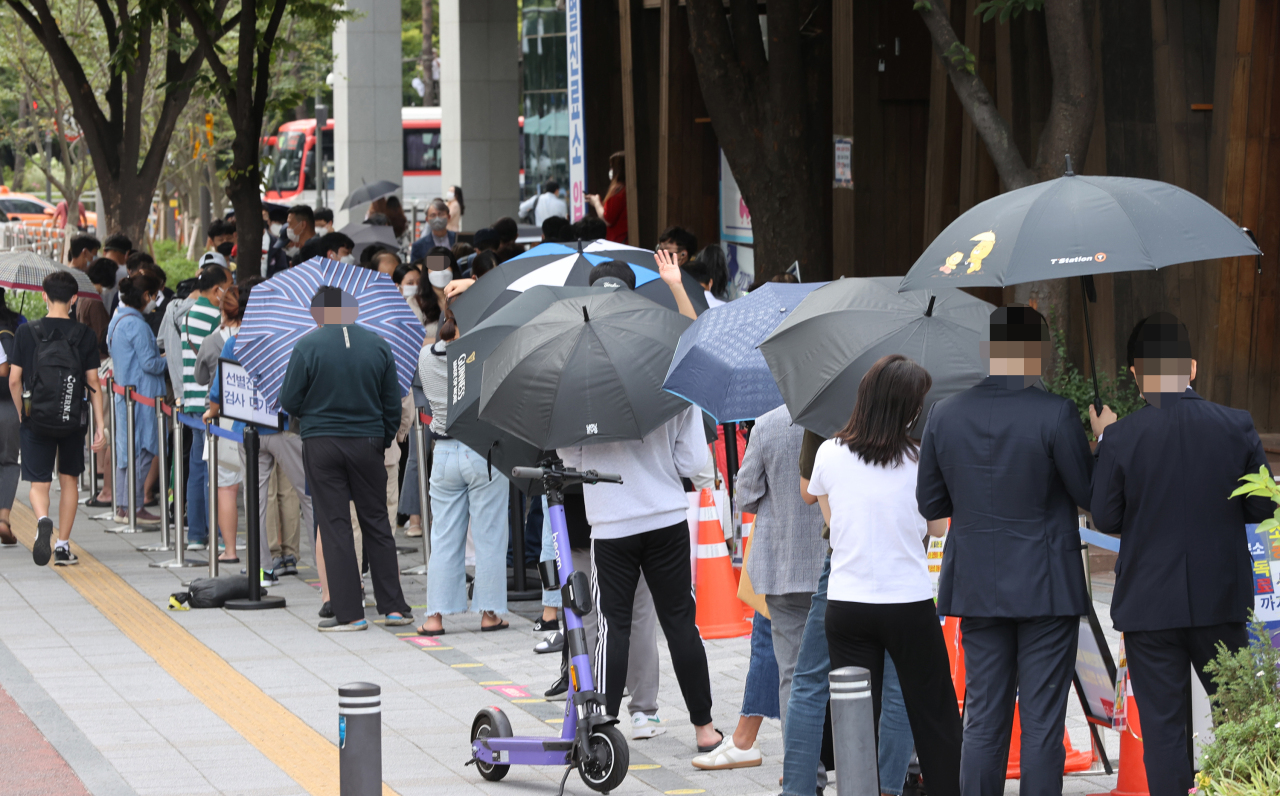 People stand in line to receive coronavirus tests at a screening clinic in Seoul's Songpa Ward on Tuesday. (Yonhap)
South Korea's daily coronavirus cases remained in the 2,000s for a third day Tuesday as infections spiked outside the greater Seoul area in the aftermath of a mass migration during the Chuseok holiday.

The country reported 2,289 new COVID-19 cases, including 2,270 local infections, bringing the total caseload to 305,842, according to the Korea Disease Control and Prevention Agency (KDCA).

The daily caseload touched a fresh high of 3,272 on Saturday before slightly falling to 2,771 on Sunday.

Health authorities were cautious about a possible nationwide spread of COVID-19 as the mass migration during the Chuseok holiday is expected to accelerate the virus spread across the country.

The country added eight more deaths from COVID-19, raising the death toll to 2,464.Daily cases have stayed over 1,000 for the last 84 days despite the country having implemented the toughest virus curbs to slow down the nationwide spread.

The greater Seoul area has been under Level 4 distancing measures, the highest in the country's four-tier system, since July, with most other areas being under Level 3.

Health authorities will decide whether to extend the current distancing rules or not Friday.

The greater Seoul area is still the hotbed of the country's fourth wave of the pandemic, which started in early July.

Of the locally transmitted cases, the Seoul metropolitan area, home to half of the nation's 52 million population, took up 74 percent of the total.

After the Chuseok holiday, more infections were reported outside of the greater Seoul area.

Over the last week, foreign residents accounted for about 16 percent of newly confirmed cases, with their full vaccination rate reaching 24.4 percent, it said.

Also, the authorities expected a phase-in scheme to get back to normal life to start in late October or early November, as the vaccination rate rises.

Imported cases came to 19, including six from the United States.

The number of patients with serious symptoms across the country reached 324, up five from the previous day.

The total number of people released from quarantine after making full recoveries was 270,928, up 1,796 from a day earlier. (Yonhap)