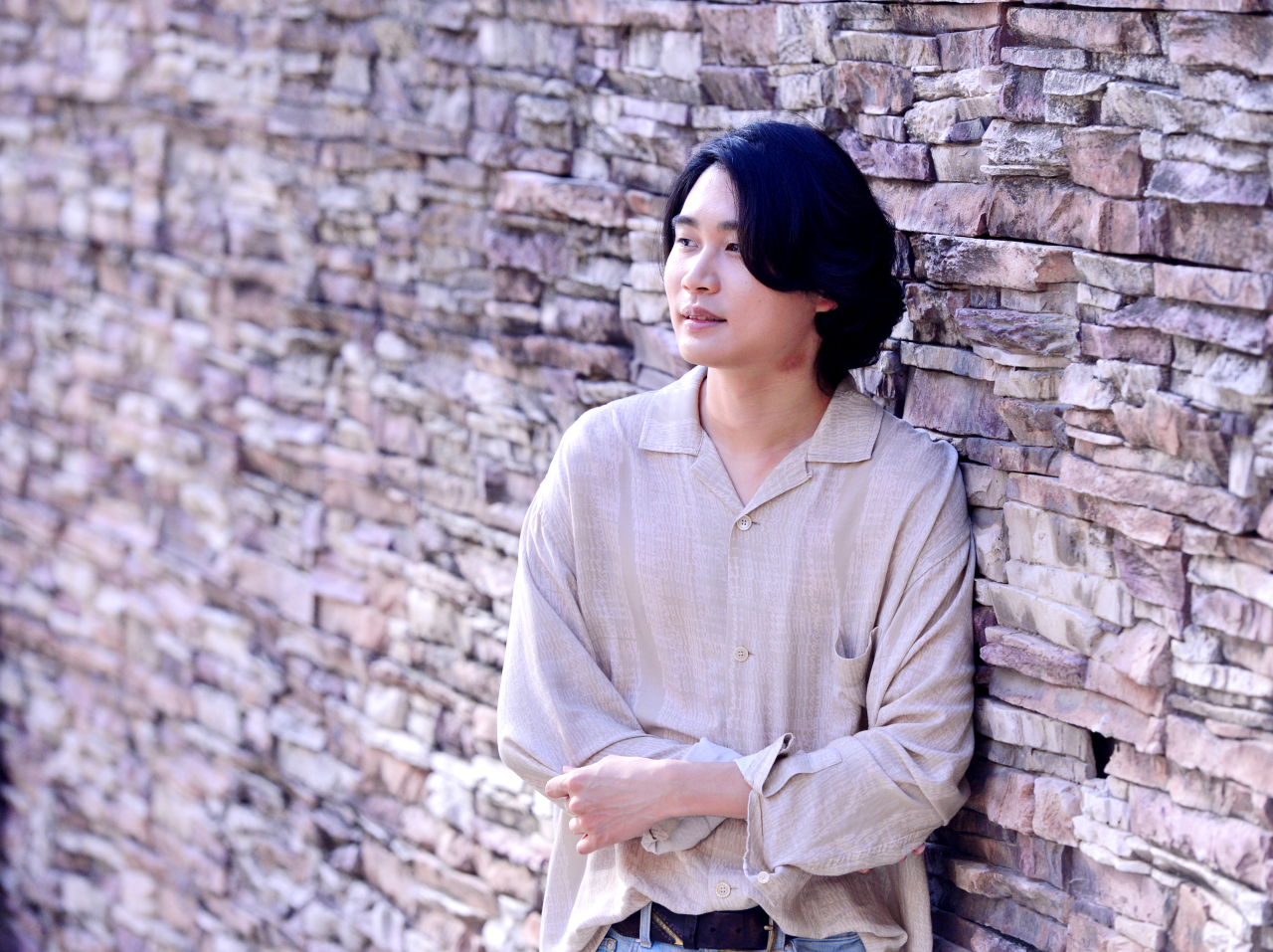 Violinist Yang In-mo poses before an interview with The Korea Herald on Sept. 14. (Park Hyun-koo/The Korea Herald)
A colorful postcard bought in Amsterdam “just because it was so pretty,” notes and letters from friends and a large card with black-and-white graphics -- a ticket to a show by a Korean electronic music group from two years ago he kept because he was very impressed and wanted to remember it -- are lined up neatly inside violinist Yang In-mo’s violin case, affording a glimpse of his taste. “I think it is fun to decorate the interior with postcards like this,” he says during a recent interview with The Korea Herald.

The violin case holds four bows. The first and second bows from top have been made by French bowmaker Benoit Rolland. “These are customized bows that he made for me while I was studying at the New England Conservatory of Music,” Yang says. The bows were made after long conversations between the violinist and the bowmaker. The one Yang uses most often now was created in 2019.

Next is a Vigneron bow that he has had since his middle school days. He doesn’t use it anymore, but it holds a lot of memories, Yang says. “It is slightly heavier than other bows and I remember it being a bit cumbersome when I used it,” he says, recalling his younger days.

Yang introduces the next bow with a chuckle. “This is a bow I bought on Amazon for $50,” he says. “It is very strong because it is made with carbon fiber,” Yang says. This is the bow that he turns to when he does not want to put the more expensive bows through too much stress, as when he is playing contemporary pieces that call for techniques that are taxing on the bow, Yang explains.

The 26-year-old violinist plays on a composite Stradivarius on loan from an anonymous private donor. The top plate was made in 1705 and the back plate made in 1714. The scroll is not a Stradivarius, but an Andrea Guarneri, according to Yang. “These parts were assembled in the 1980s, 1990s to create a new instrument,” says Yang. “That is why, while it has the characteristics unique to a Stradivari, it makes a more interesting sound,” says Yang. “Sometimes it makes an edgy sound and it of course has the warmth that is unique to Stradivarius,” Yang says about his “hybrid” violin.

Yang picked up the violin when he was 5. “I just remember going to an instrument store and my mother asking if I would like to try the violin,” he says. “For me, the process of making sound was a lot of fun,” he says. The violin is an instrument that takes a long time to make a sound, Yang points out, compared to the piano which can produce a “pretty sound” just by pressing on the key. “I think I have been mesmerized by the appeal of creating and polishing sounds,” he says.

Following his debut recital at age 11, he had his concerto debut at 15 with the KBS Symphony Orchestra. Yang studied at the Korea National University of Arts as a music prodigy before going on to study at the New England Conservatory of Music in Boston from 2013-2019. He is pursuing a master’s degree at Hochschule fur Musik in Berlin.

In March 2015, he won the first prize at the Paganini Competition, marking the first time since 2006 that the jury awarded the top prize. Just a few months shy of 20, he also received several special prizes: the youngest finalist prize, best performance of a contemporary original piece prize and performance most appreciated by the audience.

In Korea, Yang was the Kumho Art Hall artist-in-residence for the 2018 season. As part of his residency, he gave a performance of Paganini’s 24 caprices which was recorded live and released under the Deutsche Grammophon label in November 2018. 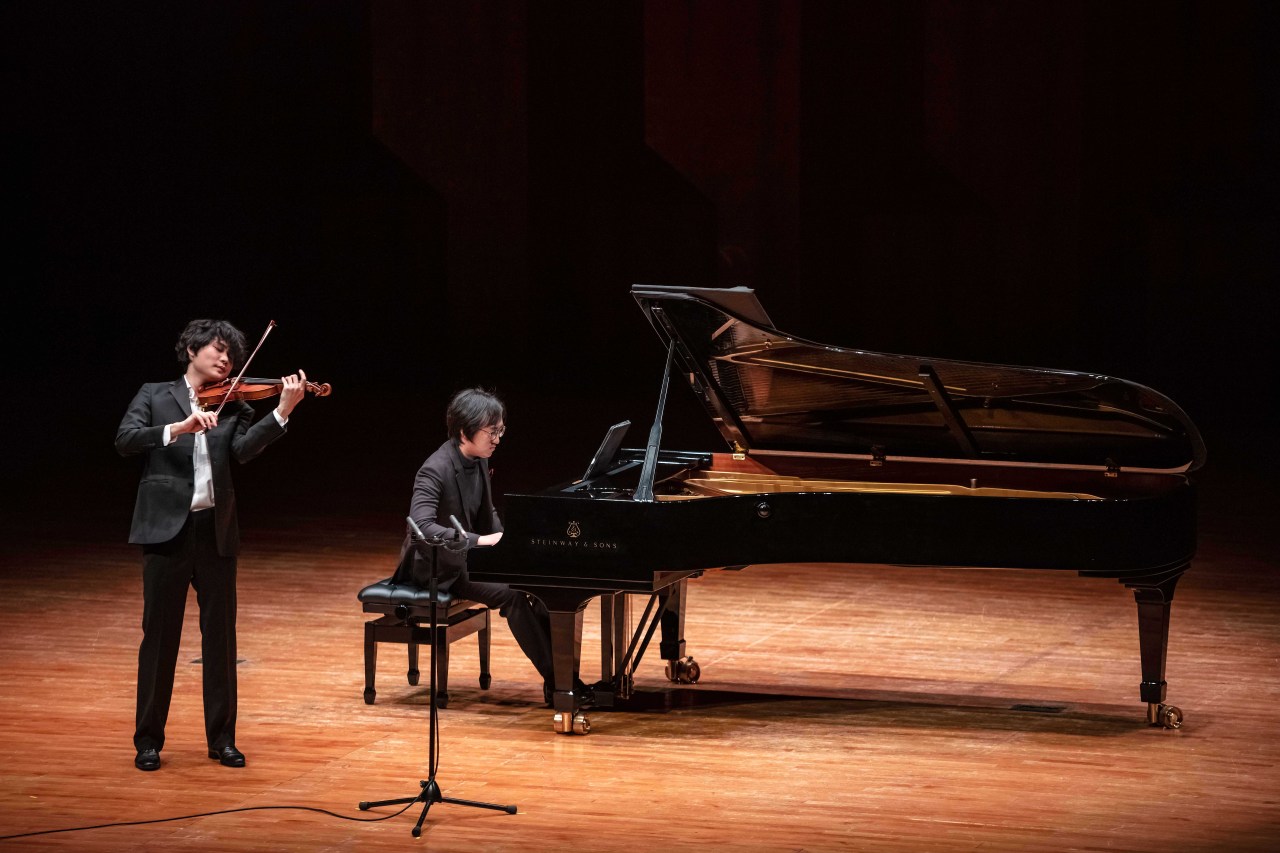 Violinist Yang In-mo peforms in a recial marking the release of his album “The Genetics of Strings” with pianist Hong Sa-hun at the Seoul Arts Center Concert Hall on March 13. (Moon Hyuck-hoon/Credia)

In March, Yang returned with his second album, “The Genetics of Strings,” also with the Deutsche Grammophon. The title aptly captures the spirit of the album which explores the materiality and history of the string.

The 11-track album starts with Yang’s own composition and improvisation based on vocal music by 12th century abbess Hildegard von Bingen, continues on to the Baroque period and skips to the 20th century with “Gypsy Melody” by Rodin Schedrin. With violist Richard Yogjae O’Neill, Yang performs Handel’s Sarabande reinterpreted and extrapolated by Norwegian composer Johan Halvorsen (1864-1935).

The variation on Sarabande is followed by four pieces from Astor Piazzolla’s “History of Tango” and Maurice Ravel’s Tzigane rearranged for the violin and harp. The fleeting, ephemeral sounds made by the bow just barely touching the strings, which Yang likens to floating ashes, make up Salvatore Sciarrino’s “Capriccio No. 2,” a fitting conclusion to the album that began with Hildegard’s praise of the Holy Spirit, associated with fire.

“I wanted this album to be an album that only I could make,” says Yang about the concept of “The Genetics of Strings.”

“I wondered how my portrait, if there were to be one, would be painted. I thought about what story would be the most relatable and powerful in telling my story,” says Yang. That led him to explore the strings. “I became curious about strings as a material. I have been touching this material with my hands since I was 5 and the sound that I make come from the strings. I then began investigating the strings,” Yang says.

His research led him to conclude that the history of strings, the changes the strings underwent as they came to be used in musical instruments, the changes in materials and the changes in tension could form a single story. “I thought this could be told in an album and once I started thinking this way, many doors opened,” he says.

Since the album deals exclusively with strings, a number of works were rearranged to feature different string instruments, replacing other instruments. For the first track “Inspirations from Hildegard von Bingen’s ‘O ignis Spiritus paracliti’” Yang enlisted soprano Im Sun-hae to sing the vocal part. “The album is about strings, but I thought it would be good to start with a human voice. I wanted to show a very human side of strings,” he says.

Inspiration has many meanings but Yang is referencing the act of drawing in breath in the title of his first commercial composition. “The reason it is titled ‘Inspiration’ is because without oxygen, there is no combustion,” Yang says. “It is only when I inspire, when a new energy comes inside me, an input, that an output can be created,” Yang says.

Although Yang sometimes refers to it as a rearrangement, it is more of a composition. And Yang expresses satisfaction with his first composition. “I read around 20 papers and focused on thinking about the aesthetics of the Middle Ages. Would vibrato have been considered beautiful back then? We don’t know,” Yang says. Rather than focusing on recreating the aesthetic values of that era, Yang decided to focus more on what it means to reinterpret the work today. “I read many books, listened to many recordings and put myself into the period when, unlike today, life and religion were one,” Yang says.

A polymath, Hildegard also saw visions. “I think she is better known as a writer or a visionary than as a composer,” says Yang. “Music was a way to remember a prophecy or a vision. I felt the presence of these unusual forces and those aspects had an influence on my rearrangement,” Yang says.

Asked about his favorite piece in the album, Yang says without hesitation, “Corelli.” He is referring to Arcangelo Corelli’s Sonata in D minor “La Follia” op.5/12.

“Tuning the strings low and playing with a harpsichordist and a Baroque cellist was something I had never done before. But I have always liked early music,” he says. While it was a big challenge, the result was very good, according to Yang. “I realized that the allure of early music is in how each performance is different,” Yang says.

Now that he has covered the history of strings in a single album, what next?“With each album, I would like to show how my identity as an artist is changing, how this DNA is changing,” he says. He might also focus on a specific period, composer or strings that he is particularly attracted to.

And he definitely wants to continue with composing. “I think creation has power when it is done because I don’t think I can continue to breathe without expelling it. The Hildegard piece involved that process,” Yang says.

“The creative process is endless,” Yang says. “You have to know when to stop. This is a moment when pain and ecstasy coexist for me.”

Apart from composing music, Yang has in mind to one day write a book. “One of my dreams is to write a novel. You know there is that book ‘Perfume.’ If that book is about the olfactory senses, I would like to write a novel that deals with the aural senses,” he says.

When Yang reads, he makes annotations, taking note of how certain words are used. “I read thinking about how I would like to use certain expressions when I write my novel. I read thinking that it is an investment in my future,” he says.

By the way, he is a fan of Hermann Hesse, counting “Narcissus and Goldmund,” a story of friendship between “an impulsive and free-spirited Goldmund and Narcissus, a very dedicated monk,” as the book that has impressed him the most.

“The very short, concise sentences contain so many meanings,” says Yang in explaining why he is drawn to Hesse. While the violinist and future author also really likes the Hesse’s other works, such as “Demian” and “Steppenwolf,” “Narcissus and Goldmund” is the book that he would take with him to his grave, he says.

Before the interview proper began, I noticed a tattoo on Yang’s left arm. I stepped up closer to make out the somewhat crude letters -- LIEBENZELLER.

It is the name of a group that he has formed with a hip-hop artist friend and a fashion designer friend, Yang explains. The group is named after the brand of rosin that he uses, the violinist adds. The plan is to have artists of various genres join, according to Yang.

It is already an eclectic mix of creative types and I am curious as to what they may produce, especially with Yang, brimming with a desire to create and who revels in the pain and the ecstasy of the creative process, at the helm.