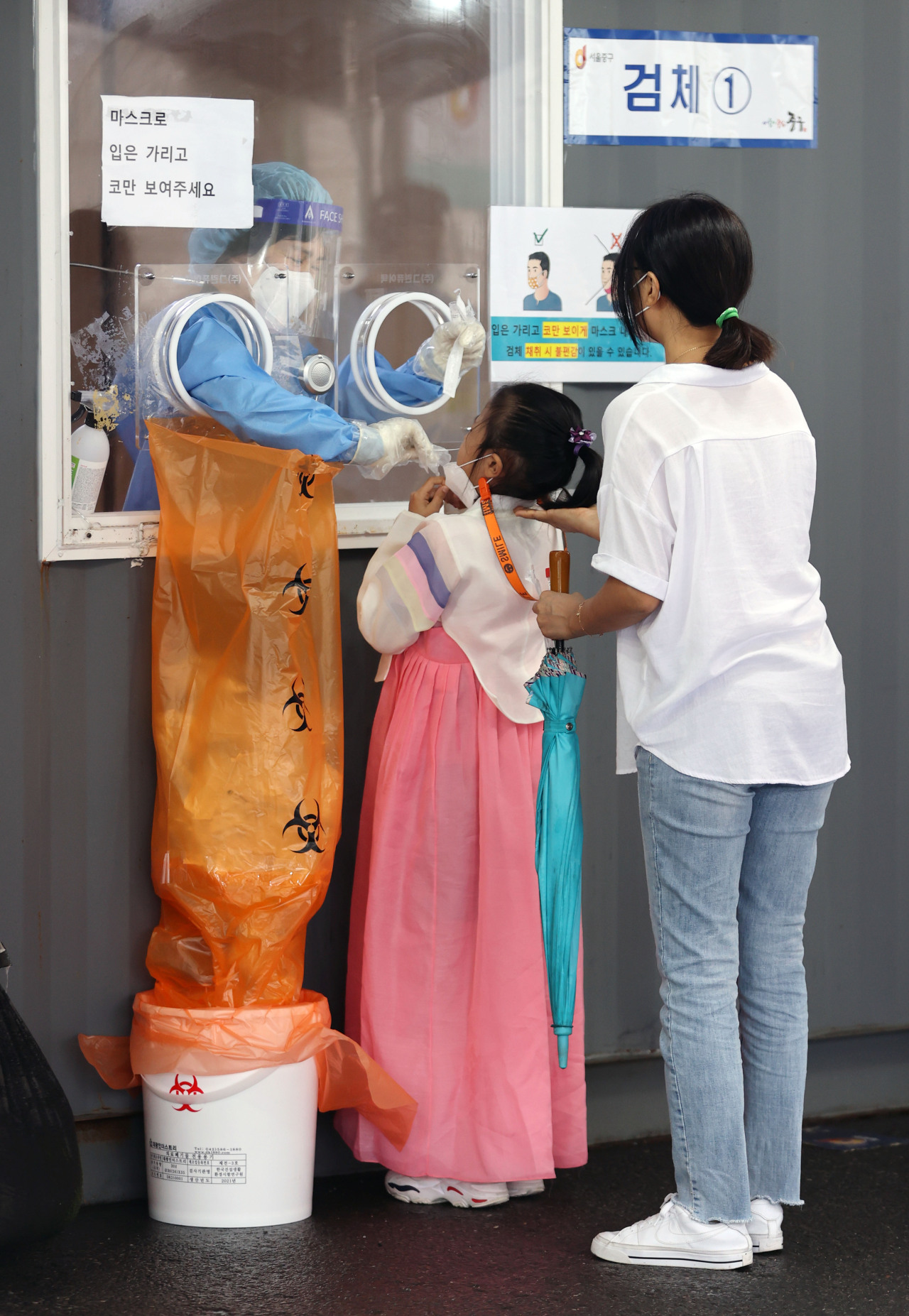 A child wearing traditional Korean clothing hanbok gets a COVID-19 test at a screening station in central Seoul on Chuseok, the Korean harvest holiday, on Tuesday(Yonhap)
South Korea's daily coronavirus cases stayed in the 1,700s for the second consecutive day on Wednesday despite fewer tests during an extended Chuseok holiday, raising concerns over a spike in new infections across the nation after the holiday.

The country reported 1,720 new COVID-19 cases, including 1,703 local infections, raising the total caseload to 290,983, according to the Korea Disease Control and Prevention Agency (KDCA).

The latest caseload was slightly down from 1,729 on Tuesday, but it was seen as mainly attributable to fewer tests over the fall harvest Chuseok holiday, which runs from Monday to Wednesday.

Daily cases have stayed over 1,000 for the last 78 days amid the fast spread of the more transmissible delta variant nationwide.

The country added six more deaths from COVID-19 on the day, raising the death toll to 2,419.

The Seoul metropolitan area, home to half of the nation's 52 million population, has emerged as the hotbed of the country's latest wave of the pandemic, accounting for 77 percent of the total.

Health authorities have expressed concerns over a further hike in cases after the major holiday, as a large number of people have been traveling across the nation.

Earlier this month, the government extended the highest social distancing rules of Level 4 of its four-tier system for Seoul and the surrounding Gyeonggi Province and Level 3 for other regions until Oct. 3, limiting the size of private gatherings and restaurant business hours.

But it eased some restrictions, allowing family gatherings of up to eight people on the condition that four of them are fully vaccinated.

Instead, it has been enforcing special quarantine steps, such as running makeshift test centers at major bus terminals and train stations to detect patients at an early stage.

Of the newly confirmed domestic cases, 641 cases came from Seoul, 528 from the surrounding Gyeonggi Province and 145 cases from the western port city of Incheon.

Imported cases, which include South Korean nationals, came to 17.

The number of patients with serious symptoms across the country reached 317, down 11 from the previous day.

The total number of people released from quarantine after making full recoveries was 261,812, up 1,722 from a day earlier. (Yonhap)