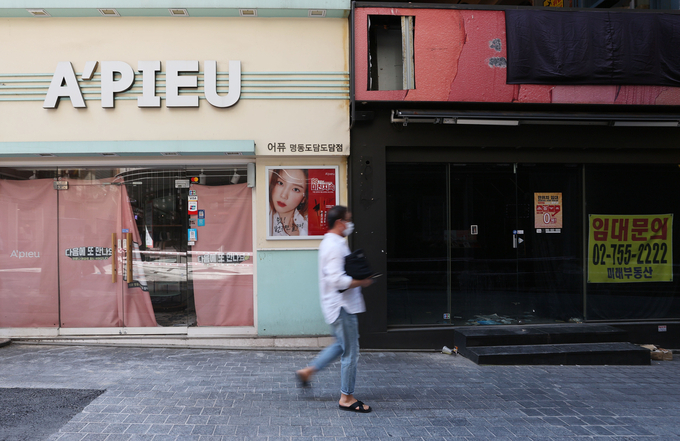 This photo, taken on Wednesday, shows signs for leases put up at stores in the shopping district of Myeongdong in central Seoul amid the protracted pandemic. (Yonhap)
The South Korean economy is facing continued uncertainty about the recovery of domestic demand as the latest resurgence in COVID-19 cases is denting person-to-person service sectors, the finance ministry said Friday.

In its monthly economic assessment report, the ministry said the country's exports have extended solid growth momentum and the job market has improved despite the fourth wave of the pandemic.

"But uncertainty over domestic demand has continued, centering on face-to-face service segments," the Ministry of Economy and Finance said in the Green Book.

The fourth wave of the pandemic and the toughest-ever virus curbs are feared to dampen improving private spending, potentially sapping economic recovery momentum.

For about two months, the greater Seoul area, home to half of the country's population of 52 million, has been under the toughest social distancing rules, which include business restrictions and a ban on private gatherings of three or more people after 6 p.m.

The finance ministry earlier said card spending did not decline amid the current wave of the pandemic in stark contrast from consumption patterns shown during previous flare-ups in virus cases.

Finance Minister Hong Nam-ki said the potential economic fallout of the current wave of the pandemic will be "inevitable" starting in August.