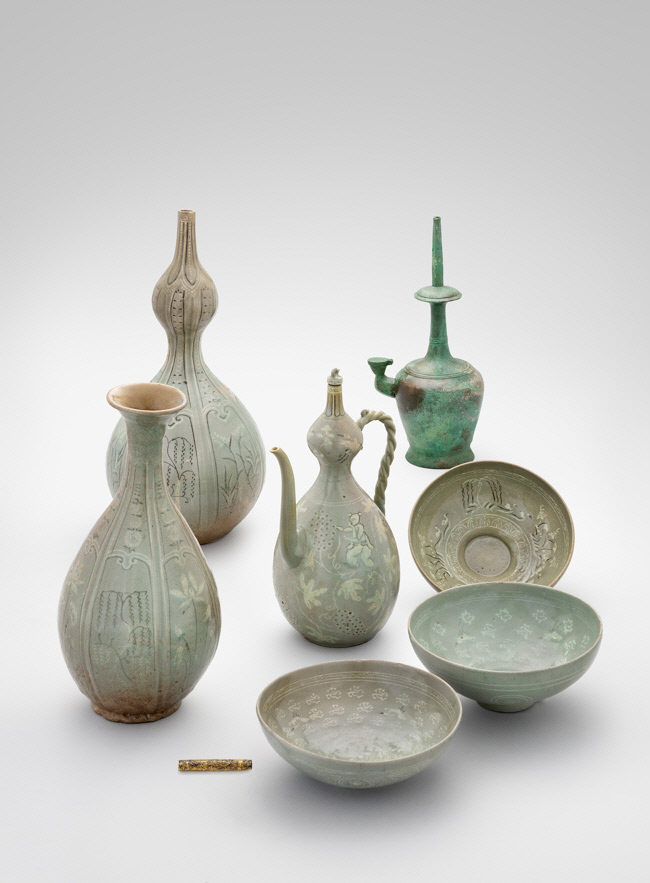 The museum is showcasing eight works of art from the Goryeo Kingdom, which are part of a collection at the Royal Museums of Art and History in Brussels.

It is the first time the six celadon vessels and two metal items are being shown to the public since undergoing conservation and restoration work at the National Research Institute of Cultural Heritage in Korea.

“In Pursuit of the Aesthetic Legacy of the Goryeo Era” (CHA)
After the exhibition ends, the items will be returned to their home institution in Belgium.

The six celadon vessels are decorated with sanggam inlay, a sophisticated decorative technique used during the Goryeo Kingdom. All the celadon vessels are believed to have been produced in the late Goryeo period, according to the Cultural Heritage Administration.

Five of the celadon vessels once belonged to Victor Collin de Plancy (1853-1922), the first French consul to Korea, who was dispatched in 1888, according to the agency. The items later joined the collection of the Royal Museums of Art and History in Brussels between 1946 and 1947.

A comprehensive comparative analysis of the form, angle, size and design of each gourd-shaped celadon ewer found that the handle and spout of one of the items, “Celadon Gourd-Shaped Ewer with Inlaid Grapevine and Boy Design,” had been inappropriately restored in Belgium. The agency conducted a detailed analysis of data related to Goryeo celadon using 3D imaging and created a new spout and a twisted handle. Also, the mouth and lid of the ewer were restored in accordance with the latest research.

The two metal items were restored with a focus on preserving their original state and slowing the corrosion process as much as possible, the Cultural Heritage Administration said.

In addition to the exhibition, the National Palace Museum of Korea will present the eight works online starting Friday using virtual reality technology. Also, videos documenting the conservation and restoration process and interviews providing insight into the exhibition are available for viewing on the National Palace Museum of Korea website and the YouTube channels of the Cultural Heritage Administration and the museum.